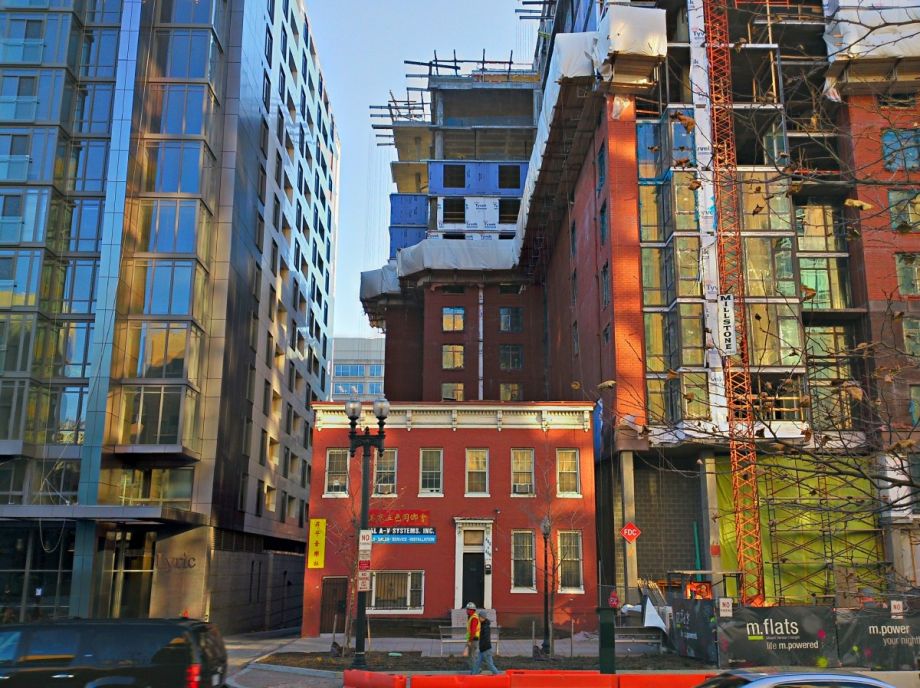 If you’ve ever visited Washington, D.C., you might wonder why the skyline is so horizontal. Why, in the capital of a very, very powerful nation, are most of the buildings roughly the same height as a college dorm?

It’s because of an arcane, century-old law — the Height of Buildings Act of 1910 — that essentially caps building anything in the District above 160 feet.

The Height Act has been a source of debate in Washington for years. Now, the Office of Planning and the National Capital Planning Commission, at the urging of D.C. Congressional Delegate Eleanor Holmes Norton (D) and Rep. Darrell Issa (R-Calif.) has a committee looking at easing the law, which could be costing the city more than a billion dollars, as The Economist’s Ryan Avent notes. The first of four public meetings was held last Monday night.

The Height Act was passed in 1899 in direct response to the 1894 construction of the 164-foot Cairo Hotel. No residential buildings can be built above 90 feet and commercial buildings are capped at 130 feet, except “on the north side of Pennsylvania Avenue between 1st and 15th Streets Northwest,” where buildings can reach the oh-so-terrifying height of 160 feet.

As Matt Yglesias wrote in April, “Tulsa, Okla., where land is not particularly scarce or expensive and there are few compelling reasons to build densely, has 17 buildings taller than 200 feet, with the tallest standing at 667 feet. Fargo, N.D., has two buildings over 200 feet tall. Savannah, Ga., has four. Two hours south of D.C. on I-95 in Richmond, Va., there are 21 such buildings, the tallest of which is almost 450 feet.”

Tulsa, Richmond, Savannah, Fargo — let that sink in. Which is not to say that the aforementioned cities aren’t great. I’m sure they’re perfectly nice cities to live in with good restaurants and good people and good schools. But are they overrun with visitors for conferences, worldwide summits and huge school trips to publicly financed museums and monuments? Do they house one of the most powerful governments on the planet?

Raising the height limit would build long-term equity in Washington in myriad ways. Not only could the added apartments introduced by new high rises loosen D.C.‘s notoriously tight housing market, lowering demand (and, in turn, rents), all the building would create more jobs. And likely, jobs with livable wages. The new construction would create more blue-collar jobs in, well, construction, where you can make a reasonable living without a college degree.

“It would definitely create more jobs for the middle class,” Anthony Frederick, the business manager of D.C.‘s Local 657 Laborers Union, told me. “And we really, truly need them. It’s still real slow. We haven’t overcome the recession yet.”

The income disparity between the rich and the poor in Washington, as Dax-Devlon Ross wrote in an April Forefront story, is staggering, and an influx of respectable-paying jobs could bring the middle class back to the District. If the city is able to build more densely to accommodate this influx of jobs, more affordable housing will likely come as a result. This point that wasn’t lost on Frederick. “You could probably build more affordable housing if they raise the height, too,” he said.

And where do all those tourists stay when they come to town? Hotels in D.C. are shorter than the tallest hotel in my hometown, a small tourist town on Lake Michigan four hours northwest of Detroit. If hotels can build up, it will mean more affordable hotel rooms and make visiting the capital more reasonable for families. These families will eat in D.C.’s restaurants and pay D.C.’s cab drivers and buy Band-Aids and bottled water at D.C.’s corner stores.

It seems like a no-brainer for D.C. to at least ease the Height Act to promote some growth. But the one argument that really drives me up the wall is the desire to maintain the skyline as it stands. Yes, D.C. needs to be sure that the fabric of the city’s history remains intact. And it will. But raising the height limit to promote smart growth and density won’t ruin everyone’s view of the White House. I live in Crown Heights, Brooklyn, and I can see damn near every iconic building in New York, from the Chrysler to the new One World Trade Center, when I walk down Bedford Avenue.

The Washington Monument, as obvious as this sounds, is really tall. At 555 feet, it’s almost 60 feet taller than the historic Guardian Building in Detroit, which, despite the towering Renaissance Center, still plays heavily in the city’s skyline. Loosening the Height Act won’t ruin people’s view. It will just attract more tourists to come to town and spend money.