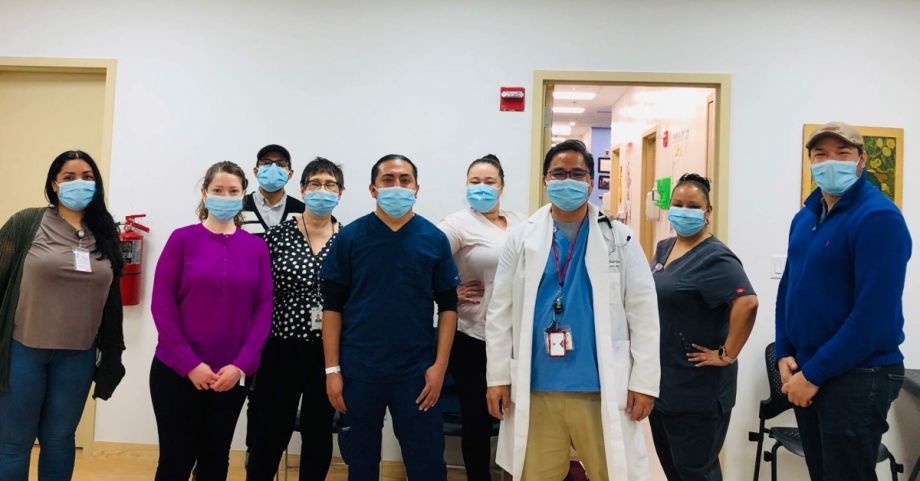 Housing Works providers at one of their clinics. The HIV/AIDS advocacy organization is using lessons learned from the AIDS epidemic to provide treatment with dignity to homeless New Yorkers who have tested positive for COVID-19. (Photo courtesy Housing Works)

“We’re cleaning rooms for those who aren’t able to and it’s a great way to get to know them,” King says of the residents. “I always give people my business card so they see it’s the CEO who is scrubbing their toilet.”

Starting in the 1980s, King participated in protests, sit-ins and office takeovers to demand dignified housing and healthcare for homeless New Yorkers living with HIV/AIDS. That led to the formation of Housing Works in 1990. Three decades of advocacy — and numerous successes — brought Housing Works to this current moment, advocating for and mobilizing treatment and housing for homeless New Yorkers with COVID-19.

“The stigma hasn’t changed,” King says of unhoused people living with mental and physical health challenges. In the early days of the AIDS epidemic, there were physical fears such as spreading the disease through a toilet seat. Opposition to housing for people with HIV/AIDS led to scare-stories about TB epidemics, declining property values, increased drug abuse and crime.

King worried that homeless New Yorkers testing positive for coronavirus faced a double stigma: they wouldn’t be welcome at city shelters while also facing public fear of spreading the virus in public spaces. As the New York Times recently put it, images of homeless people taking shelter in empty subway cars “have become searing symbols of the city’s precarious condition.”

“When a public health crisis like this breaks, the weakest link is what really matters,” King says. “And what weaker link could there be than people sleeping on our streets and in mass congregate shelters with no way to practice physical separation or the hygiene necessary at this time?”

Housing Works is part of a strong advocacy network that emerged out of New York’s last epidemic, HIV/AIDS, and still operates in the city. The network formed a working group in light of COVID-19, which found the city’s Department of Homeless Services was sending COVID-19-positive shelter residents to the emergency room and prohibiting their return until fully recovered. “There was no alternative of where they could go” following the hospital, King explains.

The working group advocated for a solution happening in cities around the country: Use empty hotel rooms to provide safe quarantine housing. As soon as DHS issued a procurement, Housing Works submitted a proposal. It took the organization three days to begin operating a hotel with 150 shelter beds. Unable to rely on the city’s stockpile of protective gear, a former board member donated hundreds of surgical masks, hand sanitizer and disposable hospital gowns.

“Because of our reputation, we know a lot of the key players,” King says of the fast timeline. “Early in the AIDS epidemic, it took sit-ins and office takeovers to get the attention of the social services commissioner. This time, we sent a letter and within 48 hours he wanted a phone call.”

Callen-Lorde has its own advocacy history, emerging out of the Stonewall riots to open the nation’s first community-based HIV clinic. “We ran an HIV primary care program that was very sensitive to the stigma people living with HIV were experiencing at the time,” says Callen-Lorde executive director Wendy Stark.

“In this situation, there is so much stigma of being homeless, living in poverty, in shelter — treating people with respect and dignity and valuing every person’s life and experience is a big part of how we provide healthcare at the shelter,” she says.

King echoes this, recalling conversations with residents who resist discharge from the hotel. “I would just go and meet with them and find out what was going on in their life,” he says. With one resident, it was a matter of securing a safe place to stay and a clean pair of clothes and shoes. Housing Works also checked on their public assistance case and food stamp application, then helped them file for the federal stimulus money.

Housing Works has submitted proposals to provide healthcare, mental health and substance disorder services across COVID-19 shelters. They also hope to open a second shelter in partnership with the city.

This work, King says, resonates with Housing Works’ early goal of framing safe, supportive housing as a health intervention to HIV/AIDS. “We try to solve homelessness by adding case management or using the police to coerce folks into case management,” King says. “They need housing. It is healthcare.”

Advocacy from the AIDS epidemic resulted in a number of successes that include major strides in treatment. “The AIDS epidemic has gone into serious recess through our collective efforts, and way more than half our primary care clients are homeless and formerly homeless people who don’t have HIV, they have other comorbidities,” King notes.

He sees another opening in the midst of COVID-19: a chance to dismantle the city’s congregate shelter system.

“I’m doing everything I can to position Housing Works for the possibility that we come to realize mass congregate shelters are the worst possible response to addressing the crisis of homelessness,” he says. “I’m hoping this becomes an opportunity to completely rethink what a system looks like that moves quickly from homelessness to being housed and offers services to stabilize in housing. That’s what we need.”