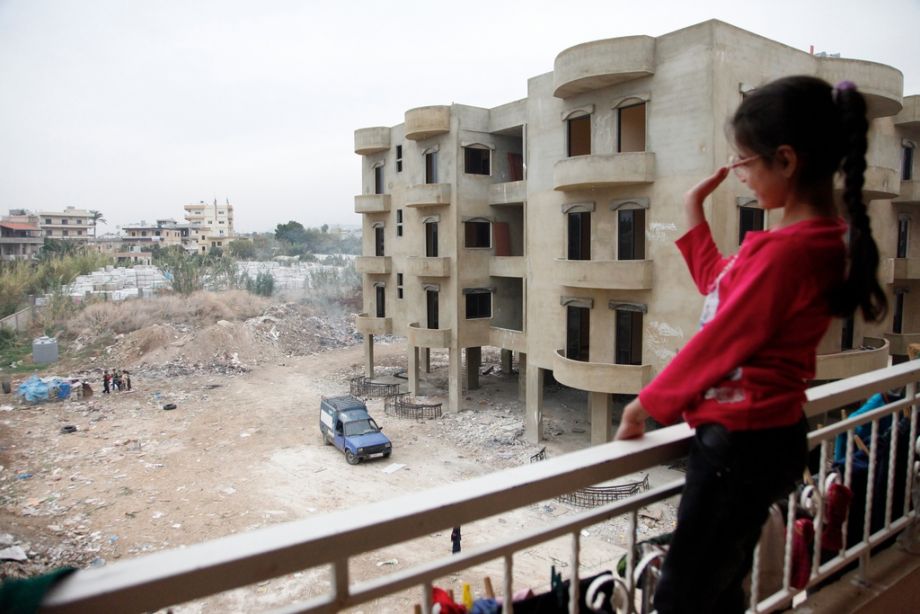 A Syrian refugee in Lebanon, where the ballooning population is creating a jobs and housing crisis. Photo credit: DFID via Flickr

Tariq Jadeedeh is a Sunni Muslim-majority neighborhood known for its militancy. It borders Shia-majority neighborhoods controlled by the militias of Amal and Hezbollah, and is one of the most dangerous sectarian fault lines in the city. When bloodshed comes to the streets of Beirut, it often starts here.

It’s also one of the many neighborhoods being flooded with Syrian refugees.

Twenty-one-year-old Abdul Ghani is one of those refugees. He fled here with his family after their home was destroyed in Aleppo. They now live in the annex of a mosque, paying $200 per month. That’s about as cheap as it gets in Beirut, even in a rough neighborhood like this. Nearby buildings are pockmarked with bullet holes; a Lebanese Army armored personnel carrier sits behind a coil of razor wire a block away. Children play in the hallways, running beneath lines of clothes hung out to dry. The rooms are modest and shared by large families. “It is like a prison,” Abdul Ghani says, the bars of large, lockable metal doors at the end of his floor’s hallway underscoring his point. “I would have preferred to stay in Syria but my parents brought me here by force.”

As the number of Syrian refugees in Lebanon continues to spiral upward, one of the main concerns is where they will live. There are no easy answers, especially in housing-starved Beirut. The Office of the United Nations High Commissioner for Refugees (UNHCR) counts around 20,000 refugees living in the city. But this number only takes into account the rather small municipal boundaries of Beirut proper. When you include the “suburbs” that melt into the city’s fringes – easily the most densely packed areas of the country – you’ll find 72,000 refugees registered as of November, accounting for approximately 8.5 percent of the 850,000 refugees counted by the UN in Lebanon.

But even those numbers are likely too low. The Lebanese government and aid organizations estimate that, in reality, the number of refugees in Lebanon is well north of one million, and growing every day.

“Lebanon is now, as a result of the refugee influx, close to reaching the population it was expected to have by the year 2050,” said Antonio Guterres, the United Nations High Commissioner for Refugees in remarks made in Geneva in December.

The UN anticipates the number of Syrian refugees in the region to grow to 4.1 million by the end of next year, driven out of their homes by that country’s civil war. By that point, Lebanon, a nation of just over four million, could be sheltering more than two million Syrian refugees. But despite the huge influx, Lebanon has been hostile to the idea of formal refugee camps like those in Turkey, Jordan and Iraq.

Competition for housing between Syrian refugees and native Lebanese has created tension between the two communities. Photo credit: DFID via Flickr

The reason for this resistance is embedded deep in the country’s history. Over the past six-and-a-half decades, Lebanon has seen 12 UN-recognized Palestinian refugee camps transform from tented settlements into shantytowns and urban slums. And the country’s Palestinian refugee community – hundreds of thousands strong – played a major role in Lebanon’s 1975-1990 civil war. There is a deep-seated fear that, if provided with formal refugee camps, the Syrians, like the Palestinians, might also become permanent fixtures, unhinging the country’s careful sectarian balance of power.

Without camps, however, the refugees are forced to scratch out their own housing in Lebanon. For many, this means unfinished buildings, crowded shelters and makeshift tents constructed of advertising billboards. While the vast majority of refugees arriving in Lebanon settle in the rural north and eastern Bekaa Valley, the lure of potential employment continues to bring refugees to the capital despite the much higher cost of living.

Those costs continue to rise, thanks to a geography that squeezes the city between the hills and the sea. There is nowhere left to build, no fields for tents to appear in or valleys to sprawl into. The flood of refugees into Lebanon’s poorest communities has also made jobs scarce. Housing, food and transportation are several times more expensive in Lebanon than they are in Syria. Refugees often find that the meager savings they thought they could rely on don’t last them long here. Many quickly rack up debt with their landlords and nearby shops. Competition for jobs with locals and debts compound tensions between refugees and host communities.

Nobody in Lebanon is pretending that they have a solution to the refugee crisis. Amid funding gaps, UNHCR has been forced to move to targeted assistance, giving aid mainly to the refugees it identifies as most vulnerable. But ranking vulnerability in an environment where so many are struggling to make ends meet is difficult, and many refugees feel shorted. Currently, only 500 refugee families in Beirut receive $150 per month in rent assistance from UNHCR, says Roberta Russo, a public information officer with the agency.

One model UNHCR has implemented (though not in Beirut) aims to benefit both refugees and landowners by picking up some of the construction cost for unfinished buildings where refugees are living. One such shelter is in Wadi el Zeini, a half-hour drive south of the city. Tucked behind an oil-stained mechanic’s shop next to the Mediterranean, a dirty stairwell leads up to a building where fourteen families are living. The rooms are bare and living conditions cramped, but sturdy doors and glass windows – rare in the structures the poorest refugees often live in – have been installed, funded by UNHCR.

In such an arrangement, the owner of the building gets work done for free and the refugees receive a bit more privacy and protection from the elements, things they might not have otherwise been able to afford.

But while there are small successes like this to be found, no real solutions to the housing crisis are forthcoming. And for most, return is not an option.

“We will stay until the end of the war,” says Hassan, a refugee at Wadi el Zeini. Where exactly that will be, however, remains uncertain.