Lebanon’s Army, Outmatched by Hezbollah, Seeks to Strengthen Its Hand – Next City

Lebanon’s Army, Outmatched by Hezbollah, Seeks to Strengthen Its Hand 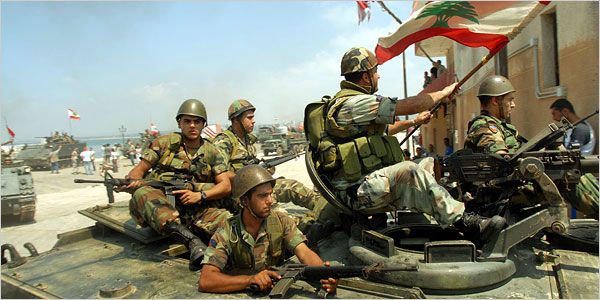 A united, credible national army is seen as an important bulwark against the slide into chaos in Lebanon.

“The security situation,” as it is vaguely referred to in Lebanon, is deteriorating rapidly. The conflict in Syria has long surpassed spillage into its tiny neighbor. Car bombs and assassinations have become near-daily events amid soaring sectarian tensions between rival backers in the Syrian war: the Iranian-backed Shiite movement Hezbollah, and the Sunni-dominated Future Movement, backed by Saudi Arabia.

Al-Qaeda affiliates have now entered the fray, expanding the stage of radical Islamic jihad into Lebanese territory. Branches of Al-Qaeda, the Sunni rebel movement the Nusra Front in Syria and the Abdullah Azzam Brigade have claimed responsibility for an increasing number of car bombings in Beirut’s Hezbollah-dominated southern suburbs of Dahiye, outside the Iranian embassy and elsewhere, allegedly in response to Hezbollah’s intervention in Syria, fighting alongside Syrian president Bashar Assad’s regime.

With security topping the agenda for the new government, a united, credible national army is seen as an important bulwark against the slide into chaos. While poorly resourced and largely impotent in the face of the better equipped Hezbollah and proliferating militias, the Lebanese Armed Forces have remained one of the only symbols of unity and neutrality in a country wracked by internal sectarian divisions and state-within-a-state parallel institutions.

Until the war in Syria, the LAF’s main task, ostensibly, was to act as a deterrent to Israel, and as a civil defense institution. But with no air defense capabilities, no navy, limited ground personnel and aging, unsophisticated weaponry, the deterrent capabilities of the army, especially when compared to its rival Hezbollah, are a source of embarrassment. With the war in Syria dragging Lebanon dangerously close to another civil war, the army’s more pressing task is now to secure the long and porous border with Syria, which has seen frequent cross-border shelling and the transit of arms and men to both sides.

Recognizing the urgency, the United Nations — along with its partners in the International Support Group for Lebanon, the EU, the Arab League and the five permanent members of the U.N. Security Council — has drawn up a five-year development plan for the LAF. The plan, refined over the last nine months, has assessed the army’s needs, its capabilities and its costs.

“It is supposed to underline a permanent, ongoing and firm commitment to shielding Lebanon from the repercussions of the Syrian crisis, while consolidating the Lebanese polity via different means,” wrote Ambassador Nassif Hitti, a senior Arab League official, of the Support Group in Al-Monitor late last year.

One senior Beirut-based U.N. official involved in the drafting of the plan said nine months of consultation with the LAF had yielded positive results. “It’s in everyone’s interests to have a robust army in Lebanon,” the official said, on condition of anonymity. “There has been a push by the army to get more arsenal, not just training. They want improved capabilities along the Syrian border and eventually military air assets.”

“They came up with a wish list and we encouraged them to prioritize capabilities and ensure functioning assets. What’s the point of 12 Apache helicopters if you don’t have anyone trained to fly them?”

“After nine months they had come up with a plan that could actually work and they could sell to the donors. I believe it is as good as it can be.”

The plan was to be a main point of discussion at a meeting of the International Support Group for Lebanon in Paris on March 5 and 6, though it was somewhat overshadowed by the crisis in Ukraine. Another meeting, tentatively scheduled for June in Rome is being more directly billed as a donors meeting to further assist the LAF.

The UK already pledged $15 million for the LAF as part of a “stability” package in July last year to better equip the army to protect Lebanon’s borders. “The army needs the support to match its courage,” Ambassador Tom Fletcher said at the time.

The funding from EU countries is welcome, although it is unlikely to come anywhere close to the $3 billion pledged by Saudi Arabia in December, just ahead of the announcement of the new government. But, according to the same U.N. official, it could go a long way toward neutralizing any perception of politicization of the army by investing stakeholders in striking a fragile sectarian balance.

With Sunni figures installed in key security ministries, including the judiciary, the army has been assertive in promoting early success in combating terrorism in the first weeks operating under the new executive.

Justice minister Ashraf Rifi has got to work replacing Hezbollah checkpoints with LAF checkpoints in Beirut suburbs and on the fractious border territory, and there has been a spate of reports of high-profile arrests of “terror suspects,” along with interceptions of explosives and cars allegedly rigged for bombings.

But not everyone thinks the right balance has been struck, and the biggest obstacle to a credible national army may be homegrown.

Sunni sympathisers with the Syrian revolution complain the army, under the new government, is pandering to their enemies in Hezbollah, as the Shiite movement continues to kill their brethren across the border with impunity.

Highlighting the growing disgruntlement, a series of attacks against the army have seen two officers killed in a suicide attack in the north of the country and protests against the army following arrests of terror suspects.

“They are arresting anyone with a beard,” says Mohammed, a 28-year-old university student, “while they are letting Hezbollah cross the border freely.”

Meanwhile, Ahmad al-Kassas, the spokesman of the Islamic Hizb ut-Tahrir party, speaking in northern Tripoli, said the U.S.-Saudi agreement to form a government in Lebanon amounted to “a mandate to legally arrest anyone supporting the revolution in Syria” and pointed to more division and violence in the country if the Syrian army continued to shell Lebanese territory.

“Especially if the Lebanese Army can’t defend it,” he said.

Retired Army General and Shiite, Beirut-based General Hisham Jaber said claims the army is dominated by Hezbollah are “untrue”. He said 30 percent of the army is Sunni and 30 percent Shiite, and that the far greater proportion of ground troops are Sunni.

“Is the army capable of protecting Lebanese borders against Israel and terrorism? The answer is: We are not sure,” he said from his Beirut office. “The Lebanese army is like every army in the world — it needs arms, personnel, training and morale… We cannot take on any plan to strip the weapons of Hezbollah until we have a strategic plan to build the Lebanese army that will ensure deterrence against any threat… And deterrence needs sophisticated weaponry.”