Learning From Boston and D.C. in an Early Look at Philly Bike-Share – Next City

Learning From Boston and D.C. in an Early Look at Philly Bike-Share 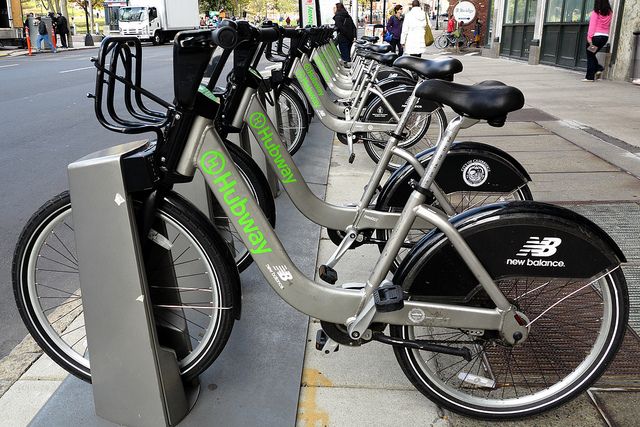 The program would be unfurled in two phases, first covering downtown and its immediate environs, and then stretching into surrounding neighborhoods (with 650 bikes installed by early 2014 and a further 550 by 2015). It is unclear at this juncture whether the requisite funding will actually come through, but hopes are high for the project’s future.

Bike share’s future certainly looks brighter than it did when a city-ordered feasibility study came out in early 2010. The report outlined the possibilities for a system in Philly and compared the outlook with other cities that had already implemented successful bike share programs. It also raised some serious questions about the city’s exposure to liability, bike share’s ability to become operationally self-sustaining after an initial infusion of capital, and whether the city has the infrastructural capacity to support a significant spike in bike ridership. But back then there was no hope for implementation anyway, as the city was busily slashing services and laying off workers.

Three years later, the mayor’s budget proposal contains no service cuts or tax increases, and the city can finally make new investments. The concerns raised in the feasibility study have all been addressed, according to Aaron Ritz, bicycle and pedestrian program planner for the Mayor’s Office of Transportation and Utilities.

Today Philadelphia’s bike infrastructure is much stronger, with new lanes throughout the city and especially downtown, and the bike-friendly Walnut Street bridge having reopened in the fall. In the intervening years, both Washington, D.C. and Boston have implemented bike share programs that are operationally self-sustaining through a combination of user revenues, corporate sponsorship and advertising. In both cities, bike share has proven safe, with no fatalities, and non-profit operating partners indemnifying the municipalities from liability.

“We’ve received a great deal of positive response,” Ritz says. “Opposition has been a very small portion of what we’ve talked about, most concerns about individual issues rather than opposition wholesale to the idea.”

The system will first appear downtown, and will then spread throughout Center City and into the neighborhoods to the north and west (where the big universities are located). But the staging isn’t concrete and no station locations are set at this point. The complete system would have between 100 and 200 stations, with between 1,000 and 1,200 bicycles. The goal, Ritz says, is to launch “at start of the academic school year 2014.” He also anticipates that he will need to go to city council to request approval for a long-term vendor contract. The city plans to elaborate further on its plans at an April 30 forum, held at Drexel University’s Academy of Natural Sciences in Center City.

Philadelphia’s consolation for being slow to the bike share game is that it can learn from the experiences of other cities that have already implemented programs. Washington, D.C.’s Capital Bikeshare, opened in September 2010, has proven remarkably successful. It is set to reach 4 million rides this month and last week averaged 9,000 a day, including their highest single ridership total yet: 9,857 last Tuesday.

Like most similar programs, Capital Bikeshare is open to members, who pay an annual $75 fee, or “casual riders” who pay as they go; D.C.’s program has 22,000 annual members and 270,000 users since it launched. In the winter and fall, about 80-85 percent of rides are by annual members, while in the summer and spring the split is closer to 50-50. The system has 202 stations and 1,700 bikes in the city and suburbs of Northern Virginia, and is expected is to start expanding into Maryland suburbs to the northwest this summer (with more tentative plans for the northeast).

“One lesson learned is to go as big as you can in the beginning as opposed to a smaller pilot study,” says Chris Holben, bike share project manager for the District Department of Transportation. “Try to do as much as you can in the beginning, because the way the system works, the more stations there are, the more synergy there is among users in different neighborhoods and that makes the system stronger.”

In short, more stations allow users to ride and deposit their bikes across the city, allowing bike share to function as a useful component to the mass transit system, thereby augmenting Metro (or in Philly’s case, SEPTA) and allowing coverage of poorly served areas.

Boston’s Hubway system is smaller, with a little more than 100 stations and more than 1,000 bikes covering the city, Brookline, Somerville and Cambridge. The system has had between 700,000 and 750,000 rides, with about 40 percent causal riders and 60 percent members.

“In a city like Philadelphia it could be wildly successful, as it is in Boston,” says Nicole Freedman, director of Boston Bikes program. “One thing we’ve done well is making sure we have stations in low-income neighborhoods, making sure we have subsidized memberships available, and we’ve been very successful at making sure bike share is for every Boston resident regardless of income, ethnicity, language, etc.”

In addition to building stations in lower-income neighborhoods, Hubway offers $5 annual memberships to low-income people. Residents are eligible who receive any form of public assistance — from food stamps to the Earned Income Tax Credit — or have an income that is 400 percent of the poverty level. The program has a staff member who spends nearly all her time selling the subsidized memberships, explaining how Hubway works to low-income residents and signing people up who do have access to a computer.

Such a plan would be essential for a program in Philadelphia, where over one-fourth of the city’s residents live below the poverty line and many more live in near-poverty. The “core market area” that the feasibility plan lays out, which would presumably be covered in the first phase, consists of the city’s wealthier downtown areas (and the major universities). But the second expansion phase would cover mixed and lower-income neighborhoods, including larger swaths of West Philadelphia, Fishtown, much of Kensington, “and nearly all South Philadelphia river to river.”

No mention of the predominantly low-income Brewerytown or Strawberry Mansion neighborhoods, both of which are poorly served by SEPTA’s rail systems and desperately need more transit options, although they are also both uphill from the downtown jobs center.

It’s not yet clear what the annual price of a bike share membership in Philly would be, but it would inevitably cost less than taking SEPTA or driving. Compare D.C.’s $75 membership to $83 for a SEPTA Monthly Transpass (soon to be $92). Putting the stations in the neighborhoods, and including a subsidized membership program, would be a significant boon for the city’s low-income population. And the city seems to be well aware of the system’s potential in this regard.

“That’s one of the requests we’ve made of our consultants in the business plan is to see how we can make this a viable transportation option for everyone who lives in Philadelphia,” Ritz says. “A lot of Philadelphians would really benefit from it, but might not have a credit card or the ability to get one. So we’re going to be investigating options of how we can both bring people into using the bike sharing system and make it an easy option for people of all income brackets.”

The lessons from Boston and D.C. seem to be: Make the system expansive and accessible to residents across class lines. A bike share program in Philadelphia wouldn’t simply be a nice little perk for tourists, or some urbanist frill. It could be an important and affordable augmentation to the city’s existing mass transit system, easing congestion on roads and crowding on SEPTA vehicles.