Lawmakers Debate How Ambitious to Get With Washington Bridge – Next City

Lawmakers Debate How Ambitious to Get With Washington Bridge 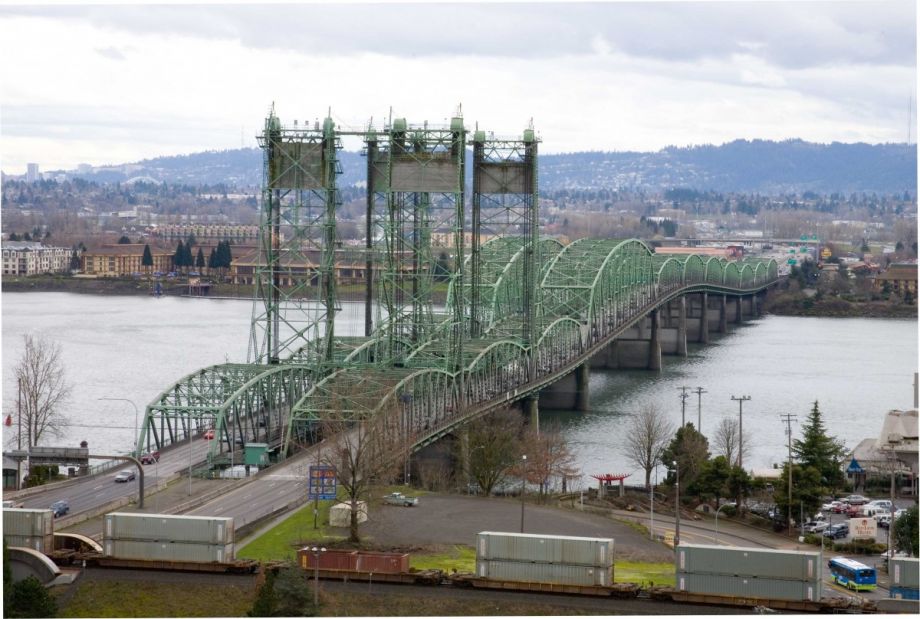 The Interstate Bridge, viewed from Vancouver, Washington (Photo by Cacophony)

Seven Southwest Washington state legislators have introduced bills in the House and Senate that would declare replacing the 100-year-old Interstate Bridge, a low-level lift span that carries Interstate 5 over the river, as a “project of statewide significance.” The designation could expedite the permitting process for the replacement bridge.

Meanwhile, two Vancouver-area Republican state representatives have lined up behind an alternative bill that would create a bipartisan bistate bridge project legislative work group. This group would not limit its purpose to replacing the I-5 bridge but would also consider other possible corridors for a new Columbia crossing. At a town hall meeting sponsored by the two representatives, Liz Pike and Vicki Kraft, four possible alignments were mentioned, including a bridge on the east side of Multnomah and Clark counties, a tunnel beneath the I-5 corridor, a flyover bridge near the existing span, and a new western bypass proposed by a Clark County business owner who, when pressed by a town hall attendee, admitted its cost would run in the billions.

Some local residents remain adamantly opposed to any bridge that would include provision for light rail, the article notes. A pamphlet in support of the legislative work group bill stated that “Oregon is not as motivated as SW Washington to deal with cross river solutions” and “nothing will happen until Washington and Oregon come eyeball to eyeball in a formal process.”

OKC Streetcar Project Breaks Ground
Officials in Oklahoma City formally broke ground Feb. 7 on the MAPS 3 modern streetcar project, to be known as the OKC Streetcar when it goes into service.

Metro Report International reports that the $131 million streetcar line will consist mainly of a 4.7-mile figure-eight loop connecting the city’s Midtown and Bricktown districts. A shorter, 2-mile loop through Bricktown overlaps with the southern end of the main line. The two routes will have a combined total of 22 stops.

A joint venture of Herzog and Stacy and Witbeck is building the line, with ADG, Jacobs Engineering, Aecom and SOJ providing consulting services. Brookville Equipment Corporation is building the five low-floor streetcars that will work the line; the cars will be equipped with batteries for operation on wire-free segments.

“The MAPS 3 OKC Streetcar is one of the most ambitious projects in Oklahoma City’s history, and it will forever transform the way we live, shop, work, play, eat and get around downtown and the surrounding districts,” said Oklahoma City Mayor Mick Cornett at the groundbreaking.

Seattle Business Owners Get Cold Feet on Streetcar Extension
Business owners along Broadway, the main street through Seattle’s Capitol Hill neighborhood, are now expressing doubts about the wisdom of extending the city’s First Hill Streetcar up that street, the Capitol Hill Times reports.

Back in 2009, when the streetcar was being planned as a substitute for a canceled Link light-rail station in First Hill, the Capitol Hill Chamber of Commerce and the Capitol Hill Community Council jointly lobbied for a Broadway extension of the line. Now, after a change in its leadership, the chamber isn’t so sure the extension is a good idea.

Sierra Hansen, the chamber’s executive director, said that cost, congestion and changes in the Link route all made the extension’s value questionable now.

A local improvement district, which would fail to be created only if 60 percent of property owners in the district object, would have business owners paying up to $1 million over 20 years, Hansen said, in exchange for nowhere near that level of increased business from streetcar patrons.

In addition, she argued that adding streetcars would increase parking woes and worsen congestion on Broadway and noted that the addition of a Capitol Hill station on Link provides fast access to downtown.

Should the extension be canceled, funding from the Puget Sound Regional Council would be redirected to other projects.