Jobs for Homeless Program Gets Applause, So What’s Next? – Next City

Jobs for Homeless Program Gets Applause, So What’s Next? 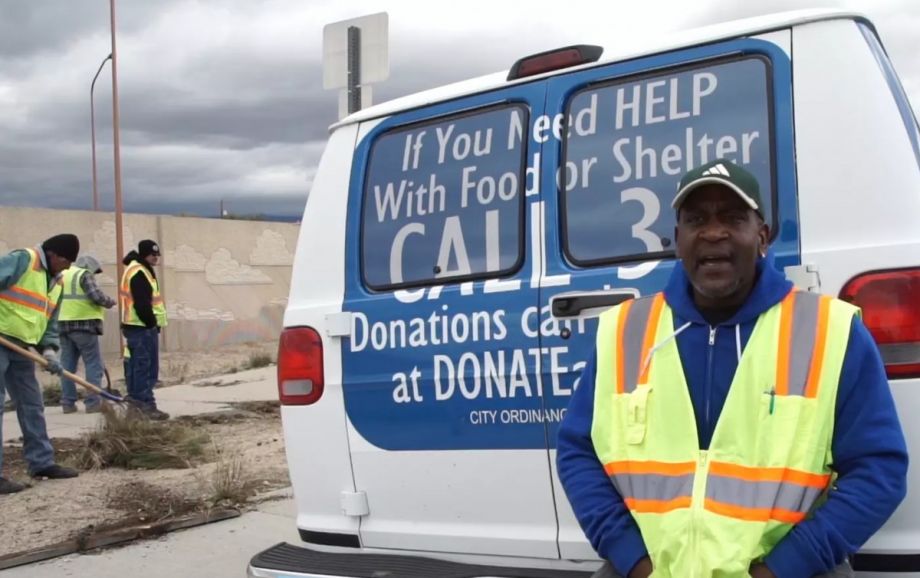 In 2015, Albuquerque Mayor Richard Berry made national headlines when he debuted a no-frills effort to reduce panhandling and homelessness in the city. With one driver and one 10-seater van, the program, called There’s a Better Way, would transport the city’s jobless to six-hour gigs pulling weeds in parks, picking up trash or tidying up the grounds at the local dump.

What started off as a $50,000, six-month pilot is now an $181,000 annual program that has inspired spin-offs in Denver, Dallas and the state of Wisconsin. Anaheim, California, became the most recent municipality to get on the trend, with Mayor Tom Tait telling an audience of 800 at the State of the City address on Feb. 7 that jobs were the solution to homelessness.

Experts on equitable economies, however, say it’s not that simple. There’s a Better Way is catching the interest of U.S. politicians on both sides of the aisle because it’s low cost and easy to deploy, but researchers say it’s a short-term fix with short-term results if municipalities don’t link it with a robust system of local services like long-term career training and housing assistance.

“My impression is close to half of persons who are homeless have employment, regardless whether their city offers this type of program,” says Sandy Darity, a professor of public policy at Duke University. “They just have poorly paid employment.”

Even if an individual were to work these jobs full-time, Darity notes that it’s still not enough pay to bring someone out of the cycle of homelessness — regardless of any short-term cash injection. Earning $9 an hour at 40 hours a week comes out to about $17,000 a year. “That’s below the poverty line,” he notes.

But there is a silver lining to the uptick in interest in this program: With more municipalities putting their weight behind it, it could attract federal dollars and open up similar no-paperwork programs leading homeless or unemployed communities into other industries.

If you’re unemployed with barriers to employment, like a prison record or mental health issues, There’s a Better Way maintains your anonymity. There’s no form to fill out, no ID required, no background checks — living on the streets is enough to qualify. (Kellie Tillerson, the employment director of St. Martin’s Hospitality Center, which oversees the program in Albuquerque, says when approached for work “most people say yes, and those that say no are typically physically unable to do the work.”)

There’s enough demand in construction, hospice care and other public job needs across the U.S. to bring this approach to more cities and more, potentially better-paying projects.

“What we’d want to do is take an inventory at the municipal level and identify what the most pressing local needs are,” Darity says. “Then structure a jobs program so we could match those needs with the skills, interests and talents of folks who seek public sector employment.”

In its current form, the impact There’s a Better Way yields isn’t going to change neighborhoods over night, but it could very well lay the seed for homeless or jobless individuals to want to seek out more gainful employment. Lack of education, no access to transportation, an empty CV and mental health issues are just some of the reasons homeless populations are reluctant to seek out work. So work that goes straight to a homeless person is also bound to bring unprecedented personal benefits.

“There’s a lot of research that links unemployment with virtually every socioeconomic problem you can think of,” says Pavlina Tcherneva, an economics professor at Bard College. She notes that the program’s quick employment opens the door for “these positive multiplier effects on homelessness, mental health issues, school retention, on crime” in the cities in question.

Tcherneva says even six hours of work is enough to get residents interested in maintaining their community long-term.

“If you put people just to sweep the streets, it already confers so many benefits. Imagine if you put them to do some basic conservation stuff,” she says, referencing the vast natural landscapes where she lives in Upstate New York, and the need for everything from river maintenance to forest conservation projects. “Then it’s not just sweeping the streets, but you kind of start building a skill set, but you’re filling these gaps in the public service sector.”

Since September 2015, the program has given 1,689 day jobs to 488 Albuquerque residents, putting about $90,000 total into the pockets of people living far below the poverty line. It’s now trying to forge partnerships with the local private sector to create similarly lean jobs programs in other industries — a long-term approach that future cities should note when trying to bring the model into their own long-term homelessness goals.