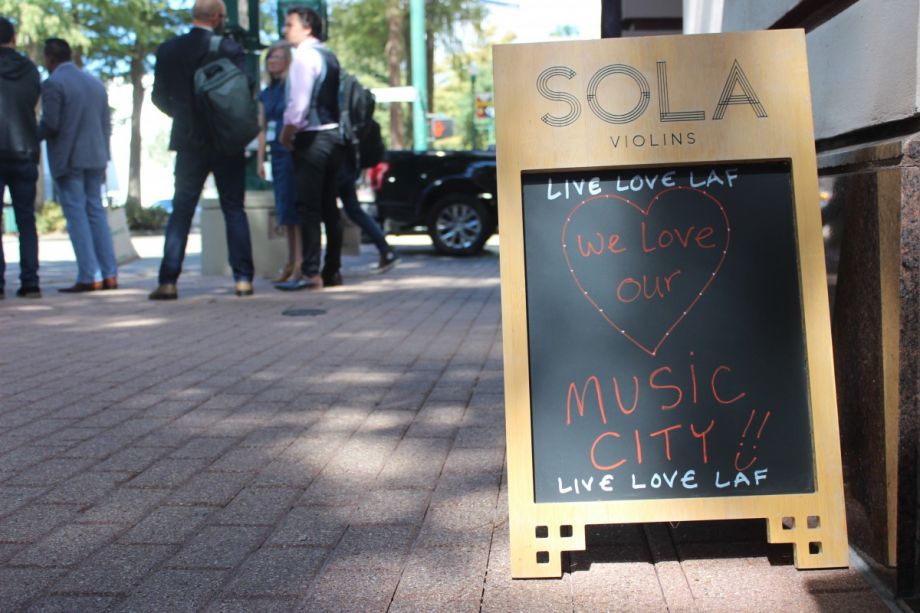 On a recent Thursday night, music fans packed a converted 75-year-old warehouse in Lafayette, Louisiana to hear age-old French songs made new again at a rollicking “fais do-do,” or Cajun dance party. Jourdan Thibodeaux and his band Les Rodailleur stomped their way through a number with fiddles and accordions ablaze as couples danced in time. Veteran singer Zachary Richard, beloved throughout the francophone world, regaled the crowd with the tale of a shady lawyer and an orange tree. Chanteuse Anna Laura Edmiston held the audience at rapt attention with her rendition of a medieval ballad.

This all-star cast of Acadian musicians, who keep the flame alive for Louisiana French, was also noteworthy for the evening’s source material: a treasure trove of lost recordings by Caesar Vincent, a humble farmer who roamed rural Louisiana his entire life by horse or on foot — he never owned a car, or for that matter a television — and had an encyclopedic memory of folk songs spanning old-world France to new-world Acadiana, the French-speaking cultural region of Louisiana also known as Cajun country.

Musicologist Barry Jean Ancelet uncovered the clutch of archival material at the University of Louisiana at Lafayette and invited contemporary musicians to arrange and record new versions. The resulting album premiered live earlier this month at the fais do-do, which kicked off this year’s edition of the long-running Festival Acadiens et Créoles, a three-day festival dedicated to the music, food, and crafts of southern Louisiana.

In a welcome twist for Lafayette’s musicians, the local government picked up half the cost of the project under a new funding stream called CREATE, a $500,000-per-year voter-approved pot of money to support innovative projects that will boost the local cultural economy.

For Ancelet, who also directs the festival, the infusion of cash to support new artistic endeavors sounds as good as the zydeco rhythms that thumped through Lafayette all weekend. “It will matter immensely and immediately,” he says backstage at Warehouse 535 during the Caesar Vincent concert.

That catalyzing impact from local dollars is precisely what Joel Robideaux, mayor-president of Lafayette’s combined city-parish government, hopes to accomplish with the fund, which sets aside roughly five percent of a pot of rededicated property-tax surplus funds to the creative cause. Voters approved the idea last year after Robideaux introduced it during his annual parish-wide address.

The CREATE cultural fund is a first step to having a cultural impact on a local economy where larger macroeconomic forces hold sway.

“When I announced that I was running for office the price of oil was over $100 a barrel and when I got sworn in 15 months later, it was $28 a barrel,” Robideaux says on the sidelines of the Music Cities Convention, which brought dozens of music industry and city policy experts to Lafayette earlier this month during the Festival Acadiens.

“The up-and-down oil and gas industry is not something we can control,” he says. “[But] a lot of our identity is tied to our music, food, and culture, so if there were some tax dollars out there that can be spent better to help diversify our economy, then that makes sense.”

Jonathan Williams, a Lafayette businessman who hosts a monthly fundraising jam session for aging and retired musicians, believes that local leaders saw the handwriting on the wall with the volatility in oil and gas for a regional economy that serves offshore Gulf of Mexico petroleum.

“We’re an oil town,” says Williams. “The fact that the oil industry did drop, it forced the powers that be to the position of having to diversify. Whenever you have government focusing on the development of our creative economy, that’s exciting.”

Williams, who donates roughly $80,000 per year of his own money to his cause, sees CREATE’s half-million as a good start.

“$500,000 is maybe going to scratch the surface,” Williams says, provided that the fund helps leverage other philanthropic dollars.

That approach is precisely how Robideaux, also a certified public accountant, views CREATE, which will go back to the voters for renewal in 2025. “It’s not a stopgap handout for when you’re short on money for an event this year,” Robideaux says. Rather, CREATE exists to provide the matching funds so often required to apply for grants, which local arts groups could not go after without a reliable backer.

Mark Falgout, who owns Warehouse 535 and popular honky-tonk The Blue Moon Saloon, was one of CREATE’s initial beneficiaries when he used the city fund to host the first stateside edition of the Buddy Holly Educational Foundation’s songwriter workshop, which this past May became the South Louisiana Songwriters Festival, or SOLO. Some of that festival’s participants performed at the Caesar Vincent concert.

CREATE’s dollars were a welcome change for the music promoter after past experiences with the Lafayette Economic Development Authority, where requests for funding to help promote the Lafayette sound at events like Austin’s South by Southwest and music expos in Nashville were rebuffed as more of a tourism concern.

“As a community, the business leaders are starting to gather the idea that the cultural side is an important economic driver,” he says on the steps of Warehouse 535 as patrons thank him on their way out the door.

For Falgout, the first-ever local songwriting festival was not only a solid business proposition that drove customers to his venues, but also an opportunity to keep Cajun music fresh.

“If I’m going to be in the music business, it all starts with a song and that craft is being lost here,” he says. “We’re teaching [local musicians] so that once again Lafayette becomes a hub of creative, new, relevant material as opposed to just the historical context of Cajun zydeco.”

That legacy nevertheless is a large part of what motivated Robideaux to launch CREATE. Last year, the mayor attended a soul concert at the Acadiana Center for the Arts auditorium where the center’s director acknowledged several Grammy nominees in the audience. Across the hall, an unrelated event was handing out a lifetime achievement award to Louisiana accordionist Preston Frank, where yet another group of prominent musicians assembled. There were more local Grammy nominees and winners under one roof than he could count on both hands.

“All that on a weeknight in January?” Robideaux says. “It reinforced that we have something special here.”

EDITOR’S NOTE: We’ve clarified the language in this article referring to the source of the funds for CREATE.

Tags: arts and culture, new orleans, for whom by whom