L.A. Subway Begins to Inch Even Closer to the Sea – Next City

L.A. Subway Begins to Inch Even Closer to the Sea 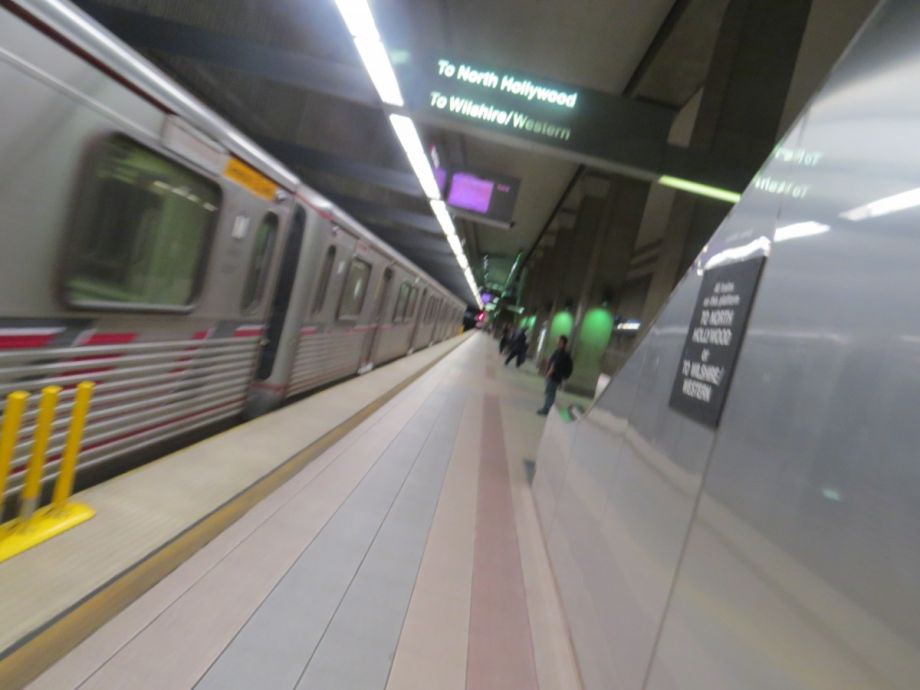 The purple line in Los Angeles is slowly extending out toward the sea, starting from downtown L.A. (Photo by Andy Nystrom)

Whether “The Subway to the Sea” ever reaches the Pacific remains an open question, but Railway Track and Structures reports that the Los Angeles County Metropolitan Transportation Authority (LACMTA) has gotten a go-ahead from the Federal Transit Administration to begin preliminary work on the third section of the Purple Line subway extension to Westwood.

The federal clearance for preliminary work to begin has two important benefits for the LACMTA. One is that it increases the likelihood that it will receive a federal grant to help pay for the section. The agency seeks a grant to cover $1.3 billion of the extension’s total cost. The Federal Transit Administration had previously approved grants for the extension’s first two sections, which are now under construction. The LACMTA anticipates federal approval of the third grant in early 2019.

The second benefit is that it will allow the LACMTA to take advantage of tunnel contract bids that came in about $130 million lower than expected. The bids were set to expire on Oct. 3, which would have required the contract to be re-bid. Avoiding this will save the agency an additional $200 million in project escalation costs and two years’ worth of delays.

When complete, the Purple Line extension will take the route from its current terminus at Wilshire Boulevard and Western Avenue in Koreatown to Westwood and the UCLA campus. Work on the first section, from Wilshire and Western to Beverly Hills, began in 2015, and work on the Beverly Hills-to-Century City second section began in 2017. The extension is on track to open for service in 2026, in time to provide service during the 2028 Olympic and Paralympic games.

Will they go ‘round in circles? Of course they will. Will they fly high like a bird up in the sky? No, they’ll travel under the streets of Scotland’s second-largest city.

“They” are the new driverless subway trains that will run on Glasgow’s 10.5-km (6.5-mile), 15-station circular underground line. Railway Gazette International reports that the trains’ manufacturer, Stadler, presented the first of 17 four-car trainsets to officials of the subway’s operator, Strathclyde Partnership for Transport (SPT), at InnoTrans 2018 in Berlin on Sept. 20.

Stadler Project Manager Stefan Rosendahl told Railway Gazette that the first trainset to arrive in Glasgow will get there by year’s end. The trains should enter service in October 2020.

The consortium of Stadler and Ansaldo won the £200 million (US$262.81 million) contract to supply the cars and signal system in 2016. The contract accounts for the lion’s share of the £288 million (US$378.44 million) SPT is spending to modernize the 122-year-old subway.

Metro Report International reports that the first metro line in Hanoi began making test runs with riders on board on Sept. 20.

Hanoi’s 13.1-kilometer (8.1-mile), all-elevated metro line is being run with a fleet of 13 trains manufactured by CRRC. The trains have a top operating speed of 65 km/h (40.4 mph). Test trains are running at 10- to 12-minute headways, which are expected to drop to 5 minutes when testing ends in three to six months.