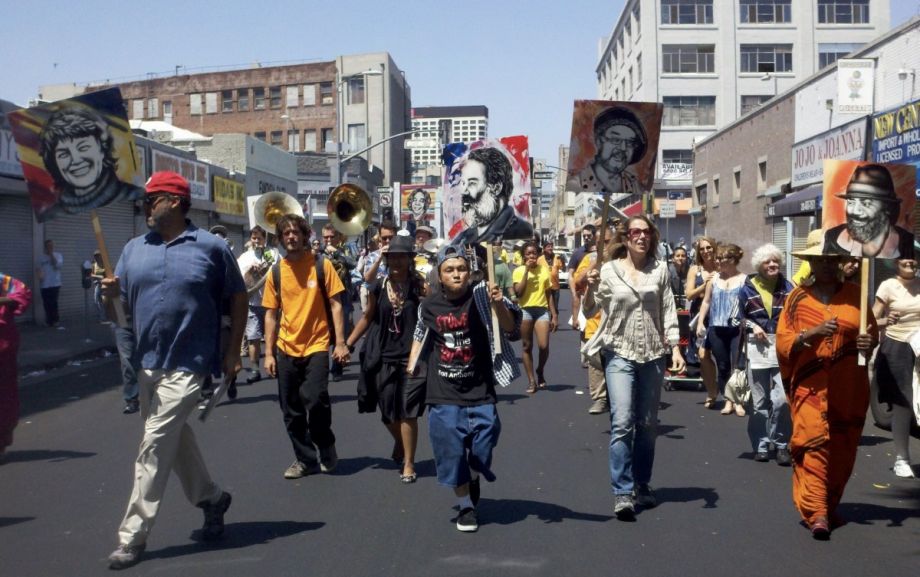 Advocates for the very poor living on Los Angeles’s Skid Row said Friday they fear that a city plan to support growth in downtown L.A. will threaten thousands of people who call the area home, the LA Times reports.

Los Angeles has been updating two community plans to devise and implement a growth strategy for the city’s rapidly changing downtown. Collectively called DTLA 2040, the plans project that 125,000 people will move to the area by the year 2040; the area aims to add some 70,000 units of housing to accommodate that growth.

The Skid Row portion of the draft plan, the Times says, would rezone industrial property along three streets running east-west to allow market-rate housing, while building permanent supportive housing and space for social services on the north-south streets.

A coalition of Skid Row groups, at a press conference Friday, said that the rezoning would “open the floodgates to high-end luxury housing,” driving up rents and leading to the eviction of 4,800 people living in low-cost housing like single-room occupancies, reports the Times, and that the plans also “disregard the fate” of the 2,100 people who live on the neighborhood streets.

Calling themselves Skid Row Now and 2040, the coalition released a report asking that the city enact a mandatory inclusionary zoning policy in the neighborhood, set a no-net-loss policy to ensure that units are replaced with similarly priced options, and set fees on developers to subsidize rents for Skid Row residents, with the goal of adding 7,000 units of housing for very-low-income residents. The group also wants a vacancy tax to discourage speculation.

“We need to get everybody off the street and that should happen before building buildings that will overwhelm [Skid Row] with the voice of money and power…making people uncomfortable in their own neighborhood,” John Malpede, founding artistic director of the Los Angeles Poverty Department theater group, part of Skid Row Now and 2040, said at the press conference, according to the Times.

“Skid Row remains a rare pocket of affordability that may no longer exist if high-end housing sweeps across the neighborhood,” the groups wrote in the report, adding that DTLA 2040’s plan does not account for “what will happen to the thousands of homeless people once Skid Row is redeveloped…the city fails to distinguish between land use policies that might address this humanitarian crisis zone and the very different planning needs of affluent commercial districts surrounding it.”

The department of city planning told ABC7 that the plan is still in the concept phase and that the needs of Skid Row residents will be considered.

“It is focused on trying to preserve the existing network of affordable housing, social services and making sure that can continue to exist and grow,” senior city planner Patricia Diefenderfer said.

City Councilman Jose Huizar, who represents downtown L.A., told the LA Times that he welcomed the ideas from Skid Row Now and 2040 and supported creating 7,000 units of housing.

“For too long we allowed a policy of containment that has created the largest concentration of homelessness in the nation,” Huizar said in a statement provided to the Times. “We must envision a more mixed-income environment for all our neighborhoods, and that also means incorporating more affordable housing into the rest of downtown, too.”

Skid Row advocates say building more housing is a start, but not enough.

Inner City Law Center director Jerry Jones, who authored the Skid Row Now and 2040 report, told the LA Times that without the other policy changes and safeguards against housing displacement, “we will stop this plan dead in its tracks.”