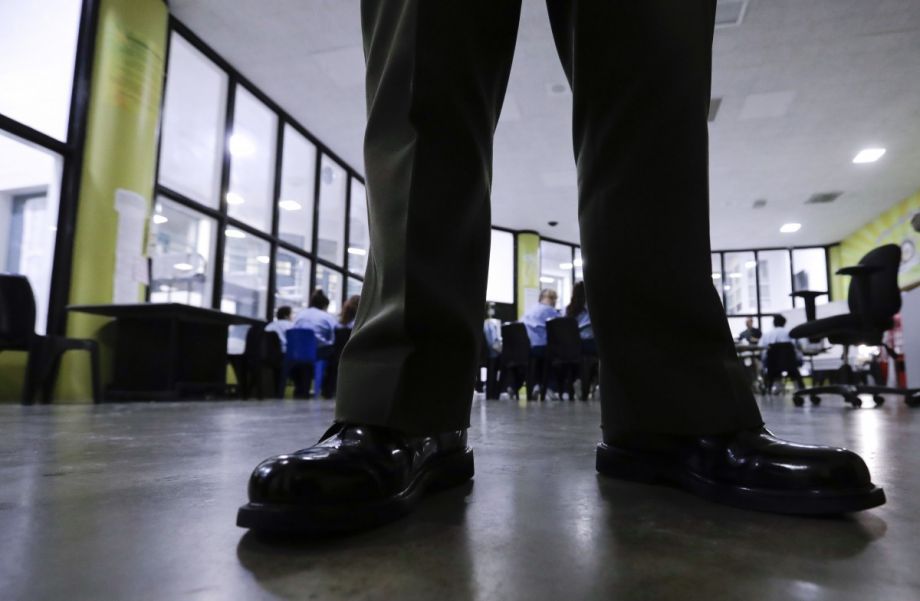 A Sheriff officer stands guard over inmates during a program at the Twin Towers Correctional Facility Thursday, April 27, 2017, in Los Angeles. One of the world's largest jail complexes is located in Los Angeles and within it resides perhaps the world's largest group of inmates whose mental illness is attributed to drug abuse, mainly from highly addictive methamphetamine. (AP Photo/Chris Carlson)

Los Angeles County supervisors have approved a plan to tear down a “dungeon-like” jail downtown and build at least one mental health treatment facility, the L.A. Times reports.

It’s a shift from the original plan which would have replaced the old jail with a 3,885-bed “Consolidated Correctional Treatment Facility,” a rehabilitation-focused jail.

Supervisors Hilda Solis and Sheila Kuehl opposed the plan, saying the plan could still result in the construction of a massive building.

Kuehl added to the Times that if the new mental health facility contained anywhere close to the number of beds proposed for the CCTF, it would house more people than every county hospital combined.

Kuehl and Solis had proposed an alternate arrangement, one which would tear down the old jail but direct county staff to find funding to move people out of jail and into treatment. That motion did not carry.

The mental health facility will be staffed by the Department of Mental Health, with a “limited” number of sheriff’s deputies to provide security.

“Sheriff’s deputies will never receive enough training to become mental health professionals, nor should they,” said Supervisor Janice Hahn, according to the Times.

Community activists have opposed the building of more jails, but not all the activists were thrilled with the new vote. More than a hundred activists packed the supervisors’ meeting to argue that the mental-health facility would become a “dressed-up jail.” They asked the county to instead commit to five smaller mental health centers spread throughout the county, Curbed LA said.

Eunisses Hernandez of JustLeadershipUSA, an organization dedicated to reducing the jail population, said the supervisors borrowed the activists’ talking points in advocating for decentralized treatment facilities but approved a contract that might force the county to build a large jail-like facility.

“In the end they have just approved a contract to create a mental health jail, a jail with a bow on it,” Hernandez said. Still, she said it was a partial victory that years of activism have pushed officials to seek alternatives to incarceration.

Supervisor Mark Ridley-Thomas said the new plan doesn’t mandate a certain number of beds. It just gives the $2.2 billion contract to the same contractor that was going to build the jail and instructs them to build a mental health center instead.

Regardless of the disagreements over what should go on the site, most agree that the existing Men’s Central Jail must be torn down. LAist reports that the design is unsafe for deputies, the facility’s plumbing often doesn’t work, and “vermin infestations are not uncommon.” Ridley-Thomas told the Times that the “more urgent goal” is getting rid of the Men’s Central Jail. What comes next is still an open question.