What the L.A. Rams Deal Says About Cities Building Stadiums – Next City

What the L.A. Rams Deal Says About Cities Building Stadiums 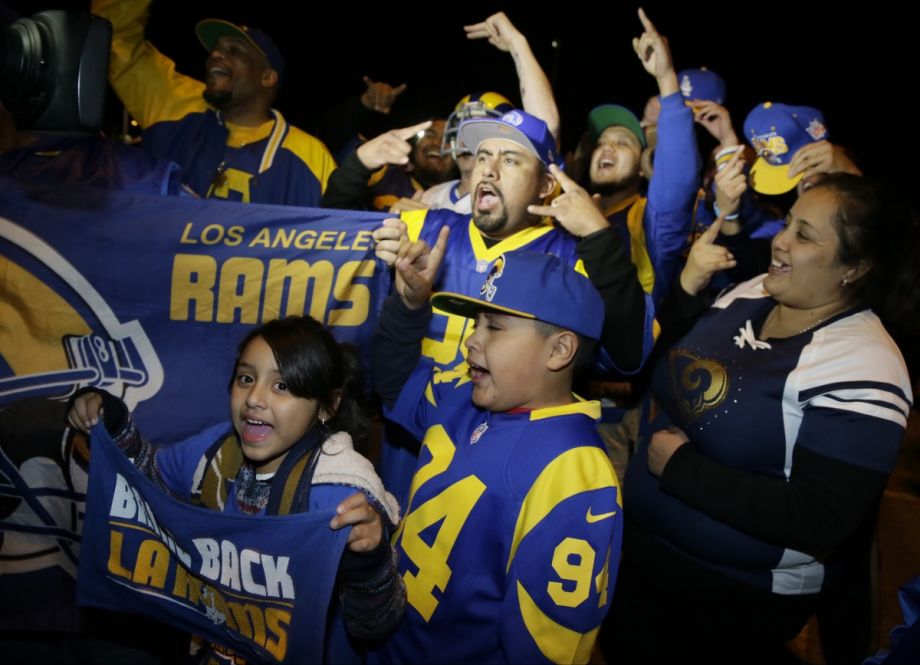 Football fans cheer the return of the Rams to Los Angeles on Tuesday. (AP Photo/Damian Dovarganes)

After 21 years in St. Louis, the Rams are heading back to Los Angeles for the 2016 season, and the San Diego Chargers may join them.

Owner Stan Kroenke is developing a nearly $3 billion facility for the team in Inglewood, California, the Los Angeles Times reported. When the stadium is completed in 2019, it will be only the second NFL stadium built in the last 20 years solely through private funding. (The other is the MetLife Stadium in New Jersey.) Until then, the team will play at the L.A. Memorial Coliseum.

While many L.A. football fans and city officials are celebrating the news, the economics of hosting a sports team are complicated.

As Next City reported last year, studies have repeatedly shown that sports teams don’t have the far-reaching economic impacts that one might assume, and experts have noted that stadiums aren’t as catalytic as some franchise owners might tout. “Professional sports has a small positive effect on earnings per employee in the Amusements and Recreation sector, but … this positive effect is offset by a decrease in both earnings and employment in other sectors of the economy,” wrote Brad Humphreys and Dennis Coates in their 2002 study on the economic influence of the big leagues in American cities.

Yet, despite the lack of evidence that new stadiums have economic benefits, many mayors and governors continue to look to taxpayer dollars as a source for funding construction of them — particularly when trying to entice teams to stay put. According to results of one analysis published in 2015, since 1997, 20 new NFL stadiums have had the help of $4.7 billion in taxpayer money. Will St. Louis serve as a warning to officials going forward? After all, a proposed $1.1 billion venue on the city’s riverfront that would have tapped public funding in an effort to keep the Rams failed to sway Kroenke. Furthermore, even with the Rams gone, the city of St. Louis will still be forking over $6 million a year to pay off the stadium where the team has played for the last 20 years. St. Louis Mayor Francis Slay declared himself done with the NFL at a press conference yesterday, according to St. Louis’ CBS station, and says he’ll be turning to other projects.

Slay said he is going to increase his focus, and seek a regional focus, on the hospitality industry, citing conventions, tourism and amateur sports, including NCAA events.

“We are going to look at how we as a region can invest in ourselves by improving the convention center and the Scottrade Center,” he said.

He also still hopes to assemble the land on the site of the proposed stadium, to connect the Arch grounds to the Stan Musial/Veterans Memorial Bridge, calling it “a real opportunity.”

Post-recession, there’s some evidence that the municipal appetite for subsidizing stadiums is waning. According to a Reuters report this week:

Since 2008 … public money funding has on average paid for 27 percent of the cost of new stadiums in all professional sports, according to a study by Victor Matheson, an economics professor at College of the Holy Cross in Massachusetts.

That’s a stark reversal from an average of 74 percent over the previous two decades, although the cost of the facilities has risen dramatically.

The recession changed the politics of stadium subsidies, at least in the short term, Matheson said.

Is San Diego listening? Knowing that the NFL’s Chargers have a one-year option to decide if they want to relocate and join the Rams in Inglewood, San Diego will vote in June on whether or not to invest $350 million in public funding toward a new facility to replace Qualcomm Stadium to persuade the Chargers to stay.

UPDATE: According to the Los Angeles Times, those who touted a totally private Inglewood, California, stadium deserve an asterisk. The Times reports that the development plan for the sports complex build “includes two paragraphs of how Inglewood would eventually reimburse the project for the costs of roadwork, utility work and public parks on the nearly 300-acre site … [estimated at $60 million]. The city would also reimburse costs of security, medical services and shuttles to off-site parking during stadium events … at about $8 million a year.”