$50M Bridge Could Be Just What L.A. Mountain Lions Need – Next City

$50M Bridge Could Be Just What L.A. Mountain Lions Need 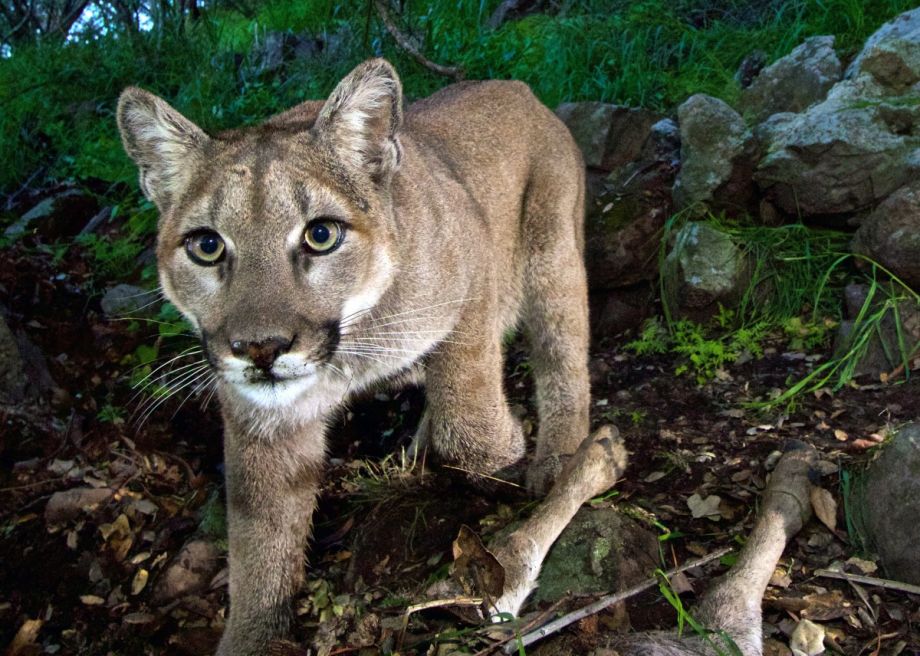 One of several mountain lions observed in and near urbanized areas in greater Los Angeles in 2015 (National Park Service via AP, File)

In the Santa Monica Mountains, America’s largest cat lives alongside the hustle and bustle of its second-largest city. A group of 15 mountain lions reside in the mountains just 50 miles from downtown Los Angeles. They’re the only alpha predators in North America that call a megacity home, but in living in this unlikeliest of places, they’re doomed to isolation and may quickly be headed for extinction. The population, according to recent research, could be wiped out in just half a century.

The lions live on what is essentially an island, 150,000 acres of shrub land and forest bound by the Pacific Ocean, Interstates 405 and 101, and the sprawl of L.A. and Oxnard. A decade of research on the cats, many of which are collared with tracking devices, have shown that the freeways are nearly impenetrable barriers to movement. Only one cat that scientists know of has successfully crossed the roads, and more than a dozen have died trying.

When a population of animals is small and isolated like this, nature’s random events take a heavier toll than they do on larger groups that can move freely. With just over a dozen lions — and only two breeding age males — in the Santa Monica Mountains (SMM) group, a disease outbreak, a fire or even just a bad breeding year could be devastating, or even fatal. Barring these catastrophes, the freeways still hurt the SMM mountain lions by preventing them from leaving to find mates in other populations and keeping new lions from coming into the mountains, leading to inbreeding. Over time, inbreeding can lead to birth defects, reproductive problems and higher susceptibility to disease, and compromise the lions’ ability to reproduce and survive, a phenomenon called “inbreeding depression.”

When these environmental, demographic and genetic factors are all at work on a small, isolated population, they reinforce each other and create what ecologists call an “extinction vortex” that drives the population’s size down and elevates its risk of extinction.

Ecologist Seth Riley has been monitoring the SMM mountain lions since 2002, and in a new study that aimed to figure out just how close they are to being sucked down the extinction vortex, he found both good and bad news.

Riley and his research team used their years of data on the lions’ movements, genetics, and reproductive and mortality rates to build a computer model of the population and ran thousands of simulations of how the lions would fare over the next 50 years. The lions live in good habitat, have plenty of prey to eat and have mostly avoided conflicts with their human neighbors. When accounting for just the small size of the group and their geographic isolation, the researchers found that the SMM mountain lion population is stable and could potentially grow. The chance that they’d be driven extinct by dying out faster than they could reproduce or by being killed off by accidents or disease is just 15 percent to 22 percent.

When the scientists factored in inbreeding depression into their model, though, things looked much worse. Extinction in the next 50 years became a near certainty — 99.7 percent probable — and would likely happen sooner rather than later.

A group of animals dwindling away on a lonely island of isolated habitat is tragic, but not unprecedented. The Florida panther (a subspecies of mountain lion) was in almost the exact same situation 20 years ago. A population of 20 to 30 panthers were isolated on a patch of swampland after years of overhunting and habitat loss, but were pulled out of the extinction vortex by the introduction of new genetic material — mountain lions relocated from Texas.

The SMM mountain lions will need similar assistance to survive. Riley’s model suggests that just a few new mountain lions coming into the area every couple of years would make the population more demographically and genetically stable and sustainable. The researchers think that letting those lions get into the mountains on their own would be better in the long run than having scientists shuttle them in. Creating a bridge between the lions’ island and other habitats, in the form of a wildlife crossing over one of the freeways, would benefit not just the lions, but other species like bobcats and coyotes that live in the mountains.

Fortunately, such a bridge has a very real future. A proposed crossing structure over U.S. Route 101 at Liberty Canyon — which would link the Santa Monica Mountains and the animals in them with habitats and populations in the Simi Hills, Santa Susana Mountains and Angeles National Forest — has strong support from California’s state transportation agency Caltrans, the L.A. City Council and California state senators.

The hitch is funding the $50 million project, which so far has a little over $1 million dedicated to it from public and private sources. The National Wildlife Federation is working hard to secure the rest — tapping actor Rainn Wilson for support and having NWF California Regional Executive Director Beth Pratt-Bergstrom retrace the 50-mile journey one lion, the famous P-22, took from the mountains to L.A.’s Griffith Park to raise awareness of the project; the goal is to start construction in 2020.

If the project is completed, it would be the largest and most ambitious wildlife crossing in North America and a model for conserving other large carnivores in fragmented urban areas. The plan is in place, the will is there, and now it’s a race to fill the coffers and get shovels in the dirt before Los Angeles’ wildest residents disappear.