L.A. Metro May Make Room for Homeless on Its Properties – Next City

L.A. Metro May Make Room for Homeless on Its Properties 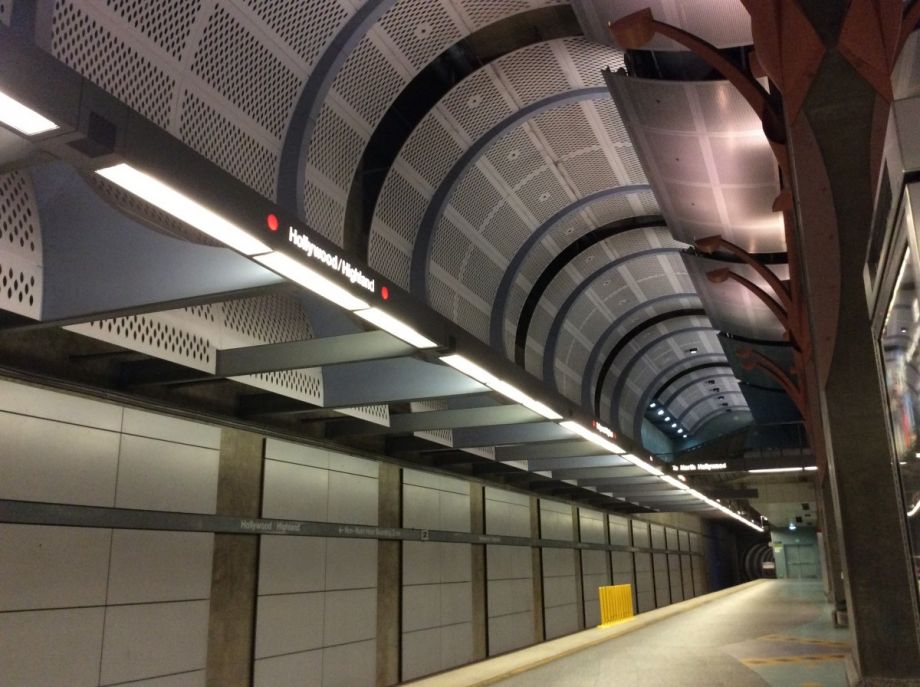 L.A. Metro May Make Room for Homeless on Its Properties
According to a news report in the Los Angeles Times, the city’s rising tide of homelessness is contributing to the decline in ridership on its buses and trains. Nearly three of every 10 Metro riders surveyed told the Los Angeles County Metropolitan Transportation Authority that they stopped taking transit because they felt unsafe, and some overnight bus routes function as rolling homeless shelters.

To help stem the ridership losses, L.A. Metro is looking for places where it can put supportive services for the homeless on property it owns. For instance, people living in their cars could park them in Metro-owned parking lots, or showers and storage lockers could be placed on vacant land it owns around Metro stations or bus storage yards.

At a March 21 meeting, Metro’s board of directors asked agency staff to compile a list of places where support and service facilities could be located. Los Angeles County Supervisor and Metro director Mark Ridley-Thomas also recommended the agency expand an existing outreach program for the homeless along the Red Line subway, where riders frequently complain about cleanliness and safety, to other rail lines as well as the buses that carry 70 percent of Metro riders.

Metro’s move comes as the city of Los Angeles itself is identifying places where it can place supportive housing and other service facilities for the homeless on city-owned land.

Agency staff will report on expanding the outreach operation in May and describe what property could be used for homeless services later this year.

Dublin’s First Metro Will Give City an Airport Rail Link
Ireland’s National Transport Authority (NTA) and Transport and Infrastructure Ireland (TII) have released details about the likely route for Dublin’s first metro line, a €3 billion ($3.73 billion U.S.), mostly underground route that would give the city a rail link to its airport for the first time.

The International Railway Journal reports that the likely route for the line, dubbed MetroLink, will run 26 km (16.16 miles) from Estuary in the north to Sandyford in the south via the airport and the city center. One of the line’s two underground sections will pass beneath the airport, while the other will run from just south of Dublin City University through the city center to a point near Charlemont where it will connect to the existing Luas Green Line light rail line to Sandyford. That Green Line segment will be upgraded for metro operation as part of the project.

The line will have 25 stations, 15 of them new, and is projected to carry 15,000 passengers per hour at peak times when it opens in 2027. Plans call for the line to run 30 trains per hour in each direction.

“We don’t believe that a bus system or a standard Luas line would be able to accommodate that number of passengers and that is why MetroLink makes so much sense,” NTA CEO Anne Graham told the IRJ.

The next step on the road to MetroLink is a series of informational meetings with communities along the proposed route. Construction is slated to begin in 2021.

The 9.7-km (6.03-mile), 15-station line connects the city center and its universities with newer areas on the urban fringe.

Alstom had to make special modifications to the 23 Citadis trams it supplied for the line to enable them to operate reliably in the city’s hot desert climate, where sandstorms are a regular occurrence. Those modifications included reinforcing the air conditioning system, applying a solar protection film to the windows, modifying the traction and braking systems to make them more resistant to sand infiltration, and protecting exposed parts like shock absorbers, joints and pantographs.