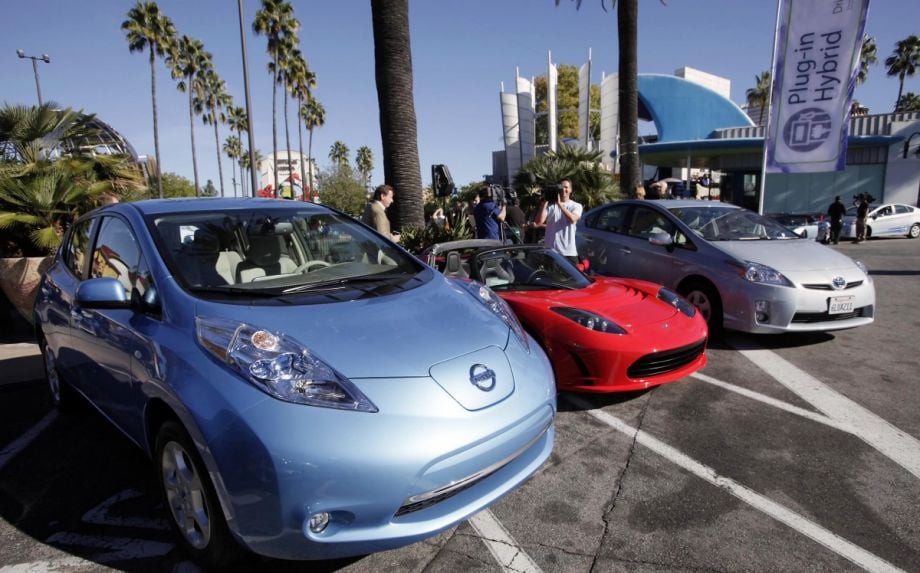 Electric cars from Nissan, Tesla and Toyota are presented at a news conference in Los Angeles. (AP Photo/Nick Ut, File)

After California’s Public Utilities Commission approved a pilot program last week that aims to bring 1,125 electric vehicle charging stations to low-income communities, Los Angeles is already getting started. The city unveiled what is likely the country’s first charging station mounted on a utility pole in the Watts neighborhood the same week.

A 2014 state initiative set a goal of 1 million electric vehicles on California’s roads by 2023, while also requiring the California Air Resources Board to fund improved clean transportation options in communities most impacted by pollution and poverty. So far, those initiatives have included a financing assistance program in the Bay Area and incentives for Central Valley drivers who swap in high-polluting cars for more efficient ones.

“This represents a crucial addition to California’s groundbreaking efforts to make electric vehicles affordable and accessible to communities most impacted by poverty and pollution,” said Joel Espino, environmental equity legal counsel at the Greenlining Institute, a public policy advocacy organization focused on environmental justice. “Low- and moderate-income Californians want and need clean transportation, and we can only reach our clean air and climate goals if EVs become a practical alternative in all neighborhoods.”

“Access to EV charging is essential to that effort, and to dispelling the myth that electric cars are just for the wealthy,” continued Espino, who took part in the negotiations that led to the pilot’s approval.

Los Angeles’s utility-pole-mounted chargers might lead the way. Curbside EV stations utilize underground electric lines, requiring streets to be ripped up for installation. According to an LADWP statement, the installation of power pole chargers doesn’t require anything so destructive and is far less time intensive.

L.A. has already surpassed Mayor Eric Garcetti’s goal of 1,000 public chargers installed in the city, including 100 on city property, but there’s more to go. Currently, there is only one public EV charging station for every 20 EVs in the city. Over the next five years, LADWP is aiming for over 10,000 chargers installed, including 1000 on city property.

“Installing EV chargers on power poles — a job that took less than one day and four LADWP crew members to complete in Watts — is one way the City can extend the range of EVs quickly and effectively,” said Daniel Baker, an LADWP electrical engineering associate.

Three to four more power pole-mounted EV chargers will be installed by the end of 2017.