L.A.‘s Mid-Century Past May Be Sexy, But It’s Still the Past – Next City

L.A.‘s Mid-Century Past May Be Sexy, But It’s Still the Past 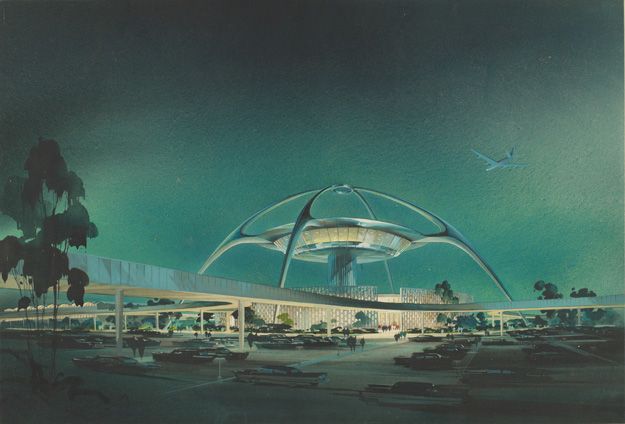 California may be getting denser even as much of the rest of the country appears to move in the other direction, but that doesn’t mean nostalgia for its storied car culture is going anywhere fast.

A new exhibit, now on display at the J. Paul Getty Museum in Los Angeles and which will hit Washington, D.C.’s National Building Museum this fall, celebrates the period of time when L.A. — and much of Southern California — was a booming powerhouse sprawling ever outward.

This blurb, taken from a press release, reveals that the exhibit will deal with a Los Angeles much different from that one now led by outgoing Mayor Antonio Villaraigosa, whose investments in public transit and ambitious parks reimaginings these past eight years have made him something of an urbanist poster boy in a region that is itself an urban success story.

Over at the California Planning and Development Report, William Fulton took a look at new census data, which found that density in metro areas nationwide dropped by a combined 5.5 percent. After breaking it down for California, however, Fulton determined that density 14 of the state’s 22 metro areas increased. While Los Angeles-Orange wasn’t included on this list, a number of suburban and exurban metros were. These include Ventura County north of L.A. and Inland Empire to the east, both of which had weighted population density increases exceeding 5 percent.

That fact stands in stark contrast to the realities depicted in Overdrive. During the five decades considered in the show, the population of L.A. grew by some two million people and jumped from slot five to slot two on the nation’s largest-cities list. The city also lost its reputation as an industry town for Hollywood as the region became a major economic center in such fields as tech and engineering. (For a detailed account of how L.A. grew from a WASP-y pastoral hideaway to a global neoliberal megacity, definitely check out the 1990 book City of Quartz by Mike Davis.) 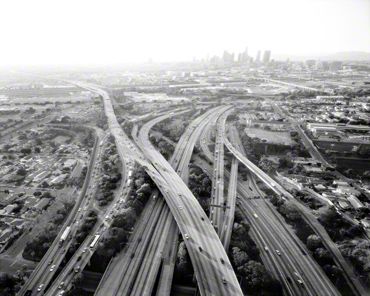 The drawings, photos, models and vintage film clips on display illuminate valuable points about Southern California’s story, not only for capturing a certain golden age in American history now going through a pop cultural revival (Mad Men, anyone?), but also for the insight into how architects and planners of the time envisioned the future of cities.

But as museumgoers take in this exhibit, they should remember that such dives into the sexiest of America’s sexy past are just that — looks back at the past. The glamour of Modernist mansions built into hillsides has faded, as has the mechanical majesty of a knotty cloverleaf.

That’s why the fact that most California metropolitan areas saw dramatic increases in population density over the last decade is so paramount.