L.A. County Voters Opposed to Transit Tax Are Where You’d Expect Them – Next City

L.A. County Voters Opposed to Transit Tax Are Where You’d Expect Them 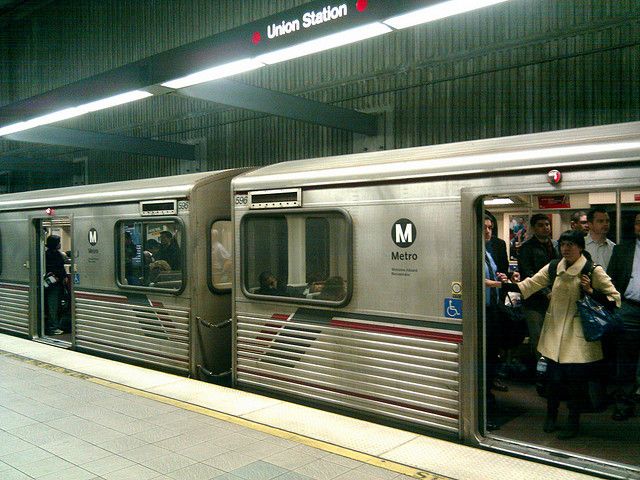 In November, a Los Angeles County ballot initiative that would have extended a half-cent sales tax to fund transportation projects narrowly failed to get the required two-thirds of the vote it needed to pass. Now, the Los Angeles Times has found that the minority of voters who struck the tax down are clustered in areas at the county’s fringe.

The tax, known as Measure J, would have raised an estimated $90 billion for long-term transit extensions and improvements by adding 30 years to a previous half-cent transit tax, Measure R, which passed in 2008.

But because it only received 66.1 percent of the vote, rather than a full 66.7 percent, Measure J didn’t find the same success as its predecessor. (California law requires a two-thirds supermajority for special taxes to pass at the local level.) In all, last year’s tax came up about 16,000 votes short out of the 2.9 million cast.

Not five years ago, Measure R passed with nearly 68 percent of the vote. Where did the drop-off in support come from?

“A minority of voters living in a daisy chain of small, suburban and relatively upscale enclaves around the county’s outer rim,” is how the Times, in a surprisingly harsh lede, describes those who voted against Measure J. A few of these far-flung areas showed a drop of six percentage points or more in support for the half-cent tax since the Measure R vote. 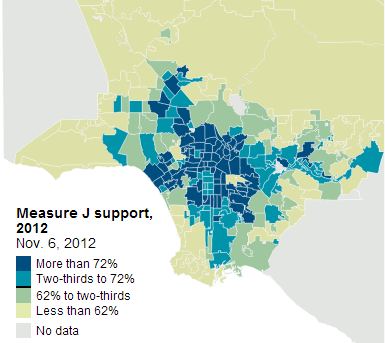 Accompanying the Times is an interactive map that breaks down how different parts of Los Angeles County voted. Neighborhoods like Downtown L.A. and Westlake saw more than 80 percent of their voters supporting the tax. Outer areas like the Rancho Hills Estates had support that dropped close to 50 percent. Very few, however, seemed to have dipped lower than that. (Southeast Antelope Valley, anyone?)

The debate over Measure J didn’t split along a clean pro-transit/anti-transit divide. Many pro-transit local advocacy organizations, including those with names like the Crenshaw Subway Coalition, opposed the initiative because, they argued, the tax money wouldn’t go toward projects in their neighborhoods. As Streetsblog reported in November, the rejection of Measure J was not simply an anti-transit vote, but concerned many factors including gentrification and equal distribution of resources.

It also bears mentioning that among areas in central parts of the county, there’s no clear class divide. Hollywood and Santa Monica reported numbers similar to East Los Angeles and South-Central (between 75 and 85 percent voting in support). Watts and Compton had turnouts similar to those seen in Long Beach and the Pasadena (between 60 and 75 percent in support).

Notably, only 59 percent of Beverly Hills voters supported Measure J, a drop of more than 16 percentage points since Measure R. This likely has to do with the tony neighborhood’s contingent opposing the “Subway to the Sea,” an extension of the Purple Line.

As the Times notes, outgoing L.A. Mayor Antonio Villaraigosa, as well as the two front-runners contending for his seat this year, have supported Measure J and say they will continue to push for more transit in the region.