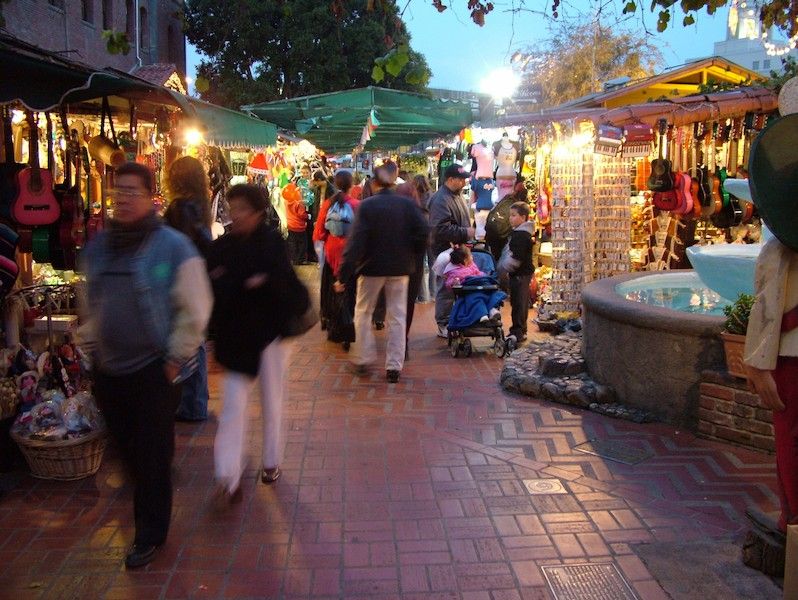 Part of El Pueblo de Los Angeles National Historical Monument, in downtown L.A., Olvera Street is a brick-paved corridor that was the birthplace of Los Angeles. Along Olvera, Chicano merchants still sell sarapes, lucha libre masks, Mexican candies and taquitos. A major tourist draw in downtown for nearly a century, the streets around El Pueblo are now home to some of the area’s largest homeless encampments.

Pressure is mounting for city leaders to take action on homelessness across L.A. County. The encampments that make up the famous Skid Row in downtown L.A. can now be seen across the city, at local parks, subway platforms and bus stops, parking lots and sidewalks, leaving organizers who work with the unhoused calling for immediate action from City Hall.

Some activists are resorting to extreme tactics. An Activist with Los Angeles Catholic Worker, which operates a free soup kitchen and hospitality house for the homeless, Kaleb Havens spent Ash Wednesday to Easter (the 40-day Catholic season known as Lent) chained to an iron fence, fasting in protest for most of that time, calling on leaders to not simply throw money at homelessness.

“[The solution is] not just creating these social services, but making them humane,” he told LA Taco, an independent news site that has been documenting the homelessness crisis over the past few months.

In what Council Member José Huizar calls a “triage-like” response, city council last month voted in favor of establishing a temporary shelter on a city-owned parking lot that sits at the southern edge of El Pueblo. The shelter would be made up of five trailers: three equipped for temporary housing, another one for restrooms, showers and laundry, and one for administrative work and case management.

The L.A. Homeless Services Authority would contract ongoing services to a non-profit service provider. Participants would work with case managers to find permanent housing. According to Huizar’s office, the first year costs for the shelter would be about $2.4 million for the design and installation of the trailers, as well as sewer and water costs. Yearly operations are estimated at $1.4 million. The site is expected to launch by summer 2018.

L.A. City Council also voted last month to initiate similar sites on other city-owned property in and around Skid Row, and have directed city staff to find potential funding sources and locations.

According to Huizar, the El Puebla parking lot is an excellent pilot ground because the area has the largest concentration of individuals experiencing homelessness in downtown L.A. outside of Skid Row.

In December, city council voted to turn over ownership of another city-owned property at 1320 Pleasant Avenue in the nearby Boyle Heights neighborhood to Jovenes Inc., which provides shelter, transitional housing, and permanent housing to homeless youth. According to Jovenes, youth homelessness has increased by over 64 percent in L.A.

Officials from the L.A. County Metropolitan Transportation Authority are grappling with a loss of ridership on buses and trains by passengers put off by the growing number of homeless people sleeping at subway platforms or riding the buses in place of sleeping on the street. The transit agency has begun to look for places where they can place supportive services for the homeless on agency-owned property, including allowing people living in their cars to park them in agency-owned parking lots, or installing showers and storage lockers that could be placed on vacant land the department owns around transit stations or bus storage yards. The agency created a $9 million loan program last year to encourage affordable housing near its stations.

Earlier this month, L.A. City Council also approved two new laws, one that would speed up the often lengthy process of implementing homeless housing projects and, another that would make it easier for motels to be converted into temporary housing.

Meanwhile, the Clean Streets Los Angeles program has fielded nearly 6,000 requests by residents asking for help to clean encampments throughout the city.

These are just a few short-term measures city leaders are taking to help stem the homelessness epidemic in Los Angeles County.

Rising rents, coupled with a shortage in affordable housing units throughout the region, has resulted in a homeless population that an L.A. Times editorial estimates at more than 57,000 in L.A. County. The situation has forced some to relocate to far-flung parts of the region, share living quarters with multiple families, and or resort to renting out box trucks or RVs.

In the long-term, Measure HHH, a ballot initiative that voters approved in late 2016, authorizes a $1.2 billion bond to help pay for 10,000 units of affordable housing over the next decade.

“The city has done amazing things over the past couple of years to address this problem, that for many, many years have not been addressed,” Lipka says.

While all efforts should be place to address permanent housing solutions, the city’s use of sites like at El Pueblo will help to manage the problem in the immediate term, Lipka adds.

“This is the model I want to see used next to create a triage-like response in Skid Row,” he says of the parking lot shelter approach. “Unfortunately, as the single largest homeless encampment in the nation, Skid Row is ground zero of our homeless challenge and we must step up our efforts to address it.”