L.A. Community Gets $35 Million to Tackle Environmental Challenges — and Much More – Next City

L.A. Community Gets $35 Million to Tackle Environmental Challenges — and Much More 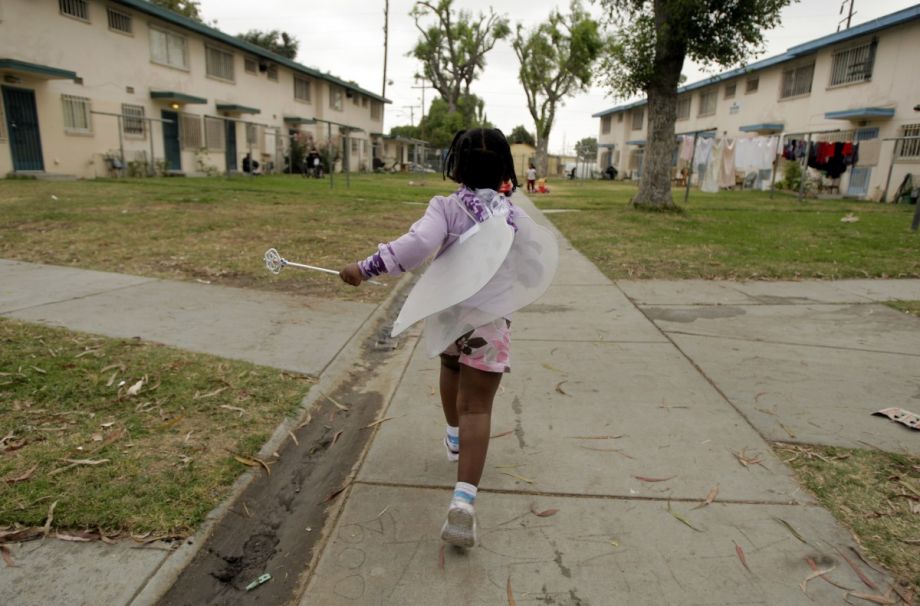 Jamila Williams, 3, wears a fairy tale costume as she runs down a walkway at Jordan Downs housing project in the Watts section of Los Angeles, in this 2009 file photo. (AP Photo/Jae C. Hong)

The neighborhood of Watts in Los Angeles is one of three communities in California to share in $140 million in grants aimed at reducing greenhouse gas emissions while chipping away at a host of urban ills, from public health disparities and housing shortages to pollution and displacement.

The grants, announced late last month, are the first to be released as part of the state’s Transformative Climate Communities (TCC) program. The TCC program is designed to serve three overarching goals in disadvantaged communities—reducing emissions, strengthening economies, and improving public health. And it’s funded with the proceeds of California’s cap and trade system, enacted in 2013 to reduce greenhouse gas emissions statewide. In addition to Watts, which will receive $35 million to plant trees, create new affordable housing, and improve transportation infrastructure, $70 million was awarded to Fresno, and another $35 million to Ontario, a small city east of Los Angeles.

Randall Winston, executive director of the Strategic Growth Council, which was created in 2008 to coordinate all of California’s work on environmental planning, transportation, and economic development, says that the TCC grants are meant to help disadvantaged communities design their own solutions to urban and environmental problems. The Strategic Growth Council used a tool called CalEnviroScreen, which ranks California communities based on their relative burdens from pollution and other health and social indicators, to weigh applications. Even before the TCC grants were officially announced last month, the SGC had decided that half the money would go to Fresno, which includes all of the ten most disadvantaged census tracts in the state, measured by CalEnviroScreen. Another quarter of the money was set aside for L.A., which has the highest number of disadvantaged census tracts in the state.

“This program out of the gate sought to target the most polluted and poorest parts of the state,” Winston says.

The application from Watts rose to the top for a number of reasons, Winston says. The city, which is 72 percent Hispanic/Latino and 26 percent African-American, has lower levels of educational attainment, half the median income, and a greater portion of rent-burdened residents than the state as a whole, according to data gathered by Watts Rising Collaborative, the group that submitted the application. And the history of Watts—six days of riots in the 1960s were followed by a state commission report that identified many of the causes of disparities in the area but was largely ignored—provided a “powerful” backdrop to its application as well, Winston says.

But mostly it was the plan itself, and the team that put it together.

The Watts Rising Collaborative includes more than a dozen partner agencies, led by the Housing Authority of the City of Los Angeles. According to the collaborative’s organizational chart, responsibility for preparing the application fell to the housing authority and the City of Los Angeles, but top-level guidance on the plan was the purview of a community leadership council, which include neighborhood representatives. Applicants for TCC grants were required to sign contractual agreements spelling out how community engagement would be included in both the planning and implementation of the proposals, Winston says.

“To me that’s so important, because it speaks to how you can keep residents engaged,” Winston says. “These are long-term investments. It’s not the case that we’re looking to award $35 million and walk away. We’re looking to see the human infrastructure in place to sustain resident involvement and input. Watts has built up an infrastructure that is kind of like no other.”

The work that’s planned in Watts is focused around the Jordan Downs public housing project, which opened in the 1950s. According to the Watts Rising application, it will involve the construction of 216 new affordable housing units, 300 new solar roofs, 150 new energy-efficient homes, 118,000 square feet of retail, five miles of bike lanes, 30 blocks of pedestrian improvements, and 5,000 new trees. Plans also included new electric buses and an electric car-share program for the public housing development. In addition to the many community goals it will serve, it’s expected to offset around 70,000 metric tons of carbon dioxide emissions.

Jenny Scanlin, director of development services for the housing authority, says the collaborative set its goals first, and then used garage-sale stickers to price out various individual projects, to make decisions about priorities. It began by culling through the potpourri of planning and redevelopment documents that the neighborhood has worked on over the years. A lot of projects and initiatives were already in “various stages of germination and funding,” Scanlin says. And while Watts has a strong network of community groups formed to address various problems, such as the Watts Gang Task Force, Scanlin says that a new degree of participation was needed to compete for the grants.

“There was not necessarily a collaboration of folks working solely around environmental issues, or the confluence of economic, environmental, and public health issues, so we really had to create something new to be fully responsive to the call of TCC, or the intention of the program,” Scanlin says.

Importantly, the project will also be guided by a policy of non-displacement. The work that will be done in Watts is done to improve quality of life for the community that’s already there. Scanlin says that the housing authority, like others around the country, “learned some very important lessons” from the HOPE VI urban renewal program that began in the 1990s. Through that program, housing authorities “temporarily” displaced many public housing residents only to see many of them unable to return to rebuilt projects. Policies adopted by the Watts Rising Collaborative assert that no residents will be displaced, and that new units will be mostly targeted to extremely-low-income and very-low-income families.

“It’s about recognizing the importance of keeping this fabric of the community together and recognizing how tied our families are to Watts and the communities they live in, and not wanting to disturb those ties,” Scanlin says.

Winston says that a lot of the applications for TCC grants included non-displacement policies. And while the Strategic Growth Council can’t force local governments to adopt those policies, it is thinking through ways to incorporate non-displacement in future grants. The group will be updating its guidelines this spring and hopes to be able to solicit more grant applications late this year.

The program has already encouraged communities to think about ways to integrate investments in housing, transportation, infrastructure, and greening—areas that have traditionally been siloed, Winston says, with local recipients pursuing grants in piecemeal fashion. The TCC program is meant to bring those efforts together.

“We really do think this program is geared to change the way we think about our community investments,” Winston says.