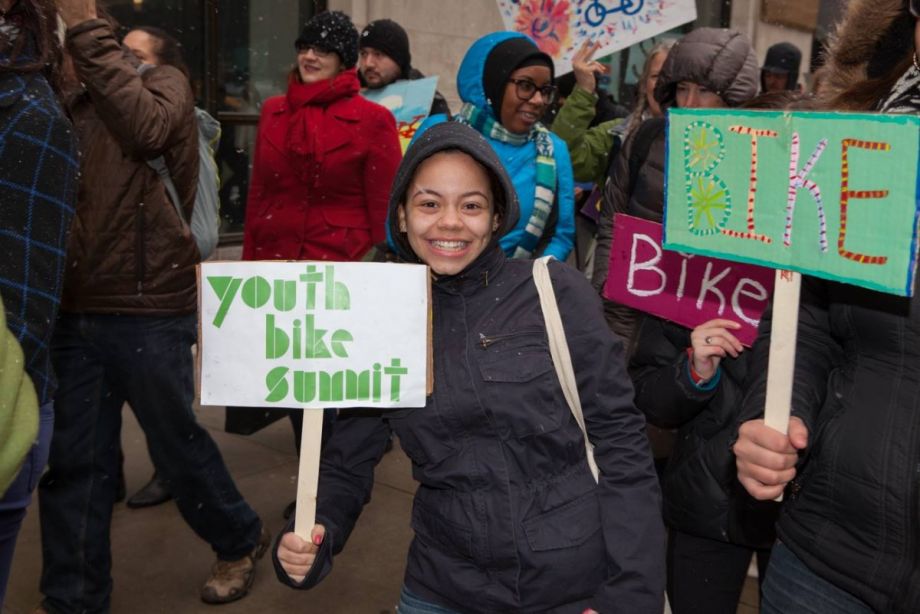 When Jamal Triggs was a kid, his mother wouldn’t let him out of the house much. They lived in Chicago’s Woodlawn neighborhood, and she worried he would get caught up in the persistent gang and police violence. His father, a Marine, would take the kids out when he was home on leave, but that was only so often. In his absence, Triggs’ uncle would take the kids out to the Lakefront Trail to ride. Uncle Bobby was a passionate cyclist and when Triggs was 14, he pushed him toward the youth bike programs at Blackstone Bicycle Works, a nonprofit community bike shop and youth education center dedicated to “empowering youth, teaching mechanical skills, job skills and business literacy.”

Triggs had long been mechanically inclined — “I was one of those kids who took everything apart and put it back together,” he says — and he rose rapidly through Blackstone’s programs to become a master mechanic. Along the way, he says his grades improved and his self-confidence grew.

“Blackstone changed my whole mindset of how I view the world,” says Triggs. “You have these positive people telling me I’m the future and that what I do right now will impact my kids and the next generation. I just went along and came hard at it.”

Now 24, Triggs helps run the show at Blackstone as a youth mentor and instructor, a personification of the empowerment and education work at the heart of youth bike programs. He was in Seattle on February 14th — along with 428 people from 28 states and Mexico —for the annual Youth Bike Summit. This was the Summit’s fifth iteration (and first held outside of New York City). The weekend draws bike advocates, educators, industry leaders and, of course, young people. They gather to share ideas and learn from workshops and speeches.

“You hear people say ‘young people are our future,’” says Pasqualina Azzarello, director of Youth Bike, the nonprofit behind the Summit. “That’s true, but they’re also very much the present. This is about the value that engaging youth can bring to the movement, to traditional advocacy itself.”

The crowd at the Rainier Valley Cultural Center in Seattle’s Columbia City neighborhood was more diverse than any other bike event I’ve seen. The Summit was filled with young and old, black, Latino, Asian, white and more. Given that youth bike programs such as Bikes Not Bombs, Major Taylor Project, Frogtown Crew and Neighborhood Bike Works all work primarily in communities of color and in low-income neighborhoods, that should come as no surprise. Given that the bike advocacy world trends so white, it did.

When the emcee announced that this year marked the first time kids outnumbered adults at the Summit, the already buzzing crowd exploded into cheers. The energy only swelled as the radical marching band Chaotic Noise Marching Corps filed into the room to lead a parade of attendees to the nearby Interagency School where the day’s workshops were taking place.

The Youth Bike Summit grew out of the 2010 National Bike Summit in Washington, D.C. At the time, Azzarello was executive director of Recycle-a-Bicycle (RAB), a nonprofit community bike shop in New York City centered on youth empowerment. She and two teenagers from the program, Kim and Kristi, headed down to D.C. to attend the National Summit. When they arrived, they discovered that Kim and Kristi were not only the youngest people in the room by about 20 years, everyone wanted to talk to them and find out what young people had to say about advocacy. Coupled with a pivotal talk by industry and advocacy leaders, the experience changed how Azzarello thought about youth bike education.

“I began to understand that Recycle-a-Bicycle is providing services that communities want, that mayors want, that the President wants. We’re doing really serious community engagement work through biking,” she explains.

Azzarello, Kim and Kristi spent the bus ride back to New York talking about young peoples’ role in advocacy and the need for a better space for youth voices. By the time they rolled into the city, they’d hashed out rough plans for the Youth Bike Summit. Azzarello says from the get-go, there was a huge demand. Though they only had five weeks between locking in their venue and holding the Summit, 175 people from 13 states and Canada attended that first event in January 2011.

It’s clear the enthusiasm hasn’t slowed. As I floated around workshops about job skills training, developing bike education curriculum, youth-centered advocacy, transit justice and bike-share equity, I heard time and again how inspired people were by their peers.

“I know for a fact we’re doing great work at Bikes Not Bombs, but knowing people are doing the same stuff outside of Boston makes me want to push harder for social justice, feminism, youth empowerment,” said Mykala Jordan, a high-school senior who learned bike mechanic skills through Bikes Not Bomb’s Earn-a-Bike program.

Thomas Nelson, an 18-year-old with Cycles for Change in St. Paul, was attending his third Summit. He echoed Jordan’s sentiments. “I care about making sure transportation systems give access to everyone. It’s exciting to learn about what other cities are doing and share what we know.”

Bikes — riding them, fixing them, advocating for them — are the thread that draws everyone to the summit. But it’s about so much more than bikes.

“A bike can be a tool for empowerment. It can be transportation. For some people it’s a good social way to make friends. Some people are just really into the mechanics. For some people it’s a career. It doesn’t mean one thing to any one person and that’s what I love about cycling,” says Karen Overton, executive director and founder of RAB in New York and a longtime youth bike education leader.

Overton says the Summit is creating a stronger national network of youth bike educators that’s helping them get noticed outside of their traditional grassroots circles. “We’re connecting with the industry. They’re paying attention. I think we’re creating the leaders of the movement, industry and advocacy.”

It was remarkable to hear young people connect their experience with bike education to fighting for better access to transit in the Portland area, organizing actions in Boston around youth unemployment, bucking gender stereotypes as mechanics, finding support networks that helped them do better in school and find jobs and so much more.

When Brook Negussie, the keynote speaker who’d done Cascade Bicycle Club’s Major Taylor Project, encountered what he thought was an impossible hill, he says the ride leader told him, “don’t focus on the top of the hill. Just take it one pedal stroke at a time.” Negussie took the message to heart, worked hard to graduate top of his class, and is now in an engineering program at University of Washington.

“When I think of what biking and the Major Taylor Project mean to me,” he says, “it’s endless possibility.”