Kenosha, Wisconsin, and the Shooting of Jacob Blake: A Case Study in Property Over People – Next City 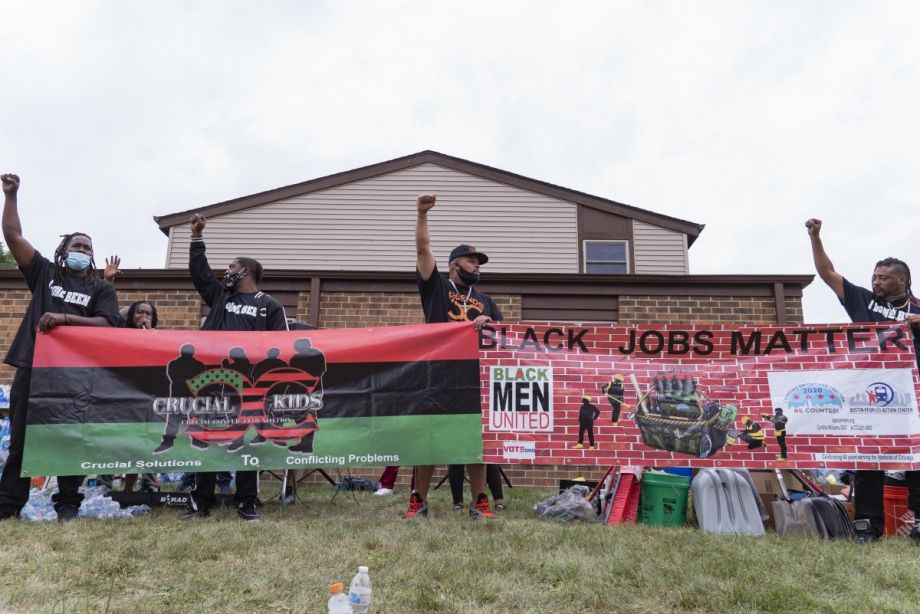 Part of a Justice for Jacob event, organized by the family of Jacob Blake, in September 2020. (Photo by Milwaukee Teachers' Education Association (MTEA) / CC BY-NC 2.0)

Kenosha, Wisconsin, is a mid-size city on the southwest shore of Lake Michigan, halfway between Chicago and Milwaukee. Previously little known outside of the Midwest, Kenosha burst into the national consciousness in August 2020, when Jacob Blake, a 29-year-old Black man, was shot in the back seven times by a police officer. Yet Kenosha was a tinderbox ready to blow. Many small municipalities are just like it. Last August, Blake’s shooting, coming several weeks after the killing of George Floyd in Minneapolis, also at the hands of the police, sparked days of protests and unrest. It was a cycle that had already occurred in the streets of many cities, as the Black Lives Matter movement mobilized public protest of several high-profile killings of unarmed Black Americans by police officers in 2020. The Kenosha protests took a dramatic turn on the third night of protests when a 17-year-old white vigilante crossed the state line from Illinois and murdered two protestors and wounded another.

This city became part of the lexicon of the spring and summer of 2020, in which the nation had to reckon with the undeniable reality of racist police violence. As with the other high profile police shootings across the country– Floyd, Breonna Taylor, Rayshard Brooks, Ahmaud Arbery – protestors in Kenosha decried the systemic racism in and called for serious reforms in the policing and criminal justice systems.

Earlier this year, the city announced that no police officers would be charged in the shooting of Jacob Blake – which for many Kenoshans only exacerbated the underlying community tensions and the need for real solutions.

These killings are manifestations of the dark and violent history of racism in the United States, and police reforms are desperately needed. However, our broken public safety system is only part of the complex municipal infrastructure that gives rise to racist violence by police.

One key factor that would, at first glance, seem unrelated, is how local governments deploy economic development subsidies and tax abatements that don’t help the people who need it most.

Kenosha is a telling example of how a “Property over People” ideology can directly contribute to a massive economic divide among residents. The bullets that paralyzed Jacob Blake were fired by police, but their roots lie in decades of disinvestment and destabilization of communities of color.

In many ways, Kenosha, and Jacob Blake’s shooting, is a tragic case study through which we can examine how a “Property over People” development ideology gets it wrong. Unfortunately, it is only one of many such examples.

In 2015, in the wake of the killing of Michael Brown in Ferguson, Missouri, The Atlantic highlighted the deep culture of racism in Ferguson’s law enforcement system that was the immediate factor in Brown’s death, as well as the persistent harassment and violence toward African Americans that led to “the social, economic, and legal subjugation of black people.” However, it was the presence of a Fortune 500 company — Emerson Electric — benefiting from massive tax breaks that contributed to consistent budget shortfalls, cuts in social services, and the city’s need for excessive fees and fines to offset lost revenues and, ultimately, the resulting community instability and tensions that are ripe for incidents like the killing of Michael Brown.

Much like Ferguson, Kenosha is a test case of how economic and fiscal policy are linked directly to racial violence.

A common tool used by many municipalities to “purchase” economic development, Tax Incremental Financing (TIF) is tied to Tax Incremental Districts (TIDs), in which property taxes rise as redevelopment drives higher values. Meanwhile the taxes get split into two streams: a base value (the old rate) continues going toward schools, police, fire, etc, while all the increase (the “tax increment’) is diverted from public services to subsidize the redevelopment of the TIF district. The goal of TIFs is to attract long-term investment and positive economic spillover to offset the tax revenue these districts divert from public services.

TIF laws originally targeted blighted or distressed areas for redevelopment, but many states have loosened such regulations to the point that TIFs can finance development in more affluent areas or “greenfields” on urban fringes. Wisconsin is one of the nation’s most noteworthy offenders of excessive TIF usage, and within Wisconsin, Kenosha is the most egregious example, having the highest percentage of TIF-designated property in the state. As a result, Kenosha sacrificed and continues to sacrifice significant tax revenue, giving away 29 percent of its revenue to tax abatements and economic development subsidies as recently as 2016.

What about the promised increases in tax revenue due to higher property value and jobs created through economic growth? As in many cities, those revenues didn’t materialize. Facing budget shortfalls, Kenosha had to enact significant cuts, which had the hardest impact on low-income communities. One very specific example: In 2017, Kenosha approved a plan for the use of body cameras as a way to increase police accountability, but ultimately chose not to purchase them due to a stated lack of budget capacity.

As we know, in 2020, the police officers involved in the shooting of Jacob Blake did not have body cameras. Perhaps cameras would have improved police accountability. Perhaps they would have prevented the senseless shooting of Jacob Blake. Instead, a “Property over People” development ideology left Kenosha ripe for a violent incident involving police and communities of color – and the social unrest that followed.

The cycle does not end with the shooting. In the wake of the decision not to charge the officers involved in the shooting, Jacob Blake’s family filed a civil lawsuit against the Kenosha police department. The city is already facing two lawsuits of $10 million each, stemming from victims of 17-year-old vigilante Kyle Rittenhouse during the protests, one severely wounded and one killed. More collateral costs to the city leading to more budget shortfalls and more hardship on struggling citizens — largely communities of color.

Kenosha’s experience is sadly typical. In 2017, then-Governor Scott Walker arranged for massive state subsidies to Foxconn in exchange for the promise of making southeast Wisconsin a major tech hub and providing 13,000 jobs. In April 2021, the State of Wisconsin announced a drastically pared down deal where Foxconn reduced its investment from $10 billion to $672 million as well as the projected new jobs created from 13,000 to 1,454. This was a massive corporate giveaway with little economic benefit.

According to research by Good Jobs First, state and local revenues are $70 billion less as a result of tax abatements. In addition, an analysis by Governing Magazine found that among the hardest hit cities were mid-sized or small municipalities that made high use of TIFs to fund major development projects.

As a result, cities providing higher levels of tax abatements tend to also have higher rates of economic inequality. Economic incentives target business districts rather than low-income communities, while at the same time forcing severe budget cuts whose effects are harshest on those same communities.

The tragically recurrent pattern is that businesses and governments focus on land and property values as the key metric of economic progress rather than focusing on residents as the engine for economic development. Property values in targeted districts artificially rise, resulting in profits for companies with minimal real impact on residents who most need greater economic opportunity – mostly people of color who are already bearing the brunt of decades and centuries of oppressive economic policies. The increasing economic divide exacerbates situations where law enforcement, instead of being guarantors of public safety for the entire population, is functionally protecting economically prospering communities—and the buildings within them—from lower-income Black and brown communities.

It is tempting to find specific villains to blame for these destructive policies. Certainly, in many specific cases, we can identify specific shady politicians and nefarious CEOs. At the same time, there may be public leaders who are generally committed to economic development but are naive about the realities on the ground. But the ultimate issue is the “Property over People” ideology that has led to property primacy and over-protection of real estate, at the cost of resident safety.

It is worth noting that in the protests following Jacob Blake’s shooting, armed vigilante groups (including Kyle Rittenhouse) came to Kenosha with the express purpose of protecting local businesses and property. This prioritizing of property was also evident in Rittenhouse’s legal case: though he killed two persons and wounded another, he was released from jail on a $2 million bond — funds raised by the conservative group Fight Back, which cites as its mission “to protect and defend the constitutional rights, livelihoods and property of people and businesses that are being targeted and destroyed.” This privilege is not afforded to many protestors in Kenosha and other cities who were charged for lesser crimes against property.

When the decision to file no charges in the shooting of Jacob Blake was announced, many Kenoshans braced for another round of unrest, but despite much anger, none occurred.

That is far from the end of the story — either in Kenosha or throughout the United States. The anger, the wounds and the underlying conditions won’t go away. More tragic and needless shootings of African Americans by police will happen – at least in the near future. We can hope that each horrific episode further shocks the conscience of this nation, underscoring the moral urgency and fueling a deeper commitment to collective action.

But we can do more than hope. While advocacy for systemic reforms in criminal justice and education must continue, we need to lay bare the “Property over People” ideology that is at the core of much of our civil unrest and racial violence. We need to identify the specific policies that fuel the cycle of corporate welfare and increasing economic divides. And we need to develop alternative practices, like customized job training, which research suggests is 10 to 25 times more cost effective in creating jobs than tax incentives. Practices like these can foster more equitable economic development that brings communities together rather than tearing them apart.

Chelsea McDaniel is a senior fellow at Activest.

Ryan Bowers is co-founder of Activest.

Napoleon Wallace is co-founder of Activest.