Keep the Rockaway Ferry – Next City 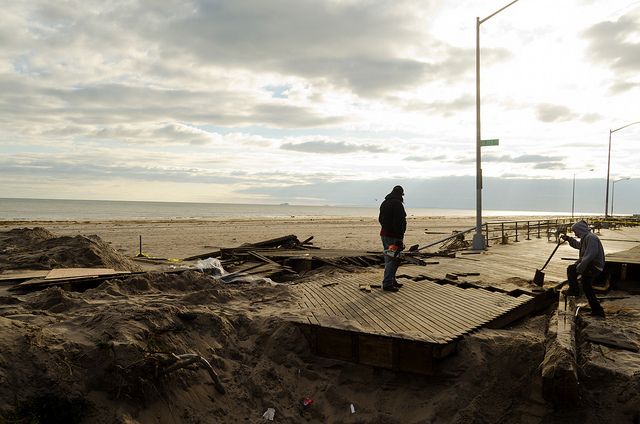 When Hurricane Sandy swept through New York City in October, it wiped out more than 1,500 feet of subway track, destroyed signals and ruined power and communications wires. The damage affected everyone who relies on the MTA, but perhaps no community was more stranded than the Rockaways, located on a peninsula at the southern end of Queens. To remedy the lack of service, the city funded a ferry from the Rockaways to Pier 11 in Manhattan.

MTA service to the Rockaways was restored May 30, and now the ferry could be doomed. Following Mayor Michael Bloomberg’s May 28 announcement that weekday service would continue for another six weeks, and perhaps until Labor Day but no longer than that, locals have started a campaign to keep the ferry.

“We’ve been pushing for stronger and better transportation since long before Sandy,” Angelica Katz, chief of staff for state assembly member Phillip Goldfeder, told me. “And it’s unfortunate that a natural disaster had to bring this issue to light, and now people are actually paying attention that there is a severe lack of transportation to the Rockaways.”

Katz said that between 120,000 and 130,000 people live in the Rockaway district served by the Seastreak ferry, as it’s known. And there are plenty more people in southern Queens and Brooklyn that might use the ferry to get to Manhattan if it were available. If it became permanent, citizens could more easily work it into their daily schedules. And at $2 a ride, it’s cheaper than the subway.

So what stands in the way from keeping the Seastreak alive year round? Money. It costs $500,000 a month to run the ferry, and Katz gave me the impression that neither the city nor the MTA is opening its checkbook any time soon.

“It costs a lot of money,” she said. “Plain and simple. And there’s nothing confirmed on the city’s end that they’re going to try and make this work.”

One idea Katz said has been floated is to have Genting Group, the owners of the casino at the Aqueduct in Ozone Park, partially fund the ferry. Capital New York reported that the casino earned more than $70 million in revenue in March alone. “If they were able to do something in partnership with the city and sort of split the cost of the ferry service,” Katz said, “that wouldn’t even make a dent in their finances.”

Katz is right. If we go on the $500,000 monthly operating costs, it would cost $6 million a year to run the ferry. That’s barely a drop in the bucket for the company that calls itself “Malaysia’s leading corporation.” (Its emphasis, not mine.)

But I’m not here to give you 6 million reasons why Genting should help cover the cost of the ferry, which would bring more people to its casino.

I’m here to tell you how the Rockaways could benefit from keeping the ferry service intact. I took the A train out to the Rockaways the weekend it was restored. I could see signs of a recovery — grocery stores reopened, delis restored, construction crews working on housing projects — but many houses and storefronts were still boarded up and torn apart. Goldfeder said in a press release that the ferry has been instrumental in helping the community recover.

“The ferry is definitely something that would benefit not only people in Rockaway but people in the city who come here,” Katz, who said the petition to keep the ferry has 1,800 signatures, told me. “And there’s no better way to boost the economy in Rockaway than to have people from other boroughs to come here, even for a day trip.”

The Rockaways are really nice. It’s a quick, affordable way to get out of the city for the afternoon without all the carnival trappings of the Coney Island boardwalk. If there were a quicker and arguably more enjoyable way to get there, I imagine more people would frequent the beach and spend cash at local establishments, which would lead to a more robust recovery and, hopefully, more jobs.

But as it stands, the ferry service isn’t going to last much longer. Katz put everything in perspective, saying, “It’s just a no brainer. We’re surrounded by water! Why not utilize that to transport?”