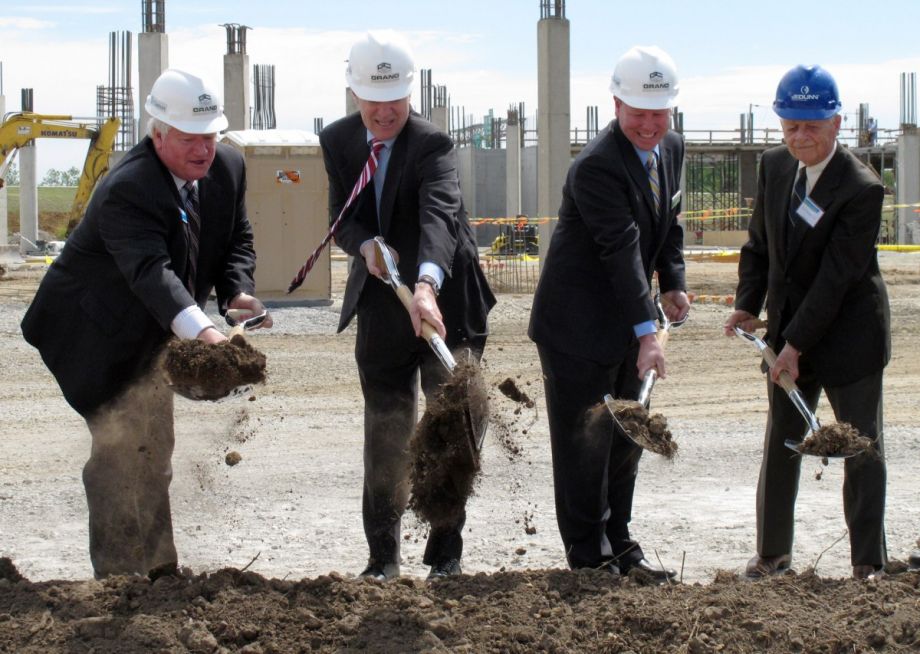 Kansas Gov. Sam Brownback joined a 2012 groundbreaking for an office complex of a company that Kansas lured away from Missouri. (AP Photo/John Hanna)

Elected officials love ribbon cuttings. The press release, the headline, the photo op. Ribbon cuttings are perhaps the most powerful embodiment of the phrase, “all politics is local.” While there are instances where they represent something new, something that adds jobs or opportunity or quality of life where those things have long been denied, lately in the two-state Kansas City metropolitan region, ribbon cuttings have represented something else.

“The Kansas City community is experiencing an economic border war. State incentives are being used to lure businesses back and forth across the state line with no net economic gain to the community as a whole and a resulting erosion of the area’s tax base,” wrote 17 business leaders in an open letter to Kansas Governor Sam Brownback and Missouri Governor Jay Nixon. That was back in 2011.

“There are companies taking out short-term leases in hopes of taking advantage of the incentives more than once,” the letter noted. “Further, the effect of this economic border war is not only erosion of the tax base but a decrease in property values, and the chilling of community relationships on other important metropolitan issues.”

Leading the charge to correct this has been Hallmark Cards, still privately owned and family-led by CEO Don Hall Jr. All 17 companies have significant offices, plants, and/or distribution centers on both sides of the state line, and all of them felt the tax burdens shifting unfairly onto them and their workers. Recent developments represent one step forward but potentially two steps back in their efforts.

Missouri was the first to respond with a sympathetic ear, according to Angela Smart of the Hall Family Foundation, but action took a while. In 2014, the Missouri legislature responded by passing a bill to end the tax incentive border war, but only if Kansas responded with a similar offer within two years. That offer expires on Aug. 28 this year. Meanwhile, Kansas, steeped in a 2014 election and a massive budget crisis of its ultra-conservative governor and legislature’s making, didn’t respond until last month. The Missouri Legislature hasn’t taken too kindly to their offer, viewing it as flawed and not on the same level with the commitment they made in 2014. They also didn’t appreciate Kansas’ response coming so close to the end of their legislative session this year (May 13).

“The working group [of 17 companies] didn’t expect anything to happen overnight, but I don’t think anyone expected five or six years later and we’re still mired in this back and forth,” Smart says. With the expiration of the original offer coming, the foundation is now concerned that Missouri could double down on border war tax incentives. “It could be a giant step backward. We’ve heard that for every dollar Kansas spends on incentives in the region Missouri is going to spend $1.50,” Smart says.

The total number of potential state tax incentive-driven deals is at a historical low, according to Greg LeRoy, executive director of Good Jobs First, a national policy resource center that supports advocates with data and information on the many ways governments at every level subsidize corporations.​ Total real estate or job-creation transactions for which states could compete annually is at 44 percent of 1999’s level.

LeRoy says that peak could have been partly due to the tech bubble. The rise of online retail might have something to do with it. He suspects that Brownback’s peace offering, late and flawed as it was, might have been better, if not for the pressure from local politicians to give them what they need to continue landing ribbon cuttings at corporate office openings.

“Brownback’s dealing with mayors and county executives who, in an economy that’s been very soft for a long time, feel they need to defend their ability to land deals. Even if the deals are coming from a neighboring county that happens to be in another state,” LeRoy says.

To add insult to injury, there’s the structure of each state’s main incentive programs: In exchange for shuffling existing jobs into a state, each side allows companies to keep 95 percent of their employee state income taxes. “It goes right to their bottom line,” Smart explains. “Oftentimes employees don’t recognize the companies are getting to keep 95 percent of the taxes they’re still paying.”

The Hall Family Foundation has played a role in researching the issue regionally. Missouri’s tax incentives and job creation data are public, through the Missouri Accountability Portal. The foundation had to issue a FOIA request for Kansas data. From 2010 to 2015, in the Kansas City metro region, 3,998 jobs have shuffled from Kansas to Missouri, with companies receiving $103 million in Missouri incentives. Over the same period, 5,702 jobs have shuffled from Missouri to Kansas, with companies receiving $159 million in Kansas incentives. If you’re keeping score, that’s a net gain of 1,704 jobs to Kansas, and a net gain of $262 million in taxes paid to the boss.

“The data became a way for us to educate the broader public, by getting it shared in local media, to understand what a community issue this really is. How silly it is,” Smart says.

“It’s hard to explain to people that haven’t been here, but our state line is just a road,” she adds. “The state line is really just not that big of a deal.”

Except, of course, to the local politicians on either side.