Kansas Utilities Cling to Wind Despite Political Tornado – Next City 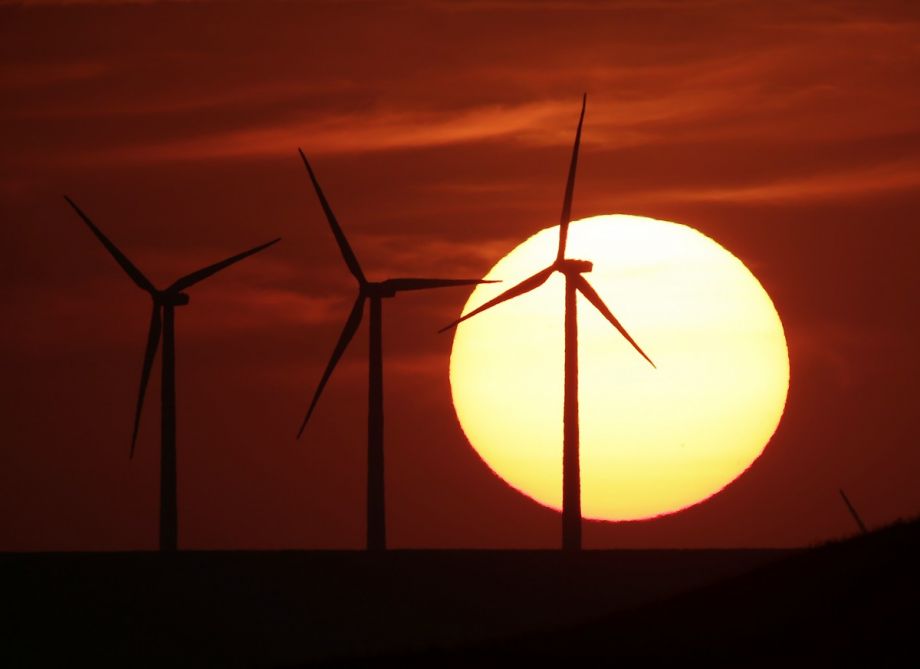 Mirroring Washington, Kansas’ Republican majority is fissuring over clean energy. The blustery state has quickly become a top wind producer, but a bill that would have killed its green energy laws came within three votes of passing the House earlier this year. With Wichita home to Koch Industries — whose many lobbying arms pushed the bill along — and environmental mega-donor Tom Steyer buying air time in the same city, newspapers have begun speculating that the coming elections will be a financial showdown between these polarized energy kings.

But despite stormy forecasts at the elected top, city utilities have spent the last half-decade steadily building their wind portfolios. According to a report released by the regulatory Kansas Corporation Commission, all six investor-owned utilities are on track to meet the state’s embattled mandates, requiring them to source 20 percent of their mix from renewables by 2020. And even a number of municipal utilities, which aren’t regulated or subject to the law, have agreed to add a comparable amount of clean energy.

In true red-state form, many utilities talk dollars and cents over environmental boons when outlining their mix.

Midwest began purchasing wind energy in 2007 — four years before the state regulations took effect. Morley estimates that its current wind, solar and hydro mix will allow Midwest to meet the targets for another three years, and the company is evaluating new sources. And even if the state mandates, known as the Renewable Portfolio Standard or RPS, were to be repealed, he says, Midwest has multi-year contracts with those providers.

“Any changes to Kansas’ RPS would have no impact on those agreements in place,” he writes.

David Mehlhaff of the Kansas City Board of Public Utilities echoes him. The municipal utility isn’t governed by the RPS, but a 20-year contract with OwnEnergy signed earlier this year will actually allow it to exceed the state laws, sourcing 22 percent of its mix from renewables. When asked how a repeal would have affected Kansas City BPU, Mehlhaff replies, simply, “It wouldn’t.”

“We do it voluntarily,” he says. “We’ve been doing it all along.”

Like Midwest, the utility signed its first contract with a wind farm before the state laws took effect.

“We just want to take advantage of the renewables that are available,” Mehlhaff says.

Kansas City Power and Light, the city’s regulated utility, was unable to answer detailed questions by press time. But a quick email from Courtney Hughly contains a similar statement.

“We currently meet and plan to continue to meet or exceed the renewable energy standards in Missouri and Kansas,” she writes (Kansas City spans both states). “[We] are taking steps to become more sustainable through Missouri’s most aggressive portfolio of energy efficiency programs.”

As a whole, Kansas’ energy mix is still more sooty black than green. According to the U.S. Energy Information Administration, 61 percent of the state’s net generation came from coal-fired electric power plants in 2013. But a startling 19 percent came from wind farms, fast-tracking nearly the entire state toward its projected goals. As of 2014, the American Wind Energy Association states that Kansas boasted 25 online wind farms, contributing an estimated $5.5 billion in capital investments and $7.9 million in land-lease payments to in-state coffers.

Those favoring a repeal listed rates as their primary motivation. A mailer circulated several weeks before the vote stated that renewable mandates could cause a hike of 27 percent (no source was listed for this specific figure). The regulating Kansas Corporation Commission, meanwhile, has reported rate increases of between 1.7 and 2 percent associated with renewable energy. And it’s been careful to outline that even these inflations aren’t exactly what they seem.

“The comparison of new wind generation to long-existing fossil fuel and nuclear generation, which has been significantly depreciated, places wind generation in the worst possible light,” the report from 2012 states.

Capitalizing on Obama’s unpopularity in the Sunflower State — he carried only four counties in 2008 and three in 2012 — an ad launched in January by the Kochs’ Americans for Prosperity compared the RPS to the President’s health care policy. (“Like Obamacare, it’s another government mandate we can’t afford.”) But ironically the Kansas Corporation Commission states that coal, subject to ever more scrutiny by that unpopular administration, could become a bigger financial drain.

Despite the state’s uptick in farms, lines and other infrastructure still need to be constructed for the rural parts of Kansas where wind farms are being built. But a much-touted survey reported in January that 90 percent of Kansans favor renewable energy, even if it adds a small amount to their bills. The survey was funded by advocacy groups and conducted by phone to only 600 residents, so it should be taken with a spoonful of salt.

Still, a network of funders and backers connected to national fossil-fuel lobbyists beg the question: Would a repeal really have been in the best interest of Kansas’ ratepayers or a select few elsewhere? For now state law stands, despite a reported $300,000 campaign against it. And utilities across windy Kansas will keep meeting and besting it until — and probably even if — it gets repealed.