How Will Kansas City Run Its Plugged-In, Sensor-Filled Future? – Next City

How Will Kansas City Run Its Plugged-In, Sensor-Filled Future? 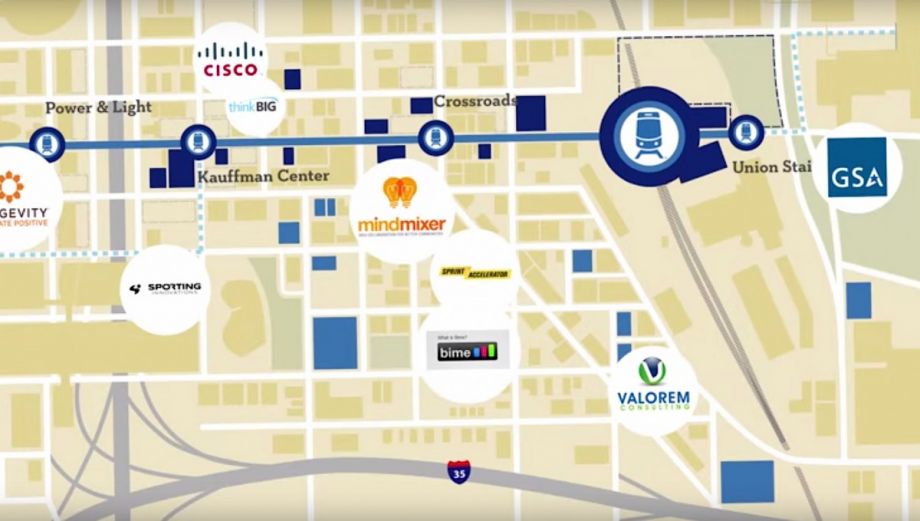 It hardly feels correct to call the Kansas City streetcar, a two-mile route that will open in the spring of 2016, a transit project. Sure, the streetcar will move people. But it will also be the spine of a body of sensors, screens and wireless Internet that together make up Kansas City’s “smart city,” North America’s largest such project.

Future straphangers, walking at night, will watch as lights brighten at their arrival and fade behind them. A network of digital kiosks will serve as portals to listings for local businesses, events, maps and transit arrival times. CityPost, the maker of those kiosks, will broadcast information to smartphone users in the vicinity — over a municipal WiFi network built and run by Sprint. Parking spot sensors will funnel information about empty spaces to an app for drivers. Cameras mounted on lampposts will send tram drivers warnings about obstacles on the tracks.

Welcome to the future, as envisioned by the technology systems giant Cisco: a public sector Internet of Everything. After working on such “smart city” prototypes as New Songdo City, South Korea, the San Jose company has followed Google into Kansas City, Missouri. Famous for blues and barbecue, K.C. has established itself as an open city for technological experimentation and public-private partnerships — and a test case for the hopes and concerns about life in a computerized, corporate-run urban environment.

At the project’s core are two groups of sensors. The first is a network of 200 cameras mounted on lampposts. Their primary purpose is to adjust light levels to nearby motion. But, as Joel Vincent, head of marketing at Sensity, which supplies this technology, explained to me, their software can be adjusted to measure any number of things — like whether cars are stopped on the streetcar tracks. “That’s the advantage of the Kansas City video sensor system. While today it’s used to do the traffic violation study, the same setup, the same structure, can also provide data on other things.” (The cameras don’t record footage. They perform these analytics in real-time.)

“We are using lighting and light poles as a Trojan Horse to provide real-time information about the community at large,” says Cliff Thomas, the managing director for Cisco’s Smart+Connected City project. Together with sensors in the pavement, this grid will keep watch on the territory around the Kansas City streetcar. Down the road, the city envisions additional sensor rollouts to monitor systems like water and trash.

KCnext, a trade association for the tech industry in Kansas City, is trying to attract firms and startups to the city to work with that data. “One of the key issues with making this trend become reality is that it’s very expensive to deploy this technology,” says Ryan Weber, president of KCnext. “Here, in one fell swoop, you’ll be able to test your technology in a very large laboratory, as well as having access to the key players installing that technology.” Weber says the project, which is still months away from completion, has already attracted the attention of various potential partners, like a weather company.

ThinkBig, a local startup incubator, will operate a program called “Living Lab” designed to help entrepreneurs who want to work with that data. The company hopes to accelerate the commercialization of the Internet of Things, turning the city’s data into new businesses.

The cost of the project to K.C. has been small. Of the $15 million total investment (not including streetcar construction), the city will pay $3.7 million. But even if K.C. proves to have negotiated good deals with its corporate partners, the project will be subject to scrutiny from “smart city” critics.

Writers like Adam Greenfield, reporting on the team of corporations (IBM, Siemens, Cisco) that shepherd these projects into reality, allege that “smart cities” aren’t the apolitical triumph they are made out to be. There are casualties of efficiency too: Parking sensors that ostensibly advance consumer convenience can also be used for enforcement. The same cameras that warn trams of pedestrians can alert authorities to the presence of the homeless. Systems evolve. Rio de Janeiro’s IBM-designed control center, writes Anthony Townsend in his book Smart Cities, “began as a tool to predict rain and manage flood response [but has] morphed into a high-precision control panel for the entire city.”

What kind of system will emerge in Kansas City? What revenue-generating opportunities will the city and its corporate partners find that the network offers? And which will be politically palatable? Much of what will define the Kansas City Smart City experience, to the average resident, worker or visitor, hasn’t yet been figured out. The digital kiosks, for example, will probably be the most visible feature of the project. But the city doesn’t yet know exactly what kind of information or advertisements they will show, or how access to that new medium will be distributed or sold. Nor what companies will hammer out new models for putting big data into the service of consumers. Nor what uses of the city’s data will be permitted.

For now, in Kansas City, those uncertainties represent the possibility of being a pioneer. “It will help us with the efficiency side, which is probably the most important part for us as a city,” says Chris Hernandez, the city’s director of communications. On the other hand, he predicted, “it’s going to create things we have not yet even imagined.”