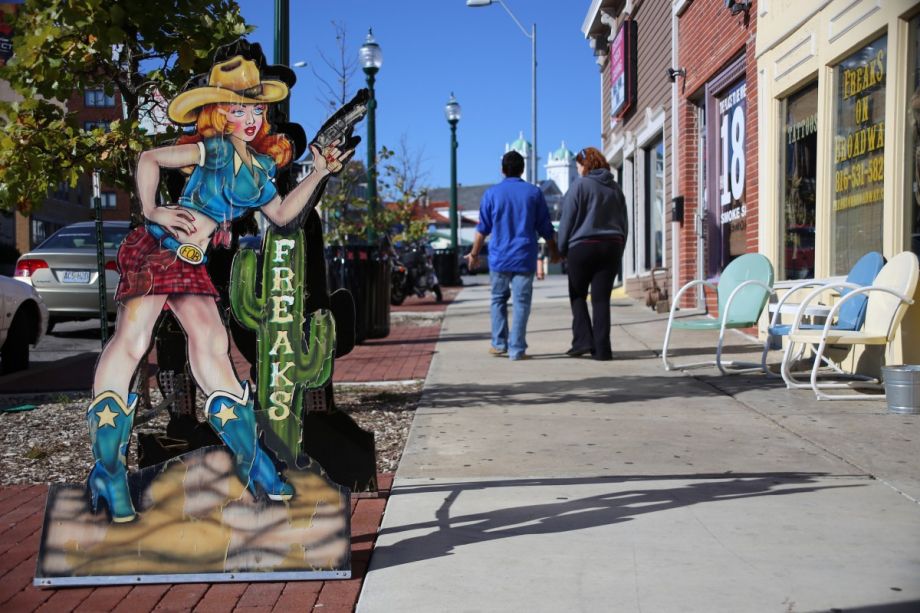 In Kansas City, Missouri, the Westport neighborhood fills up on weekends like nowhere else in town. Young people dine at trendy restaurants like Char Bar and drink at local institutions like Kelly’s and Harpo’s, the nights not ending until closing time at 3 a.m. Outside, where Westport Road intersects with Pennsylvania Avenue four miles from downtown, hundreds of more people gather on the sidewalks, eating from food trucks, waiting for Uber rides and, sometimes, getting into fights.

These violent altercations have long bothered city and law enforcement officials, who’ve sought remedies for decades. Their latest solution is drastic: Kansas City’s city council, after months of debate, voted 8-5 in late December to give control of sidewalks in Westport’s core to the Westport Community Improvement District, citing concerns over increased gun violence. In the spring, private personnel are set to begin using metal detectors or wands to screen visitors who wish to enter the area on Friday and Saturday nights between 11 p.m. and 4 a.m. and for special events.

Las Vegas and New York have sold public sidewalks to private owners for economic purposes and business improvement districts handle cleaning and security on public grounds throughout the country. But this is different. Kansas City’s decision to hand over sidewalks in an effort to prevent crime is unprecedented. The move has placated neighbors concerned with gun violence but prompted backlash from urbanists and civil rights activists concerned with the potential for racial profiling and cities becoming more exclusive.

“It may be one of the biggest contradictions in urbanism right now,” said Renia Ehrenfeucht, University of New Mexico professor and co-author of Sidewalks: Conflict and Negotiation in Public Space. “Everybody wants vibrant public spaces but at the same time wants a significant amount of control over them.”

Supporters have pointed toward another bill, from state legislators in Jefferson City, as reasoning for privatizing the sidewalks. In 2017, Missouri began allowing concealed carry without a permit, per Senate Bill 656. The change in law coincided with a series of high-profile incidents of gun violence in Westport.

The Westport Regional Business League, which pushed for sidewalk privatization, counted 65 gun-related incidents in the district the first 10 months of 2017, up from 16 in all of 2016. One incident, last July, involved a man shooting into a crowd outside the bars, leading police to shut down every establishment early. It was the first time they’d done so in a decade.

“The increase happened when the state of Missouri loosened the gun laws,” said Tom Platt, who favors the bill and is president of the Heart of Westport Neighborhood Association. “I personally was down in Jefferson City last September and said, ‘Can we do something?’ They just kind of laughed in my face when I said we’ve got a problem in Westport.

“It’s basically a lot of these Republican representatives that live in small towns, and they have to listen to their constituents that are in favor of having all of these guns and being able to carry them.”

Yet opponents express skepticism of the gun violence motive. After all, this isn’t the first time Westport business owners lobbied for privatization. In 2001, City Council considered a plan that would have privatized parts of two streets in the same area (the original version of this recent bill included streets in addition to sidewalks). Businesses wanted to use private security to check people’s ID’s and possibly charge $1 or $2 to enter the area. With private sidewalks, the Westport Community Improvement District could now do the same, given it routinely applies for a permit on weekend nights during the summer allowing it to temporarily close streets to traffic.

“That alone we feel is problematic,” said Eric Bunch, policy director for BikeWalkKC. “You’re charging people access to what was a public space.”

The bigger concern for many opponents is race. At hearings for the bill, the local chapter of the NAACP warned against the possibility of profiling. Typical patrons inside Westport’s bars are white. A much larger percentage of the crowds outside are black. Kansas City entertainment areas have faced discrimination lawsuits before, and Missouri’s racial atmosphere is among the most hostile in the country.

Last year, state legislators passed Senate Bill 43, which requires fired employees alleging discrimination to meet a much higher burden to win in court. The NAACP responded by issuing its first ever travel advisory directed at a U.S. state, warning black and Latino communities to stay away from Missouri.

“I think SB 43 and this whole atmosphere creates laws like this,” said Rev. Rodney E. Williams, president of the Kansas City NAACP chapter. “You have SB 43 in the wings and you have this. We don’t like the way things are going. We think this might make it worse in Kansas City.”

He said the NAACP will meet in the coming weeks to consider challenges to the new measure.

The bill forces the Westport Community Improvement District to hire civil rights observers to be stationed at the security screening points, and the city can regain possession of the sidewalks if violations occur.

Ehrenfeucht suspects other cities will be watching Kansas City and possibly replicating the move if it proves successful. She opposes sidewalk privatization for many reasons, not the least of which is doubt over its crime prevention efficacy.

“You might move some of the violence but you’re not going to limit it from this,” she said. “I think these public space controls are actions people like to take because it feels tangible.”

Westport certainly will feel different. Platt compared getting into the new Westport to getting into government buildings and local stadiums.

“It’s not going to be any different,” he said, “than when you go out to Kauffman or Arrowhead [stadiums] to watch a ball game.”