The Urban Designer Who Never Stops – Next City

The Urban Designer Who Never Stops 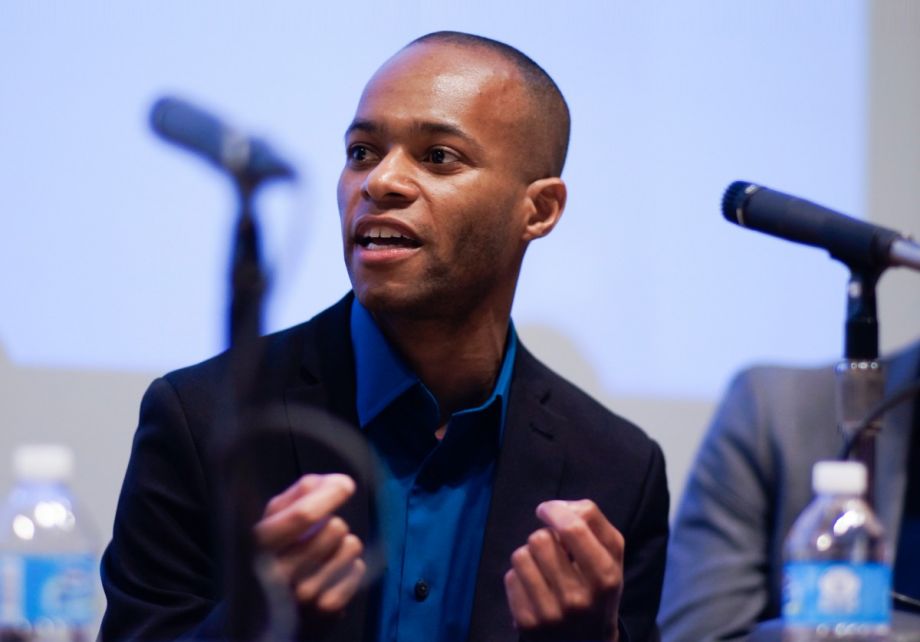 Next City isn’t just a news website, we are a nonprofit organization with a mission to inspire social, economic and environmental change in cities. Part of how we do that is by connecting our readers to urban changemakers and holding an annual Vanguard conference bringing together 40 top young urban leaders. Justin Garrett Moore is a member of the 2014 Vanguard class.

I get to work by: walk and subway
The area I grew up is: city

What was your first job? Technically, my first job was as a paperboy for the Indianapolis News, but my first real, meaningful job was at age 14 as an intern for CSO Architects in Indianapolis. The firm was contracted to design a gymnasium addition to my high school, Arlington High School, and Jimmy Beard, a MBWE general contractor on the project, convinced one of the principals at CSO, Jim Schellinger, to hire two interns from the school to work at the firm for the summer. It was a great experience and we learned first-hand about the multiple facets of the design professions. Today, almost 20 years later, both of us — black males from an underperforming inner-city public high school — have careers in the planning and design professions, a field that is marked by a structural and persistent lack of diversity. Someone really should replicate what Jimmy and Jim did on a much larger scale.

What is your favorite city and why? My adopted home, New York, is my favorite; and my joke nickname for it is “civilization.” I moved here in 2001 for graduate school and have since seen the city change and adapt in so many ways. It is the most dynamic and resilient place that I know. I learn and experience something new here just about every day. I have a long list of second choices: Chicago, Barcelona, Melbourne, and most recently, Cape Town, though the racism in South Africa is hard to overlook.

What do you do when you are not working? It is a problem, but I work when I am not working because I basically have three parallel careers: working in government at NYC Planning, in academia teaching at Columbia GSAPP, and with a family-run social enterprise, Urban Patch. The last “break” I had was to work on the Indy 2020 CityCorps Fellowship to develop an urban planning and design proposal for my home city of Indianapolis. And my “vacations” usually come in two forms: weddings and conferences. Other than that, I suppose I do the typical things: time with friends, cultural events and popular entertainment. I do like travel when I have time to get away, but everyone who knows me knows that I mostly enjoy spending my time (and money) locally in my Harlem neighborhood.

Did you always want to be an urban designer? I always liked drawing and problems, so being an urban designer specifically, or urbanist generally, seems like a good fit. But I did begin in a traditional architecture and building design career path. So while I went to architecture school for seven years and would like to think I’m pretty good at architectural design, I am not an architect. But my fascination with cities, drawings, buildings and places from an early age has persisted into my adult and professional life.

What do you like most about your current job? I get to work on very different things every day. Some days are very technical, when I’m basically solving the math or logic problems that inform urban spaces or programs. Other days are almost philosophical, where I am thinking through policy questions, like how a certain neighborhood or piece of the city should be used, why, how, and for whom.

What is the coolest project you worked on? There are many great projects that I have worked on in the past decade at City Planning such as the Greenpoint and Williamsburg Waterfront, The BAM Cultural District, and Coney Island Plan, but the coolest would have to be my work on Hunter’s Point South, an entirely new waterfront neighborhood development in Queens that includes permanently affordable housing for a mix of incomes, a new park, street and bicycle network, and neighborhood commercial and community spaces. I was involved as the city’s lead urban designer on the early development of the plan and was responsible for the overall layout of the streets, building massing and program, and the open spaces. It is the coolest thing ever to fly in over New York City and to be able to point to a part of it and say “I designed that” with a certain degree of legible authorship that one doesn’t always get in the more collaborative roles in the urban design field.

What’s the best professional advice you have received? Shortly after finishing graduate school, the economy was rough, but I had a couple job offers. I had just finished a dual degree, one in architecture, one in urban design. So I basically had to decide whether to work in city government and as an urban designer, or at a private (corporate) architecture firm as an architect. My late mentor, Mojdeh Baratloo, encouraged me to work for the city and noted that I would get great exposure in the context of a rapidly changing city, and the job would allow me better security and other opportunities. She was right.

Who do you most admire? My family (John Sr., Joyce, John Jr., Jason, and my grandfathers, Albert A. Moore and Robert L. Edwards), architect and educator Mojdeh Baratloo. I will get in trouble with some of my more progressive friends and colleagues for saying so, but I also admire former Mayor Michael Bloomberg and some of the commissioners during his administration, Shaun Donovan (housing), Amanda Burden (planning), Janette Sadik-Khan (transportation).