Housing in Brief: Judge Orders LA to Provide Shelter for People Living Near Freeways – Next City 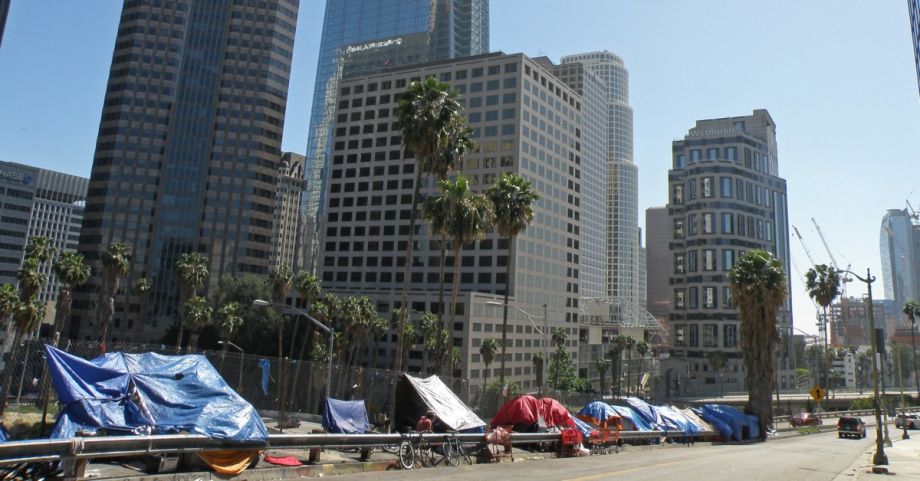 A federal judge ruled that officials in Los Angeles County must provide housing or shelter space for homeless people living near freeways, according to a report in the Los Angeles Times. The ruling would force officials to immediately create a plan to house 3,000 to 4,000 people “living near freeway overpasses, underpasses and ramps,” the report said. The ruling came in response to a lawsuit filed in March by the L.A. Alliance for Human Rights, which accused public agencies in the city and county of allowing unsafe conditions for people experiencing homelessness, the report said. The judge, David O. Carter, of the U.S. District Court for the Central District of California, took lawyers on a tour of Skid row in April to see the conditions that people were living in, according to reports. His ruling included guidelines for the type of shelter that the county must provide — incorporating social distancing guidelines, hygiene resources, nursing and security staff, notice of available housing, and an ability for people to retain all of their possessions, according to the report. Officials had not responded to the ruling by the time the LA Times published its report.

“Everyone’s committed to seeing this through,” Daniel Conway, a policy advisor with the L.A. Alliance for Human Rights, told the paper. “The challenge becomes, how high are we aiming here? Are we trying to meet thresholds for the sake of a legal settlement or are we trying to fundamentally change how we deal with homelessness?”

A bill introduced in the Chicago City Council this week would legalize accessory dwelling units on houses and vacant lots around the city, according to a post on Chicago Cityscape, a site that tracks development and construction data. If adopted, the bill would allow property owners to build “coach houses” — standalone residential units in the yards adjacent to residential buildings — or create “conversion units” by renovating existing space inside of buildings. Single-family homeowners could add one conversion unit, and multifamily property owners could add one conversion unit for every three existing units, according to the report. When property owners add more than two units to buildings, half the units would need to be rented at rates that are affordable to someone earning up to 60 percent of AMI, the report says.

Chicago Cityscape has also compiled a list of supporters of ADU legislation and a list of architecture firms that can design ADUs for interested homeowners. The measure will be considered in a joint hearing of the city council’s housing and zoning committees, according to the report.

The ADU ordinance in Chicago has been in the works for some time, as Curbed reported in February. As housing has become more costly, cities around the U.S. have begun legalizing privately built and owned ADUs as one small source of affordable housing.

After the initial round of Paycheck Protection Program loans were released, a number of large companies, including restaurant chains like Shake Shack and Ruth’s Chris Steakhouse, returned their loans under pressure from people who said the loans were supposed to be targeted at small businesses. Last week, according to a report in CBS local news in San Francisco, House Speaker Nancy Pelosi called on Veritas, a San Francisco-based landlord, to return its $3.6 million loan as well. The company is “one of the city’s largest corporate landlords,” according to the report.

“The Paycheck Protection Program is designed to be a lifeline to help vulnerable small businesses retain their workers and pay other expenses during the devastation of the coronavirus crisis,” Pelosi said, according to the report. “PPP loans should be directed first and foremost to the small businesses with the greatest need, particularly minority, women and veteran-owned businesses that are struggling. Larger companies like Veritas, one of San Francisco’s largest corporate real estate management firms, which has billions in assets and access to liquidity through other sources, were not the intended beneficiaries of PPP loans.”

The company defended itself, saying it is a property management firm and not a property owner, and that it has fewer than 200 employees. It said it would pay the loan back according to its terms, rather than return it immediately. The company has been the target of protests before. Last year, amid protests, it agreed to waive certain building improvement-related fees that it was requiring tenants to pay, according to a Curbed report. The New York Times also reported this week that only a small number of minority-owned businesses that applied for Paycheck Protection Program loans received them.