Signs of a Cargo Cult Urbanism – Next City

Signs of a Cargo Cult Urbanism 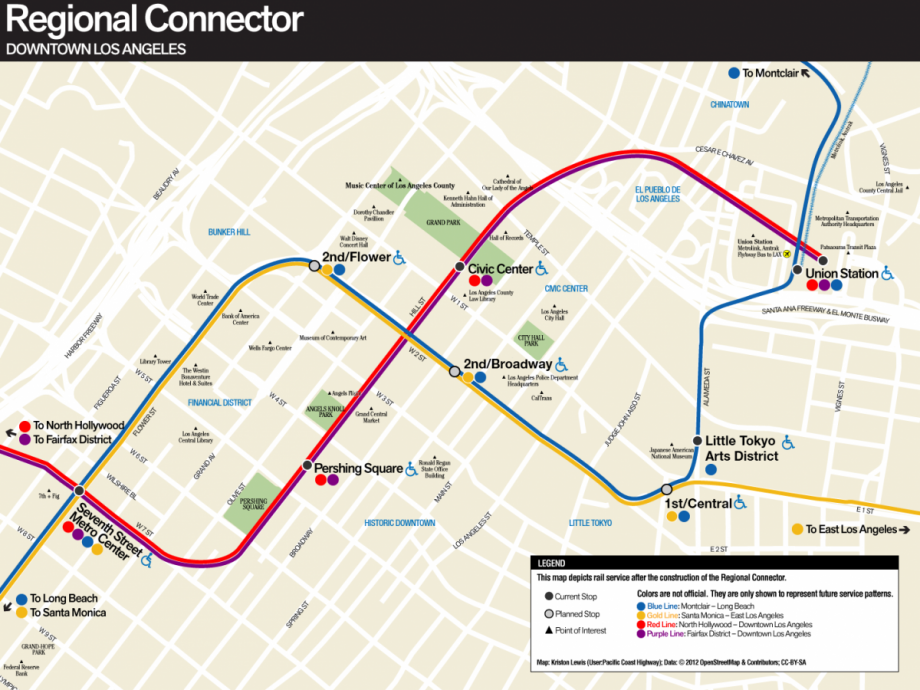 The transit project that Huizar should be stumping for instead. Credit: Kriston Lewis.

When it comes to urbanism, Downtown Los Angeles Councilman José Huizar has his heart in the right place – he loves skyscrapers, and wants more rail for his slice of the city.

But when it comes to specifics, Huizar has some whacky ideas that deserve serious scrutiny. For evidence, look no further than his recent bill to encourage skyscrapers in Downtown Los Angeles by prohibiting mid-rises and his curious belief in a mixed-traffic streetcar loop that would have no higher practical purpose beyond moving tourists and a smattering of commuters in a circle around downtown.

With the land use bill put forward in October, the councilman seems to be playing poster child for cargo cult urbanism that seems to mistake the trappings of good urban neighborhoods with their fundamentals

On the land use side of things, the bill does get some things right: DTLA should indeed ease or eliminate its minimum parking requirements — the city has made huge transit investments and parking drives up the cost of project, while also making streets less attractive. The area can too certainly handle more as-of-right development and denser hotels, as the bill directs the Department of City Planning to allow.

The restrictions on mid-rise buildings, though, is puzzling (not to mention that it makes it unlikely that his more rational moves towards increasing density will pass). Huizar’s logic on prohibiting less-than-tower apartment buildings is that these structures are eating up scare skyscraper plots, but blogger Let’s Go LA makes a convincing case that there are still plenty of surface lots that need building, and that the requirement is perhaps even counterproductive:

The high-rises? They’ll come naturally when the neighborhood becomes more desirable. We’re already seeing that in the more established parts of downtown. So if Huizar wants more skyscrapers downtown, he should make it easier to build mid-rises.

The good news here? Given the opposition of developers and Huizar’s sex scandal, the bill looks increasingly unlikely to ever become law.

Unfortunately, Huizar’s overeager urbanism also extends to transportation, and specifically his support for a mixed-traffic streetcar in Downtown Los Angeles. Its recent price hikes (turns out it could be more than $300 million for the four-mile loop, not the $125 million first promised, but Huizar is still rooting for it) notwithstanding, the project is of questionable value. Streetcars are normally sold on the basis of promoting economic development, but Downtown L.A. is booming, and it seems unlikely that the fate of the epicenter of America’s second-largest urban area is going to be determined in any way by a symbolic transit project that doesn’t increase mobility.

And transit-wise, the project is of course questionable. Downtown Los Angeles is already the region’s largest transit hub, with all but two of the city’s rapid transit lines converging on their neighborhood, and given the region’s size, very few people have commutes short enough to make the streetcar useful in and of itself. Streetcars could in theory act as downtown circulators (although no better than a bus), but the one-way loop route that L.A.‘s streetcar will take is next to useless for actually getting around, as Jarrett Walker explains:

Whenever someone proposes a one-way loop as the solution to their transit problem, especially downtown, I feel the need to take a deep breath and offer – in my most calming and supportive voice, as though speaking to someone standing on a ledge – this crucial bit of wisdom that it took me years of study to acquire: Very few people actually want to travel in circles.

He leaves open the possibility that one-way loops could be good for promoting tourism (“Managers of a city’s tourism industry, for example, don’t particularly want tourists to get where they’re going, but want instead to create an experience that will show them other places that they might not have intended to go, and that might even be used to tour the city and come back to where you began”), but for a city with as many transit need as L.A., building a purposefully-circuitous route for tourists seems like a poor use of scarce resources.

Instead, let me suggest diverting the money – and its associated federal funding requests – to another transit project to help circulation in Downtown Los Angeles: the Regional Connector, which duplicates much of the streetcar’s route anyway, and would have an impact beyond the neighborhood. The Regional Connector will fuse together the city’s light rail lines through a downtown tunnel, increasing access to Downtown Los Angeles – by giving riders coming from East L.A. access to the Financial District, and riders from Long Beach and Santa Monica access to Union Station – as well as increasing regional access, by giving riders easier transfers through downtown onto further destinations on the other side of the region.

It wouldn’t offer quite as granular of access throughout Downtown L.A. as the streetcar, which would stop every few blocks, but it would be a lot faster and infinitely more useful as transit. If José Huizar wants to really improve his district’s standing in the region, real transit is ultimately more important than cheap gimmicks like a mixed-traffic streetcar. And with a $1 billion funding gap, the Regional Connector could really use those hundreds of millions for the streetcar.