Fort Worth Rail Line to Airport on Track for 2018 Opening 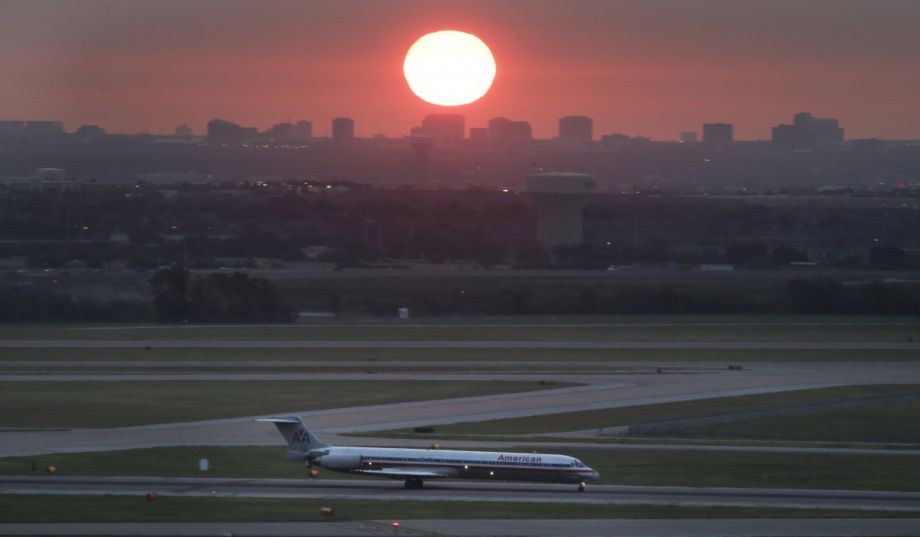 A jet taxis on a runway at the Dallas/Fort Worth International Airport. (AP Photo/LM Otero)

Forth Worth Gets Direct Rail Connection to Airport
Dallas-Fort Worth International Airport has been connected to downtown Dallas by DART light rail service since a station adjacent to Terminal A opened in 2014. As of now, the only rail transit option for Fort Worth residents is the Trinity Railway Express (TRE) commuter train between Dallas and Fort Worth, which connects to an airport shuttle bus at CentrePort station just south of the airport.

That will change in 2018 thanks to an agreement between the Fort Worth Transportation Authority (The T) and the airport.

As reported in Railway Gazette International, the June 30 agreement will bring the T’s planned TEX Rail commuter line into the airport proper, with stations at Airport North and adjacent to Terminal B. With the exception of the new trackage into the airport grounds, TEX Rail will use existing tracks between the airport and the Intermodal Transportation Center in downtown Fort Worth, where riders can connect to T and TRE service.

The airport will pick up the $40 million cost of the Terminal B station, which will be connected to the DART station at Terminal A by a walkway. The Airport North station will be built by FWTA as part of the overall $1 billion TEX Rail project. Service will be provided by eight Stadler Flirt3 DMU railcars, which will be assembled in the United States. The line is slated to open in late 2018; initial ridership is estimated at 10,000 passengers daily, rising to 18,000 daily riders by 2035.

A man walks next to a light-rail train on the first day it opened to the public in Jerusalem in 2011. (AP Photo/Nasser Shiyoukhi)

The 19.6-km (12.2-mile) line will run from Gilo in the city’s southwestern section to Ammunition Hill and Mount Scopus northeast of the city center. The line will cross the existing Red Line at Ammunition Hill and at Binyanei-Hauma in the city center, which will also be the terminus of the new A1 rail line to Tel Aviv. The Green Line will have 36 stations and is expected to carry 200,000 riders daily when it opens in 2024-25. The Jerusalem Transport Master Plan Team (JTMT) expects to solicit construction bids for the Green Line in the first quarter of 2017.

JTMT, which is modeled after a U.S. Metropolitan Planning Organization, is also proceeding with plans for a third light-rail line. The Blue Line will run from Ramot in the northwest via the city center to Gilo and Talpiot, with branches to Malkha and Mount Scopus. This line, which would be 23 km (14.3 miles) long and have 42 stations, is currently in the process of securing approvals. Once those are granted, a contractor should be selected in 2018, and the line should be open for service by 2025 as well.

L.A. Streetcar Project Presses On Amid Skepticism
As work proceeds beneath downtown Los Angeles on a new light-rail subway tunnel, up on the surface, backers of a modern streetcar line are continuing to push for its realization amid growing doubts about its cost and effectiveness.

Southern California Public Radio station KPCC reports that the Los Angeles Department of Transportation has just completed an environmental review of the proposed downtown streetcar that covers route options, traffic impacts and possible locations for a storage and maintenance facility.

The proposed line would operate along a four-mile-long, one-way loop connecting Bunker Hill and the Civic Center on the north with South Park and the Fashion District in the south, serving the Financial District, Jewelry District, L.A. Live! and the historic downtown core along the way. One possible routing would connect with the Metro Red, Blue and Purple lines directly at the Metro Center station at 7th and Flower streets. A possible spur from the northern end would provide service to Disney Concert Hall.

The streetcar’s proponents say the line would improve connectivity within downtown L.A., but critics point to its ballooning cost — originally projected to cost $125 million, current estimates put the price at $280 million — and likely slow speed due to liabilities. (As the cars will operate in mixed traffic, their speed could be as slow as 3.5 mph, not that much faster than walking.)

Furthermore, local officials haven’t yet figured out how to cover $200 million of that higher figure. And while the official timeline on the L.A. streetcar website calls for the line to begin service in 2020, KPCC reports that groundbreaking could take place as late as 2053.

Given the recent decision in neighboring Orange County to pull the plug on a planned streetcar connecting downtown Anaheim with Disneyland, the L.A. streetcar will face a rough ride going forward at best.