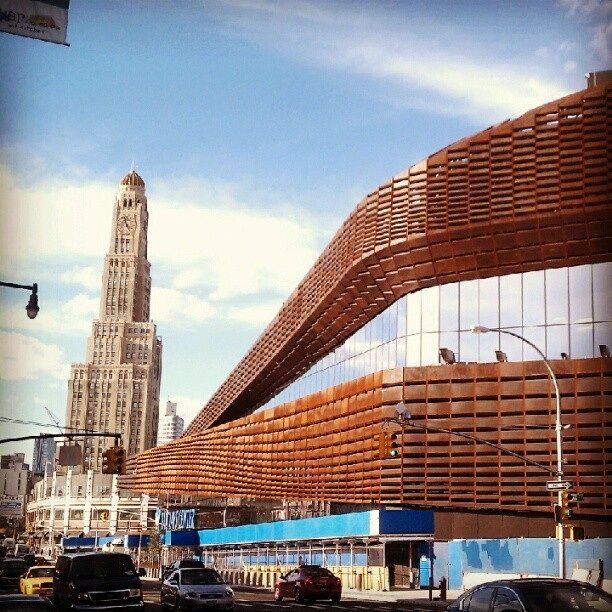 Barclays Center, the crown jewel of the $4.9 billion dollar Atlantic Yards redevelopment project in Brooklyn, will open tonight, bringing thousands of people to an area formerly known as a good place to score an apartment on a quiet street with decent rent and fantastic subway access.

The opening marks a new stage in a fierce battle between developer Forest City Ratner and a loose coalition of neighborhood organizations and advocacy groups opposed to the 18,200-seat home for Brooklyn’s new basketball team, The Nets, and its surrounding 16-tower ring.

Constructed at the formerly low-rise intersection of two of Brooklyn’s busiest corridors, Flatbush and Atlantic Avenues, the project has been a lightening rod in the debate over the borough’s future. With its large digital billboards and postmodern curves coated in finish meant to look like rust, the arena looks more Times Square than Park Slope. Residents, representing numerous neighborhoods from the surrounding area, have, since the project was announced in 2003, expressed concern that stadium will raise rents in the area while making it unlivable with Manhattan-level congestion.

“It’s the end of the community as we know it and the beginning of something new,” Michelle de la Uz, director of a non-profit housing organization in Brooklyn, told the New York Times. “What that ‘new’ is, we don’t yet understand.” (In an interesting twist that has created its own smaller firestorm of controversy, Forest City Ratner also built the Times’ headquarters in Midtown Manhattan.)

In a bid to win over opponents, Forest City Ratner, soon after the project’s inception, signed a Community Benefits Agreement, promising that 50 percent of the residential units built within Atlantic Yard’s 22 acres would be rented or sold at affordable rates. For those still waiting for those as-yet-to-be-started-on units, the independent compliance monitor intended to enforce the 2005 agreement still hasn’t been hired, WNYC reported Friday.

Additionally, the first apartment building expected to break ground this fall will not contain the number of housing for lower-income families that advocates had been led to expect. Just nine of the 35 subsidized two-bedroom units in the 32-story, 363-unit building will go to families earning incomes below $35,856, while the rest of the promised affordable units will be geared to middle-class families, not low-income ones, with rents more than $2,700 a month, watchdog journalist and blogger Norman Oder of the Atlantic Yards Report blog reported in an article for Brooklyn Bureau.

All this is fodder for the next phase of what has already been nearly-decade-long exchange of court affidavits and public relations slams. Saturday, Families United for Racial and Economic Equality (FUREE), a non-profit organization made up largely of women of color advocating on behalf of low-income families, will lead a march to the arena. The march will protest Forest City Ratner’s failure to deliver promised jobs and affordable housing.

“We need to fight back and fight together, not against each other,” Sharif Barnes, a FUREE board member, said in a release from the group.