Why Japan’s Tsunami Was Harder on Women – Next City

Why Japan’s Tsunami Was Harder on Women 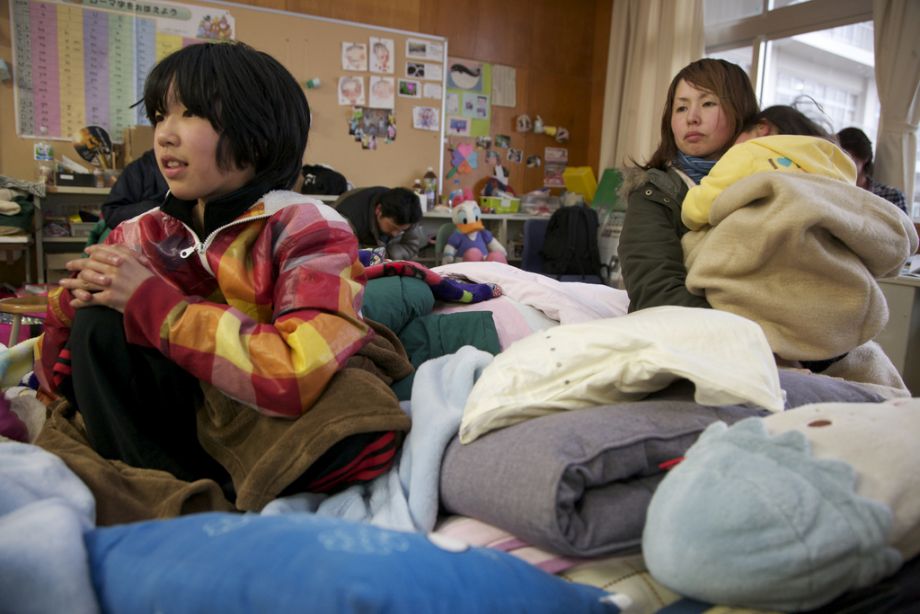 A family in a shelter in Japan after the 2011 tsunami. Photo credit: Save the Children Canada via Flickr

Misogyny is so deeply rooted in Japanese culture it’s almost invisible. But, reports Akiko Domoto, an environmentalist, feminist and former governor of Tokyo’s neighboring Chiba Prefectures, “In times of disaster, male-centric attitudes and discriminatory practices come glaringly to the surface.”

In Tokyo, women and disasters have a long and troubled history. About a month after the 1923 Kanto earthquake, a manga magazine featured an illustration of a monstrous catfish (which cause earthquakes, in Japanese folklore) ripping a colorful kimono from a terrified woman. The words shitsujitsu gōken (fortitude and earnestness) were printed on the woman’s scarf, but by ripping off her kimono the catfish had revealed another set of words on the inside of her coat: kyoei kyoshoku (vanity and ostentation).

The illustration reflected fears in Japan of a new kind of female hedonism, one that challenged millennia of male hegemony. So how far have we come, 90 years later? Japan’s last two great disasters — the Kobe Earthquake in 1995 and the Great East Japan Earthquake in 2011 — proved that the issues facing women have changed significantly. They’re no longer blamed for disasters, they’re simply not included in the relief process.

During a fact-finding trip to areas affected by the 2011 tsunami, Domoto and her team found that those “in charge of a shelter in Minamisoma would not let the evacuees put up dividers. This meant there was no place for women to change, for infants to nurse or for the elderly to change their diapers.” In addition to a lack of privacy in shelters, there was also a lack of basic women’s goods and an expectation that women would help with reconstruction by spending their days in the shelters, cooking. The idea that women might have wanted to contribute to the rebuilding of their city or town in other ways was not considered.

This was also the case following the Kobe quake. Women in shelters complained of a profound lack of understanding in terms of their basic needs: privacy, safety and sanitary goods. During the months they lived in shelters many were forced to change their clothes under blankets or in bathrooms. A 2012 presentation by disaster researcher Yoko Saito highlighted these points and stressed that these conditions delay a return to normalcy as “women’s burden increase in a shelter.”

Demoto wrote in a 2012 report that the essential problem is “a male-centered mindset that prioritizes physical infrastructure and institutional expediency at the expense of social infrastructure and the actual needs of people – women in particular.” A survey completed by the Gender Equality Bureau in the same year found that in the three prefectures affected most by the tsunami in 2011 — Iwate, Miyagi and Fukushima — women made up only around four percent of leaders in charge of designing and operating emergency shelters, 11 percent of the experts brought in to provide technical support for rebuilding and 4.5 percent of those sitting on Regional Disaster Management Councils across Japan.

Surprisingly, in 2004, when Japan’s Basic Disaster Management Plan was amended, it actually had a small “gender perspective” section written into it. A year later, the government’s Basic Plan for Gender Equality Promotion also incorporated a section on disaster prevention. This was progress, but the 2011 tsunami and earthquake showed that little had really been learned.

The problem is that, in Japan, sexist values are so embedded that overcoming them will take more than policy change, and the country has been criticized for making only superficial tweaks at a governmental level. According to the 2011 report “Humanitarian Response Index 2011: Addressing the Gender Challenge,” Japan was cited for its “failure to integrate gender issues into programming,” and for addressing these problems only on the surface.

To combat this, after 2011 the Japan Women’s Network for Disaster Risk Reduction was formed — a network of women’s organizations and influential individuals such as Domoto. They have been actively petitioning the government to add a more accurate gender perspective into disaster policy. Demoto and other integral members of the Women’s Network visited Margareta Wahlström, chief of the United Nations Office for Disaster Risk Reduction, in Kobe in 2012, to stress the importance of woman leaders in the “planning and implementation of disaster risk reduction.” And in April, the Women’s Network for the East Japan Disaster (Rise Together), based in Tokyo, produced a guide of their own: “A collection of good practices in disaster response based on east Japan disaster.”

The changes these women are tirelessly working toward would have been unimaginable in 1923. Even today what they’re doing sounds radical, but in fact, it’s very basic. They simply want women involved in disaster prevention planning. What’s shocking is the fact that this need hasn’t really been addressed before, and how deeply rooted the single-gender perspective is in Japan.