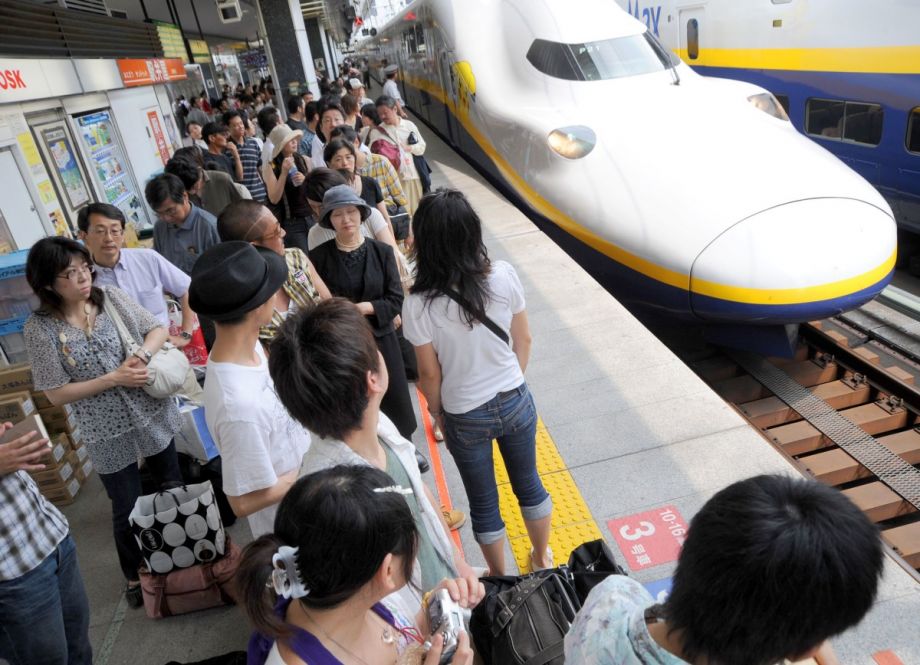 Half a century ago, Japan built the world’s first high-speed rail network — a network that remains the gold standard in train travel today. In this week’s Forefront, Next City examines how that country is now helping Texas build its own bullet train, a potential game-changer for transportation in the Lone Star State.

When it launched on October 1, 1964, the world’s first high-speed rail network was known as yume no chotokkyu — literally, the “super-express of dreams.” The first line in Japan’s now world-famous shinkansen network, which would come to be known as the “bullet train,” was built against all odds, in the face of fierce public opposition, technical difficulties and astronomical costs. The $80 million loan secured from the World Bank for construction and engineering barely covered expenses, and the head of the project, Shinji Sogō, resigned amid the scandal of an out-of-control budget. People called the team who worked on the project “the crazy gang.”

But when it pulled out of Tokyo Station 50 years ago, the much-maligned bullet train accelerated a process of change that would transform Japan’s cities, geography and identity. After the devastation of World War 2, “The shinkansen was the symbol that Japan had not only caught up, but, in terms of railway technology at least, in 1964 had overtaken the rest of the world,” writes Christopher P. Hood in Shinkansen: From Bullet Train to Symbol of Modern Japan. It was more than just a train. The 0 Series shinkansen, painted gleaming white with a blue stripe running its length, became an early symbol of the technological ascension Japan would display through the rest of the 20th century.

Today, over 350,000 annual trips transport tens of millions of passengers all over Japan with sublime efficiency — the average delay time is less than a minute. A research report titled “30 Years of High-Speed Railways: Features and Economic and Social Effects of The Shinkansen” by Hiroshi Okada, estimates that the economic impact from the shinkansen train network, based on the time saved from faster travel, is approximately ¥500 billion ($4.8 billion USD) per year. Okada stresses that the cultural impact is also significant, a shinkansen offers people living far from urban centers “easy access to concerts, exhibitions, theaters, etc., enabling them to lead fuller lives.”

Half a century ago, however, the system was far humbler. In 1964, the first track was the Tokaido Line, a 320-mile-long link between Tokyo and Osaka that reduced the trip from six-and-a-half hours (on conventional trains) to three hours and 10 minutes, traveling at a maximum speed of 200 miles per hour. Although a one-day round trip between the two major cities was possible before, the shinkansen made it useful. For the first time, workers could get to meetings in one city during the day and be back home drinking an Asahi in the local izakaya that night. (That Asahi likely wouldn’t have been their first of the day — drinking beer and riding the shinkansen go hand-in-hand, to the point that Japanese beer companies produce special commemorative cans for the trains’ anniversaries.)

The train expanded mobility profoundly, pulling people from rural areas to the Tokaido Line. Businesses converged around the major stops as a growing emphasis on productivity swept across Japan. Today, the shinkansen network has 1,487 miles of track, with more set to open in the coming years. All along the shinkansen tracks between Tokyo and the southern city of Fukuoka is now an almost unbroken stretch of cities and towns that didn’t exist in 1964.

It seems that everything the shinkansen touches turns to city, and regions that are off the beaten track, so to speak, benefit greatly from the economic jumpstart brought by the train. When the Hokuriku Shinkansen was opened, it halved the travel time between Tokyo and Nagano, and the number of rail passengers grew by 40 percent. When the shinkansen was introduced between Tokyo and Hachinohe, ridership increased by 60 percent. In one exceptional case the number of riders on a new segment of the Kyushu line increased by 240 percent. New shinkansen lines are often proceeded by aggressive marketing campaigns promoting tourism in those areas, a strategy that seems to work.

But the changes that the first shinkansen heralded — a modern era built on innovative engineering and design — now, to some degree, feels like the distant past in Japan. In 2014, the Far East archipelago is saddled with a troubled economy, struggling rural areas and an aging population. Can a high-speed train solve those problems, too?

The Council for Transport Policy has a plan, known as the One-Day Travel Initiative. It’s goal: regardless of where you are in Japan, it should only take you three hours to get to the nearest major regional city (Tokyo, Osaka, Nagoya, Sapporo or Fukuoka). Thanks to the shinkansen, this goal has almost been achieved. The planned impact of this hyper-mobility is to stem the tide of migration toward hungry urban centers, like Tokyo, and encourage decentralization.

New trains are being developed, such as the Maglev, which could further reduce travel times between Tokyo and Osaka — the original shinkansen route — to a single hour. You can picture the marketing materials: “Why live in an expensive, crowded city when you could have a house in the country and commute to work each morning, then enjoy a beer all the way home on the super-express of dreams.”