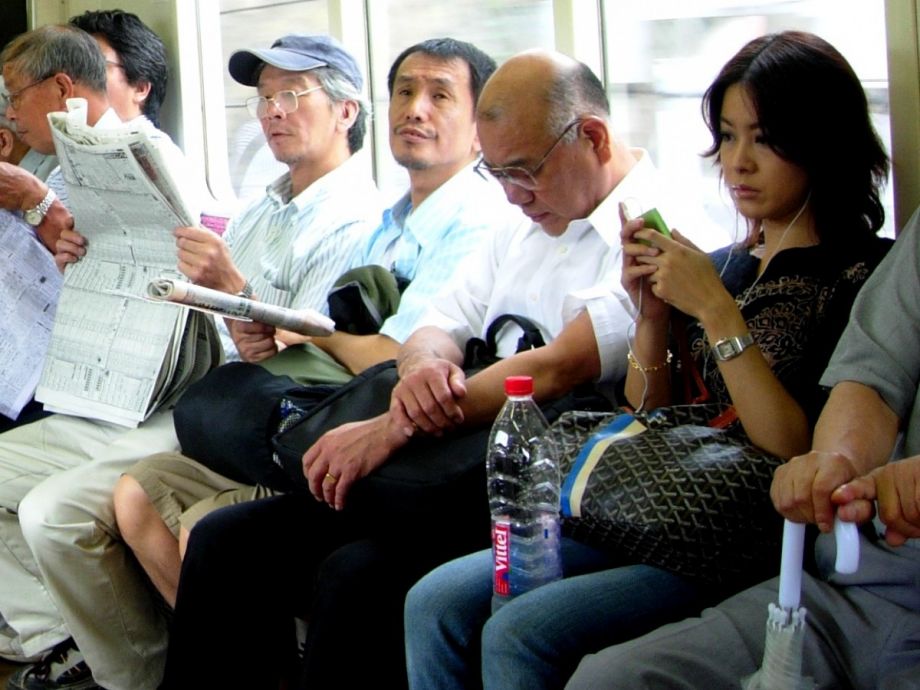 Dressed down on the commute to work in Tokyo. Photo credit: Gustavo Verissimo via Flickr

Fashion-conscious Tokyo has eliminated millions of tons of carbon dioxide while simultaneously giving the stoic salaryman some much-needed tropical flair.

It sounds like a joke, but it isn’t. In 2005, Yuriko Koike, head of the Ministry of the Environment (MOE), declared war on the business suit — at least during the warmer months. She encouraged businessmen to forego suit jackets and ties during high summer so that office air conditioners could be set at a balmy 28 degrees celsius (82 fahrenheit). She called the initiative “Cool Biz.”

Ten years later, Cool Biz is still up and running, and has prevented millions of tons of carbon dioxide from escaping into the atmosphere. The Ministry of the Environment estimated that in its first year alone, the campaign resulted in a 460,000-ton reduction in CO2 emissions — equivalent to the power used by about one million households over the course of a month. In 2006, it estimated, that reduction more than doubled. If that data is accurate, Cool Biz is one of the most impactful environmental success stories the Japanese government has implemented.

It’s a big improvement over Japan’s previous fashion-oriented conservation effort, spurred by the Ayatollah Khomeini’s rise to power in Iran in 1979. The protests that rocked Tehran that year sent oil prices skyrocketing, so to cut down on energy use, the Tokyo government proposed a new business jacket: a regular suit jacket with the sleeves cut off. It was, perhaps, one of the most unfashionable suits ever created.

“It was a complete failure. I don’t think there are any photos of it online” says Katsue Edo, associate professor at Bunka Gakuin University’s Department of Fashion Sociology and Sciences. “Former Prime Minister Tsutomu Nada tried to promote it as an eco-suit, but it wasn’t accepted.”

Cool Biz has been vastly more successful than the short-sleeve jacket ever was, but it still takes a yearly effort to combat Japan’s strange obsession with the traditional business suit. Edo says wearing a suit to work, even during Tokyo’s steamy summer months, has a history that stretches back to the early 19th century Meiji Period. According to a 2008 book titled Mono to Otoko no Sengoshi (Postwar History of Items and Men), one of the main reasons the suit has dominated all other styles of business attire is that individual fashion styles disturb order.

The government has stayed the course, however. Minister Koike went so a far as to forbid anyone wearing a tie or jacket to enter the offices of the Ministry of the Environment from June and September.

Edo discovered this using an experimental method of marketing research he calls “picture mining,” which basically involves cataloging and coding archives of photos of men wearing Cool Biz attire. In one unpublished research report, Edo and his team found an increase in the number of brown belts, form-fitting button-down shirts and slimmer pants. Cool Biz was turning Tokyo men into better dressers.

“That’s a nice thing for the fashion industry,” says Edo. Indeed, certain sectors of the apparel industry have profited from the campaign. For example, fast-fashion retailer Uniqlo heavily promotes “Cool Biz” wear in the lead up to the summer months. (The necktie industry hasn’t been so happy — it reportedly lobbied the government to end Cool Biz when its sales dropped by one-third.)

Following the energy crisis caused by last year’s tsunami and earthquake, Cool Biz was expanded in an even bigger campaign called Super Cool Biz. The basic foundation was the same — no suits from May through October — but with a little added pizazz: during the peak summer months, workers were encouraged to go wild, and dress in anything from sandals to Hawaiian shirts. The results have been spectacular: it’s estimated that Japan reduced its carbon emissions by 1.56 million tons in the 2011 financial year, thanks to the Super Cool Biz campaign.

Edo predicts that jackets will make a comeback this year, as people react to the dressed-down extremes promoted by the Super Cool Biz campaign. (Even Koike complained that the looks were getting too casual.) And Edo himself confesses that he sometimes brings his jacket and tie to work in a bag.

“I put them on if I have a meeting where the other person is wearing them,” he says. “It’s expected.”