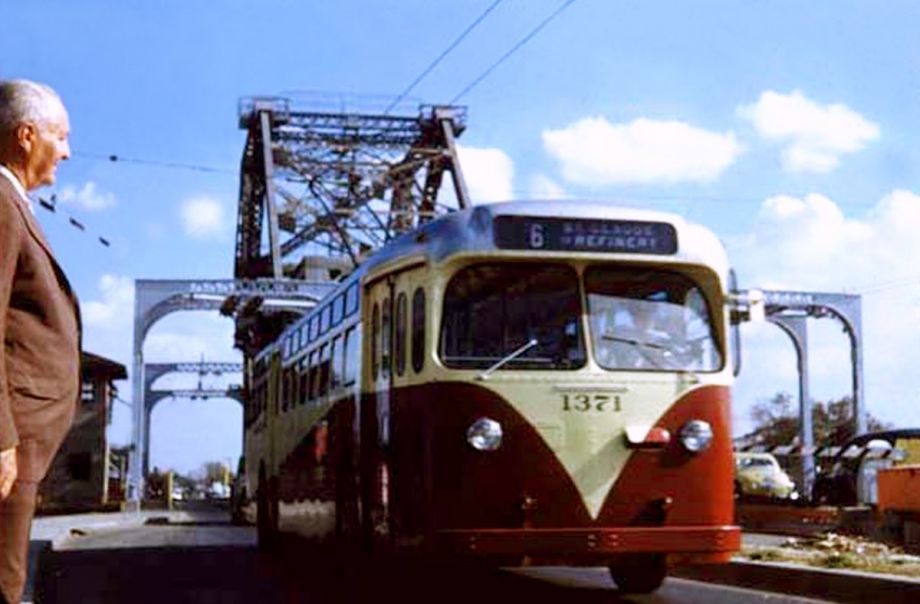 New Orleans’ trolley bus system, above, closed in 1967, but cities in the Indianapolis region hope a proposed “rail on tires” will give them an edge in attracting younger residents. (Source: Team New Orleans, US Army Corps of Engineers)

Jakarta Adds Light Metro to (Perhaps Overly) Ambitious Construction Program
Officials in the Indonesian capital of Jakarta are apparently in a hurry to get the infrastructure in place to shuttle visitors around the city during the 2018 Asian Games. The city is already at work on six new toll roads, a redevelopment project in the city’s Old Town, and the first of two planned Mass Rapid Transit (MRT) metro lines. (The initial north-south line was to be built in two phases, with the first phase opening in 2018 and the second in 2020, but the timetable for both phases has been pushed ahead by the Jakarta provincial government; the first phase is now set to open in 2017 and the second the following year.)

Now, the Jakarta Post reports, the city is adding a light rail transit line to the job list.

Jakarta Deputy Governor Basuki “Ahok” Tjahaja Purnama told the Post that the city hopes to begin construction of the elevated LRT line next year — and finish it in one to two years, also in time for the Asian Games.

The LRT route, which may or may not replace a monorail system on which work has stalled, is intended to be a feeder to the MRT as well as connect with stations on the commuter rail system and the Transjakarta bus rapid transit network.

Some experts the Post spoke to were doubtful that the city could build the LRT line in two years — or finish all of the projects it has underway in such a short time. Emanuel Kristanto, head of land transportation for the Jakarta Transportation Agency, said it would take three years to complete the LRT, and Darmaningtyas, director of the Institute for Transportation Studies, told the paper, “There are too many ongoing infrastructure projects in Jakarta at the moment. The city administration should focus on finishing these ongoing projects instead of starting a new one.”

Published reports so far include no cost figures for the new line; Ahok told the Post that its cost would be covered entirely by the consortium building it. The Japanese-led consortium in charge of building the MRT metro is financing it with a loan of 125 billion yen ($1.14 billion U.S.), 49 percent of which will be paid by the Indonesian national government and 51 percent by the Jakarta city government.

Hong Kong Lays Out Blueprint for Further Rail Transit Expansion
While pro-democracy protests roil the streets of Hong Kong, the regional government is pressing ahead with underground movements. The International Railway Journal reports that Hong Kong’s Transport and Housing Bureau has released a roadmap for further expansion of the city’s Mass Transit Railway system over the next 17 years.

The proposal would add another seven lines and extensions to the 218-km system, which is already in the midst of an expansion project that will add five new lines and extensions by 2021. The proposed additions would include a new line linking three existing lines on the northern mainland, a new East Kowloon Line, a new line on the north shore of Hong Kong Island and an extension of the South Island Line along the island’s west shore. According to the report, the extensions now under construction would bring rail service to 70 percent of the territory; the ones described in this proposal would go a long way toward serving the other 30 percent. Hong Kong’s rail network carries about 4.5 million passengers daily and accounts for about 40 percent of all public transport trips; officials claim the added service would ease the strain on existing lines and reduce reliance on road transport.

Total cost of the proposed extensions is HK$110 billion ($14.2 billion U.S.), and the government estimates the new additions would generate HK$30 million-$40 million in economic benefit per year at current prices. Further studies and public comment are needed before these plans can advance to a more concrete stage.

Indy Poised to Build Nation’s First Trolleybus Rapid Transit Line
Among the thousands of projects that received funding in the 2014 round of TIGER grants is one that could lead to the development of a new type of rapid transit using a proven but largely abandoned technology: the nation’s first trolleybus rapid transit line.

Indianapolis’ Fox 59 notes that the $2 million TIGER grant awarded to the Indianapolis Metropolitan Planning Organization moves the city one step closer to construction of the Red Line, a 28-mile long north-south line running from Carmel to Greenwood via downtown Indianapolis that would be operated by electric buses drawing their power from overhead trolley wires.

The grant will pay for engineering and design studies; the cities of Carmel, Greenwood, Westfield and Indianapolis will chip in to cover the remaining one-third of the $3 million cost of the studies.

A number of U.S. cities purchased trolleybuses, or “trackless trolleys” as they are also known, in the 1940s and 1950s to replace aging streetcars, but most of the cities that operated them eventually took down the wires. Seattle and San Francisco have the most extensive trolleybus systems still in operation today; both cities kept their lines because trolleybuses are better able than diesel buses to scale their steep hills. Boston and Philadelphia also still operate trolleybus routes, but the proposed Indianapolis line would be the first use of trolleybuses in BRT service.

The mayors backing the “rail on tires” proposal tout it as giving Indianapolis an edge in attracting younger residents. Funding to cover construction of the line has yet to be lined up.