It’s Time to Copenhagenize – Next City 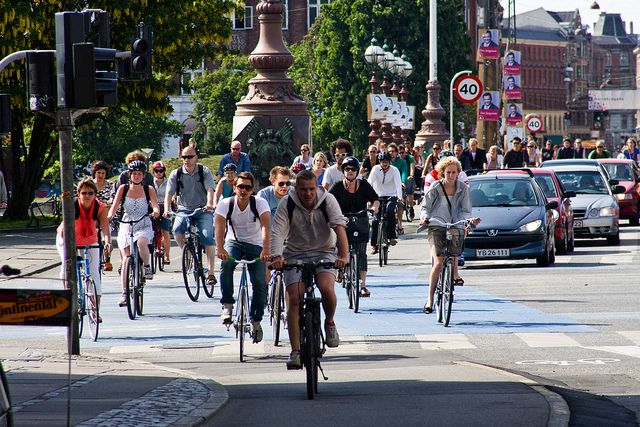 A bike path in Cophenhagen, a city widely regarded as a cyclist’s utopia. Credit: Mikael Colville-Andersen on Flickr

“Copenhagenize” isn’t a term that crops up in daily conversation. But polysyllabic clumsiness aside, the term is being used worldwide to frame the conversation about improving cities’ cycling cultures, following the Danish city’s successful model.

It’s no secret that Copenhagen is widely regarded as a cyclist’s utopia. Half of Copenhagen residents commute to school or work by bike, and the city has long shown commitment to improving its bike infrastructure, making cycling an attractive, efficient option for nearly all residents.

In April, Copenhagen opened its first “cycle superhighway,” the first of 26 routes it hopes will encourage commuters to travel to and from the city by bike. Though the existing network of bike paths in Copenhagen is well-maintained, the condition of routes connecting outlying municipalities is inconsistent, making cycling a less viable option for suburban commuters.

The routes are designed to resemble automobile freeways, but are tailored to fit cyclists’ needs with footrests and innovative traffic lights timed to average cycling speed, reducing the number of stops.

Copenhagen isn’t the first city to introduce the concept of the bike superhighway. London’s Barclays-sponsored Cycle Superhighway was launched in 2010, though it has since received less praise than its cousin in Copenhagen.

London has a bike mode share that hovers around 2 percent, while the mode share in Copenhagen is 37 percent. Reflecting this disparity, the ideology behind London’s superhighway seems less about increasing convenience for commuters, and more about spreading awareness of cyclists among the city’s motorists. Indeed, in the Barclays Cycle Superhighway promotional video, London Mayor Boris Johnson says, “The key thing is to convince people that this is where motorists can expect to find cyclists. The motorists can’t just shovel the cyclists out of their way.”

Though the superhighways include colored surfaces, signs and safety precautions, they have drawn ire from critics who fear they are still too dangerous for cyclists — concerns that were confirmed by the unrelated deaths of two cyclists within a three-week period in 2011.

A street in Bogotá is closed to cars during Ciclovía. Credit: Daniel N. Lang on Flickr

Sweden, Australia and The Netherlands have also embraced the cycle superhighway with the hope that with the growing popularity of electric bikes more travelers will be tempted to opt for bikes for longer trips. Though the idea hasn’t caught on in the U.S., “bicycle boulevards” — in effect, bike paths shared occasionally by cars — are appearing in an increasing number of cities, including Austin, Minneapolis and (no surprise here) Portland, Ore.

A report by Portland State University describes bicycle boulevards as “low-volume and low-speed streets that have been optimized for bicycle travel through treatments such as traffic calming and traffic reduction, signage and pavement markings, and intersection crossing treatments.”

In Portland, the response to the boulevards has been mixed amid concerns that the boulevards inconvenience drivers. In order to emphasize the benefits of the boulevards both to cyclists and to pedestrians, the city has christened the streets “Neighborhood Greenways,” arguing that the slower motor vehicle speeds make for safer crossings and a more vibrant street life.

Though Copenhagen, Amsterdam and Portland frequently make headlines when it comes to cycling, other cities such as Bogotá, Colombia and Mexico City are making strides in strengthening their respective bike infrastructures.

Bogotá’s Cicloruta is a network of 211 miles of bicycle-only transport lanes — the largest of its kind in Latin America. It is estimated that there are between 300,000 and 400,000 bike trips made daily in the city, a number that will likely increase as construction on the bike lanes continues.

Every Sunday, Bogotá’s Ciclovía puts 76 miles of the city’s roads off-limits to cars, leaving the streets open for the exclusive use of cyclists, skaters and pedestrians. Inspired by Ciclovía, Mexico City has adopted a similar event as part of a greater plan to make the city more bike-friendly.

In 2007, Mexico City officials promised to build 300 kilometers of bike lanes in the city by 2012. Four years later only 22.2 km had been built, prompting residents to build their own “wikilanes.” However, the rising popularity of Ecobici — the city-run bike share that was inspired by Paris’ successful Vélib program — may provide incentive to the city to ramp up work on the bike lanes. 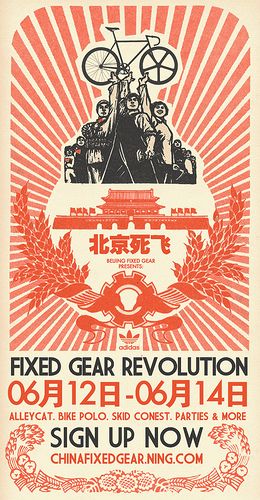 “Reverse Copenhagenization” may be the best term to describe what’s happening in Beijing and throughout China, a country once know for its robust bike culture.

In Beijing, cycling has dropped from 60 percent in 1986 to 17 percent in 2010, while car use has grown 15 percent a year over the last decade. Parked cars and rickshaws now crowd the city’s bike lanes, leaving cyclists to weave haphazardly through the traffic-clogged streets.

As China has become increasingly car-centric, bicycles have developed an image problem. Where owning a car has become a widely coveted symbol of status and wealth, cycling is considered the poor man’s mode of transportation.

Though fewer citizens may use bikes to get around, cycling as a sport is making a comeback in China. Fixed gear bicycles, or “fixies,” are also gaining popularity among Chinese youth, prompting some to question whether hipsters may in fact be the saviors of Chinese bike culture.

To encourage the rebound of Beijing’s bike culture, city officials plan to improve the city’s cycling infrastructure by restoring bike lanes, providing 50,000 bikes for hire by 2015 and adding bike parking spaces near train and subway stations. It’s a long way from Copenhagen, but it’s a start.