Its Electricity Dwindling, Cambodia is Getting Very Dark and Very, Very Hot – Next City

Its Electricity Dwindling, Cambodia is Getting Very Dark and Very, Very Hot 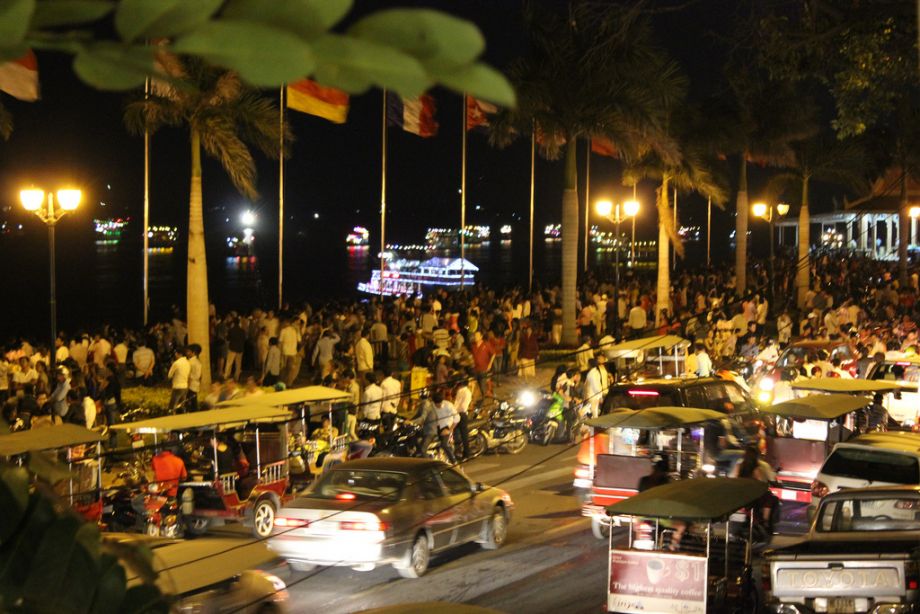 The Cambodian capital is bringing new power plants online, but rising demand is putting pressure on the system. Photo credit: Lydie via Flickr

If floods are the scourge of the Cambodian wet season, power-cuts are the scourge of the dry, which sears its way through February, March, and April, often pushing the mercury to over 100 degrees. During last year’s dry season, rolling blackouts plagued the city, generally sparing its embassies and the homes of high-ranking officials. But so far this year, the state power company has managed to keep the lights on more often, and officials say they have a plan to continue improving the system going forward, even as the city’s ballooning population puts more strain on the power grid.

With several hydropower plants soon to begin operations and a new coal plant firing up in coastal Sihanoukville, power company Electricité du Cambodge (EdC) remains confident that Phnom Penh’s chronic outages will soon be a thing of the past. In March this year, EdC announced that the “rolling blackouts” of 2013 would not be repeated in 2014, and so far, to some degree, they’ve delivered.

Nearly everyone I spoke with agreed that things have improved on the dark, hot season of 2013: dak phleung, as power-cuts are known in Khmer, are less frequent now, and are sometimes announced in advance on television. During the course of 2013, Urban Voice Cambodia (UVC), a crowd-sourcing platform that maps city blackouts, reported 700 separate instances of power-cuts. My Sovann, a project coordinator with UVC, says his organization has only received a handful of complaints so far in 2014.

But people living on Phnom Penh’s outskirts still complain that they’re left without power for hours at a time — and without warning. According to one EdC employee who spoke on condition of anonymity, authorities are still forced to prioritize which areas of town receive regular power. “Nowadays the power is still not enough for the city’s use; it is becoming very weak,” the official says, “which is the reason [EdC] has to do blackouts in areas where they think that it is not really important, to save power for some more important areas.” Despite the improved power supply, Sovann says Phnom Penh is growing so quickly that power-cuts will almost certainly continue for the foreseeable future. “There is always demand for more electricity,” he says.

In Phnom Penh’s outlying Meanchey district, Yim Bopha Thnourith writhes in discomfort as he recounts the previous night, which began when the power flickered out at about 6 p.m., and ended 12 interminable hours later, as the sun crept up over the Cambodian capital. “It’s very difficult for business and for living,” says Thnourith, 27, who owns a barber shop made of corrugated iron with mirrors mounted on two walls, two old-fashioned barber chairs and a small fan whirring above. “Two weeks ago it pretty much blacked out during the daytime, but this week it blacked out at night as well.” When the power is switched on, Thnourith says he can make between $15 and $20 per day, and up to $30 on Sundays, sleeping at the back of his shop to save on rent. But when his shop is hit by a dak phleung, the customers stay away, and his earnings drop to as little as $2 or $3. “Customers need a fan to cool them off,” he says. “Without power, I’m stuck.”

Thnourith’s story is echoed across this outer suburbs of Phnom Penh, an arc of concrete tenements, garment worker dormitories and small family homes that has sprung up over the past decade. In that time Cambodia’s capital has expanded outward in an unplanned sprawl as the economy has boomed and rural migrants have poured into the city in search of jobs on construction sites and in apparel factories. Phnom Penh’s rapid growth — the city is estimated to be growing at around four percent per year — has heaped strain on its public utilities, especially the poorly equipped power grid.

According to a UN draft report, Phnom Penh and its environs account for a full 70 percent of Cambodia’s total electricity consumption. This amounted to more than 400 megawatts in 2012, of which it received only 290, most of which was imported from Vietnam. Demand continues to far outstrip supply, especially in the hot months. In neighborhoods on the outskirts, it is not uncommon to see one power connection split into four or five, and tangles of splayed power cabling connecting small concrete rooms to the mains. The poor supply of power also means that the cost of power in Phnom Penh is among the highest in Southeast Asia, often exceeding 1,000 riels ($0.25 US) per kilowatt hour. In wealthier areas of town, large hotels, restaurants and apartment buildings rely on large diesel generators, which can be heard revving up in wealthier areas as soon as a blackout hits.

But at the Taso Café, close the Tuol Sleng Genocide Museum in Phnom Penh’s south, dak phleung have become part of day-to-day life, a phenomenon, like storms and sunshine, to be negotiated with hopeful resignation. Inside a narrow room lined with steel tables, a fan spins noiselessly and a TV blares a dubbed Chinese sitcom. Fluorescent tubes light up a simple kitchen, where 40-year-old Dan Poma and her mother Rath Samoeun whip up iced coffee and simple Khmer dishes. As if on cue, the lights switched off, the TV went silent, and the fan spun gently to a halt. “Dak phleung!” Poma and her mother said in unison, laughing. A couple minutes later the appliances sprung back to life. But Poma doesn’t expect the power to be on for long. “This is just a sort of confirmation,” she says, as Samoeun begins transferring food from a fridge to a plastic ice-box. “It’s an indication another long blackout is coming.”