It’s Been a Rough Year for Small Businesses, But Not as Rough as Feared – Next City

It’s Been a Rough Year for Small Businesses, But Not as Rough as Feared 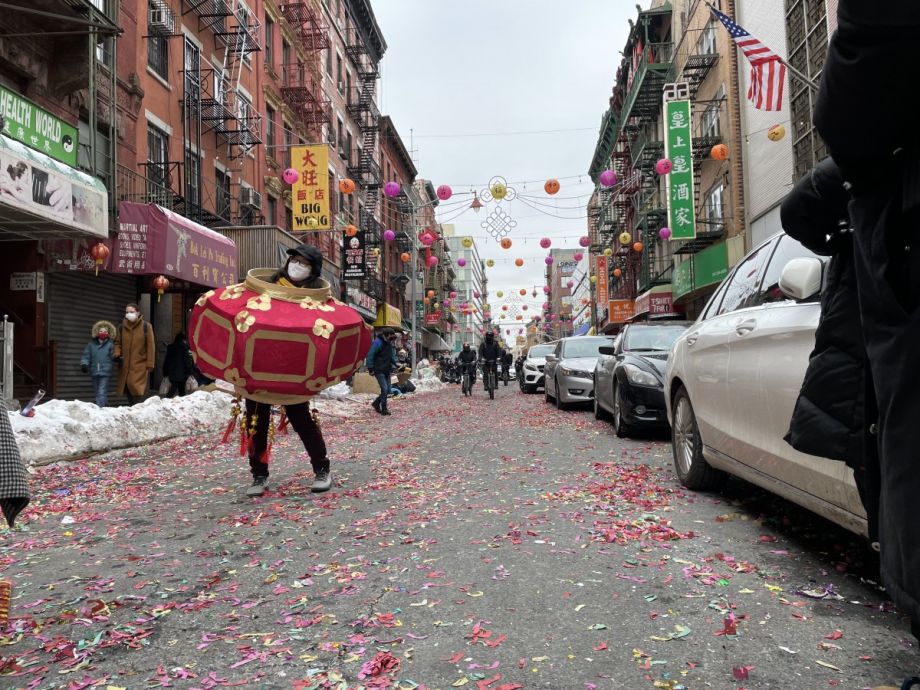 Yin Kong, from Think!Chinatown, during this year's Chinese New Years festivities. Chinatown businesses all over the country started hurting because of the pandemic sooner than elsewhere because of xenophobia and loss of tourism from China, but in Chinatowns as well as elsewhere, it seems many small businesses are slowly, cautiously, rebounding. (Photo by Oscar Perry Abello)

It’s been a rough year — but not as rough as she feared a year ago.

Renaissance Economic Development Corporation has made more than $50 million in loans to 1,200 small businesses across New York City since inception in 1997. Lee and her team currently have a portfolio of roughly 460 businesses with $9.4 million in active loans, up from 320 businesses with $7.8 million about a year ago when the pandemic first took hold.

It’s a drop in the ocean of NYC small businesses, but they’re concentrated in Chinatown, Flushing, Jackson Heights and other largely immigrant neighborhoods that were among the hardest hit by the pandemic. In Manhattan’s Chinatown and the heavily East Asian neighborhood of Flushing, Queens, xenophobia and loss of tourism from China started hurting small businesses as far back as January 2020 — which is why Renaissance had its emergency loan program up and running weeks before the Paycheck Protection Program and many others.

Today, Lee says 10-15 percent of the businesses in her portfolio are now behind on loan payments — far above the typical 3 percent at any given moment pre-pandemic. “But we originally predicted 30 percent because of COVID,” Lee says.

“That’s not to say we’re out of the weeds yet,” says Lee. “This delinquency rate is not really true until all this stimulus money is gone and businesses have to be on their own two feet. But we’re a bit more hopeful, with restaurant workers and more people in the Asian community getting vaccinated, maybe we’ll never see that huge delinquency rate. We’re hopeful maybe everyone’s been having cabin fever and will get out and start spending money. That’s the spike we’re all really waiting for.”

Looking across the country, a new study affirms what Lee’s seen. Despite seeing significant revenue losses overall, small businesses have mostly kept up their debt payments during the pandemic, according to the new analysis by researchers at the non-partisan Urban Institute think tank. Analyzing data from Dun & Bradstreet on one million businesses between September 2019 and January 2021, the researchers found that past-due payments increased only slightly nationwide, from 17.7 percent in February 2020 to 18.3 percent in January 2021. And that includes more than debt to lenders, it includes payments owed to suppliers as well.

That means that the story of small businesses mirrors, somewhat, the story of individuals over the last year of the pandemic. Things have been bad, but thanks to (some) government aid, on top of the luck and perseverance that are always a part of every small business’ story, they are not as bad as they could have been.

“I’m not trying to say things are rosy, but the combination of the Paycheck Protection Program, reducing costs by laying off workers or closing second locations, and forbearance for some, have been enough to get most small businesses through the pandemic,” says Brett Theodos, senior fellow at the Urban Institute and co-author of the new study.

“We don’t know definitively how much revenues are down,” says Theodos. “We do know it depends a lot on the industry, and many industries are doing okay or are off just 5-10 percent while others have taken quite a hit. Restaurants and other service sectors were hardest hit, and we know entrepreneurs of color were over-exposed in those sectors. ”

It was clear by last summer Black business owners were hit especially hard. According to a much-cited June 2020 study from economist Robert Fairlie at the University of California Santa Cruz, the number of active Black business owners across the country fell 41 percent by April 2020, compared with a fall of 22 percent overall.

It’s a hard pill to swallow because so much of the earliest large-scale help didn’t go to where it was needed most, but the earlier help came during the pandemic, the better.

“The businesses in my portfolio were a little bit more insulated,” Lee says. “We were giving out emergency loans much earlier, which helped cushion a lot of things. If you took my emergency loan in the beginning, and you were smart about it, you pivoted to delivery and set up outdoor dining, and you were able to stay open during COVID. A lot of people who stayed open during COVID made out really well — they were doing sales like crazy, so this became a time to expand or invest.”

Part of the lesson is in the ability of public officials to ascertain and communicate effective guidelines during a pandemic. Lee says there were more businesses she wanted to reach, if only there was enough information out sooner about how to keep her staff safe as they went about the outreach work they normally would be doing. While they have leaned even more than usual on ethnic newspapers and radio stations over the past year, door-to-door outreach has always been their bread and butter.

“One thing I do feel unfortunate about is, we couldn’t do the type of grassroots outreach that we used to, for the protection of my staff,” Lee says. “This time around, if you’re not connected to the radio or ethnic media, you’re not hearing about the programs we have available. By the time we did start doing some outreach, some had lost the will.”

As hard as that initial wave of closures hit some, it still did not lead to a spike in defaults on loans or stiffing suppliers among small businesses across the country. In some ways it makes sense — Black business owners historically have had the hardest time accessing credit, so many that might have closed simply didn’t have loan payments to fall behind on. Even for those that folded their businesses, the data suggests at least they were careful not to burn bridges with lenders or suppliers while they have been waiting to see if they can re-open successfully.

Regionally, there wasn’t much of a difference in pre-pandemic to post-pandemic levels of delinquency. The Urban Institute researchers zoomed in on eight cities — Chicago, Detroit, Houston, New Orleans, New York, San Francisco, Seattle and Washington D.C. Only in New York and San Francisco was there a noticeable but only slight uptick in delinquencies during the pandemic, and in San Francisco the overall level is still below the national average.

One of the ways that small businesses have been avoiding default has been reducing costs — often by letting workers go.

Theodos also says many small businesses clearly benefited from negotiating forbearance from lenders — restructuring loans so that missed debt payments could be tacked on to the end of a loan term without additional ramifications for the borrower.

While the ease of accessing forbearance varied largely depending on the lender, it has helped that banking regulators issued guidance during the pandemic that they would not penalize banks for restructuring loans as a result of the pandemic.

Lee adds that many of her borrowers benefited from stimulus funds that covered payments for loans guaranteed by the Small Business Administration, which included a good portion of the loans she has in her portfolio.

In terms of recovery, going forward some neighborhoods are in better shape than others, even within the same city. Lee says she’s had to spend relatively more time and resources helping businesses in Manhattan’s Chinatown seek out grants and other assistance, as they have suffered more from the lack of regular commuters and visitors from the region or from tourism. But businesses in Flushing or Jackson Heights have in some cases seen upticks because of more workers staying at home who would usually commute to Manhattan.

“In Flushing and Jackson Heights some are expanding, seeing opportunity to move into larger spaces or second spaces at low rents,” says Lee. “Some of these rents came down like 50 percent per square foot, with commercial landlords getting so desperate.”

Closed businesses and desperate commercial landlords are even attracting a wave of new businesses and borrowers from a younger generation into Lee’s portfolio.

“When I see storefronts becoming empty, a few months later I do notice new businesses coming in,” says Lee. “They’re new business owners who see the opportunity while rents are low and they’re getting long-term leases and once everyone gets vaccinated they expect their business will boom.”

For those that have survived, the recently-passed third coronavirus stimulus bill contains a raft of targeted support for key sectors, starting with $28.6 billion in grants for restaurants, bars, and other eligible providers of food and drink. The grants are calculated by subtracting 2020 revenue from 2019 revenue, maxing out at $5 million per physical location, or $10 million per entity, with the number of entities per eligible borrower limited to 20 locations.

There’s also $39 billion in new grant funding for childcare programs and providers, many of whom are small businesses or nonprofit service providers; another $15 billion in advance payments through the SBA’s Economic Injury Disaster Loan program; and another $7.25 billion for the Paycheck Protection Program.

And policymakers have taken some of the lessons to heart about the huge flaws in its earlier stimulus bills that resulted in larger, wealthy businesses taking support that they didn’t really need. For the restaurant grant program, there’s $5 billion set aside for restaurants with less than $500,000 in revenue.

“But everything depends on how quickly we get people vaccinated and going back out and living normal lives or close to normal lives,” Theodos says.