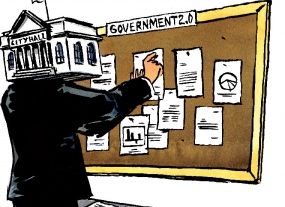 The Data Dividend
An Interview by Christian Madera

When it comes to making cities better, accurate and abundant data are powerful tools. In New Orleans and Detroit, which share many challenges — including vacant property and high crime and poverty — open data can help citizens improve their communities, officials strategize for effective change, and foundations and developers identify investment opportunities.

Denice Ross is information systems designer at the Greater New Orleans Community Data Center (GNOCDC), which has gathered, analyzed and disseminated data about New Orleans since 1997.

Both D3 and GNOCDC participate in the National Neighborhood Indicators Partnership, a collaborative effort by the Urban Institute and local partners to further the development and use of neighborhood-level information in policymaking and community building.

Amy Liu, deputy director of the Metropolitan Policy Program at the Brookings Institution, works to improve metropolitan competitiveness, development and equity, and creates, in partnership with GNOCDC, the New Orleans Index, which tracks and distributes data in the city since Hurricane Katrina. Christian Madera, who writes the Open Cities column at americancity.org, interviewed these three experts about data use in their cities, breaching the digital divide and the path to open gov.

Can you provide a quick overview of the status of open data in your city?

Kurt Metzger: Open data in Detroit is in its infancy. We have a variety of social media sites and public officials talking about new developments and new restaurants, directed at telling the story that there is life in Detroit and the region. We view our role at Data Driven Detroit as one of developing more detailed information in terms of housing patterns and public safety issues — trying to pull administrative data out of the various municipalities and make it more readily available to the public.

Denice Ross: The national movement toward open data, open government and gov 2.0 has really influenced our city in particular, and the national open gov movement has redefined what good government means at the local level. Our new mayor, Mitch Landrieu, knows that in order to be successful he has to embrace open gov. It’s also redefined what the public expects from City Hall. The opportunity for New Orleans is to adapt the lessons learned from Washington, D.C., Boston, San Francisco and Seattle, but the challenge will be that we can’t assume that our path to open government will be the same as theirs.

Amy, what is the Brookings Institution working on in New Orleans and Detroit?

Amy Liu: Brookings has a five-year history of working in New Orleans and the Gulf Coast post-Katrina. The effort has been two-pronged: One is doing analysis to improve the federal role in promoting a quality recovery from the storm. The second is called the New Orleans Index, which tracks recovery trends across housing, the economy, infrastructure, services and population. The work has changed recently from focusing on post-disaster recovery to asking how to create a great American city, and how to change the metrics to track outcomes that really matter to city and regional success. So it’s not just a data exercise, but also working with political, business and civic and neighborhood leaders in support of that. We don’t have a history of deep engagement in Detroit, though it is an important part of the work Brookings is doing around how to help an older industrial city reinvent its economy following the recession. In a lot of ways there are similarities between the stresses that New Orleans and Detroit have overcome.