What Gives With All This Pension Debt? – Next City

What Gives With All This Pension Debt? 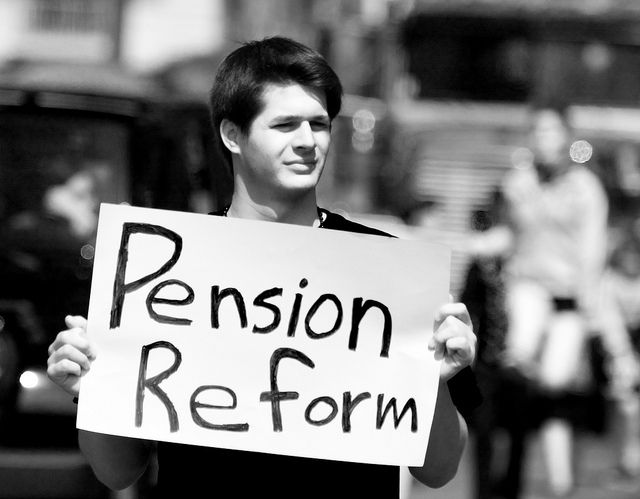 It wasn’t until Detroit filed for bankruptcy in July that pension debt started making waves in the news. Plenty of financial journalists had been paying close attention, but in the months since the Motor City’s woes hit the headlines, looming pension liabilities elsewhere started earning more attention.

San Jose is struggling with mounting pension debts. Further south in California, San Bernardino, a city that stopped paying into Calpers (the state’s pension fund), was recently ruled eligible for bankruptcy. And last week Chicago’s ballooning pension liabilities — which have been a problem for some time now — reached a fever pitch, with Mayor Rahm Emanuel hoping to push the issue down the road just a few more years to sort things out.

We called up Cate Long, the crack blogger in charge of Reuters’ MuniLand blog, to chat about Chicago, Detroit and what the future holds for city pensioners across the U.S.

Next City: So how did we get here? What happened?

Cate Long: The number-one underlying reason is the financial market imploded. If you look back, historically pensions were very well funded across the board. You always had a few juvenile delinquents, but overall pensions were well funded. Often, pensions have 40 to 50 percent of their assets in equities. So when stock markets collapse, you get these mass asset value drops in pensions.

NC: But how did cities like Chicago and Detroit get away with underfunding their pensions for decades? Why didn’t they put in the cash that financial experts recommended?

Long: There’s nobody to discipline them. Generally, it’s rare for a state to tell a city to make their full pension payments. It’s occasionally in legislation. Like in Chicago, the state tells the city to put so much in. Then the mayor goes to the capitol and gets it pushed back. That’s what Emanuel is trying to do right now, which I believe is disastrous.

NC: But there’s no way any of these pension funds are going to be fixed overnight. Do you think we’ll see municipalities phase out pensions and transition to a 401k system or something similar?

Long: Exactly. If you don’t put money into your 401k, there’s nothing for new assets there to grow in value. So employees are contributing more. Many states and cities across the country are doing that for new hires. Detroit Emergency Manager Kevyn Orr announced Thursday that he’s shutting down the pension plan at the end of the year.

NC: What does it mean for cities in the future? Chicago is in big-time trouble and isn’t the only one.

Long: It really varies by the economic condition of the city. If you look at Syracuse, N.Y., these old industrial northeast cities where population is shrinking, pension costs are going up, you have less taxpayers to fund — that kind of scenario is a disaster. But then you look at Austin, Texas. They have extremely strong economic growth: More people coming in, more taxpayers, more houses built. They can fund challenges that they have in their pensions, because they have increasing revenues.

A number of pensions in the United States have nothing to worry about. They’ve been doing a great job. When necessary to put the funds up, they voted and put the money in there.

NC: It seems like at this point, the cities that are in trouble are going to watch things play it out in court. I can’t imagine strong unions backing down on pension benefits they’ve had for years.

Long: Politicians have to be willing to fight the unions. The fixes have to be in these small little steps. Politicians have to say, look, we cannot pay everything we promised you. We have to tighten up the requirements. You have to pay more. That’s really the only way it will ever get solved. It’s painful. Watching it happen is terribly painful.

But the union’s purpose is to defend their members. So from that perspective, they’re doing what they’re supposed to do. On the other hand, it’s the fiscal reality of these places. You cannot raise taxes enough to cover Chicago’s liabilities. That’s why I think Emanuel has to go to the unions and wrestle with them. And just say, “Look, this is insane. This cannot continue.”