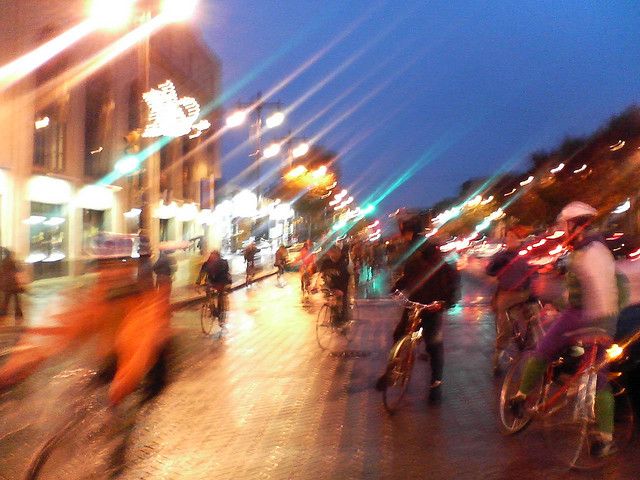 After reviewing Pete Jordan’s In the City of Bikes: The Story of the Amsterdam Cyclist- last month, I talked with Erin DeCou, executive director at the non-profit Neighborhood Bike Works, about the book and how American bike culture compares to Amsterdam’s.

Based in Philadelphia, Neighborhood Bike Works seeks to use bicycling to increase opportunities for young people in underserved neighborhoods. DeCou manages the day-to-day operations at its five three locations around the city and is working to increase its citywide partnerships to expand cycling and using bikes to empower Philadelphia’s young people. Here, she talks about biking solidarity, invisible helmets and the class divisions that permeate urban cycling.

Next City: Would you ever consider moving to a different country because it has better transportation alternatives?

Erin DeCou: Probably not. I kind of like the challenge of making do with what we have. Here in Philly, once you get comfortable on a bike it’s really fun riding around the city, even if it’s not the easiest thing in the world.

NC: You get jealous reading about Amsterdam, though, where cyclists just have so much more clout.

DeCou: In some ways, yes. They seem to be pretty creative in Amsterdam in the way they make their voices heard. But we’re doing cool things in the States, too. I just rode in the Ride of Silence a few weeks ago, and that to me is one of the coolest days of the year. The whole city stands still and silent for a few hours as we consider cyclists lost to cars.

NC: Well, and they just have way more numbers. That’s really what it comes down to, right? Critical mass. Did In The City of Bikes give you any ideas as a bike advocate?

DeCou: Well, it made me appreciate some things about our biking culture. Like how I don’t have to worry about my bike getting stolen every five minutes. But ideas? I think we have done some of the same things. All over the U.S. we have staged rides and people have laid their bikes down in the street, and that kind of thing. I think we just need to get more people engaged, to keep building the critical mass.

In a lot of ways I agreed with your the review. It seemed like there were a lot of economic factors that pushed cycling to such heights in Amsterdam. I wish we had some of those factors on our side, to be honest.

NC: Neighborhood Bike Works sponsored an event with Pete Jordan recently, right? Did he have anything to say at that event that he didn’t cover in this book?

DeCou: Yes, we co-sponsored with Bindlestiff Books a reading and book signing with Pete Jordan. One thing that he talked about was the differences in cycling language between here and there. We have this subculture of riding here, and we all know the language. If you pass someone on the street, you holler, “on your left!” And there is just a lot of solidarity, I guess because there aren’t too many of us.

In Amsterdam there doesn’t seem to be that kind of camaraderie. Everyone there is a cyclist, so it’s not like you’re part of a special club. He talked about it a little bit in the book, but basically he says that people don’t really talk to each other when they’re riding, but they just use their bells.

NC: The strangest thing about cycling to me — and this is probably why I found Jordan’s book discouraging — is the way that motorists everywhere seem to be so threatened by cyclists. New York just launched the largest bike share program in the country and it was met with what could only be described as hysteria. Apparently those who don’t ride in Amsterdam have a lot of hostility toward the riders, too.

DeCou: It seems really insane sometimes how drivers just cannot understand that cyclists have an equal right to the road. I’ve gotten yelled at a few times if I’ve gotten “too close” to a car. I’ve had people pull up beside me and roll down their window and say, “next time I’ll run you over!” It’s like, really? I’m on a bike in the hot sun pedaling up this hill, and you’re going to give me trouble riding alongside you?

I am a very cautious cyclist, myself. I would like to see different rules come into play for different groups of cyclists in Philly. Jordan brings that up when he’s talking one of the busy intersections in Amsterdam, and how after decades of arguments over traffic rules, they finally made it so that the cyclists didn’t have to stop at all. They have the right of way, and cars have to make a full stop. I love that solution.

NC: Folks have talked about “Yield on Red” as the rule for cyclists in America. That’s what they do in Idaho, too.

DeCou: As a cyclist, you get used to a totally different tempo in the city. You get comfortable anticipating the time between a yellow and a red light, and have a sense for how fast a car will catch up to you or cross an intersection. I think a lot of drivers don’t understand. In most cases, cyclists are much more aware of all of the things going on in a road than a driver would be. I mean, there’s no barrier.

NC: In this video, two young women in Sweden have invented a bike helmet you can’t see. Impressive, surprise ending.

DeCou: Wow! Personally, I don’t mind wearing a helmet. I don’t really understand why it’s such a big deal for people. Such a little thing can save you from major injury.

NC: At the end of it, they say that cars are yesterday. Bikes are the future. Do you think that could possibly be true?

NC: What’s next on the bike advocate agenda, then? It seems like cyclists have been shutting down cities for years, but it doesn’t seem to be changing a ton.

DeCou: I think bikes are gaining in popularity. But there are huge groups of people who still think we’re nuts, but every time gas prices go up people start biking more.

NC: Jordan’s story more seems to say that you get the cyclists first and then policy catches up, not vice versa. He makes it pretty clear that cycling survived and thrived through decades of pretty hostile policy. Like when Amsterdam had its era of the 7.5-miles-per-hour speed limit. That’s like asking drives to keep it at 20 all the time.

DeCou: I think one influences the other. More bikers means better bike policy, but at least in Philly, better bike policy really does create more riders. Like the Spruce/Pine bike lanes, and the new bike lane on the South Street Bridge. Those paths have made so many more people ride bikes in Philly. The Bicycle Coalition has studied bike lanes in Philadelphia and shown that they increase ridership.

NC: Does Neighborhood Bike Works see kids graduate from its programs and turn into adults who commute by bike?

DeCou: Yes. Biking is a way of life. After kids spend a lot of time with us it really becomes a part of their lifestyle. One thing that I thought was interesting in Jordan’s book was the bit about cycling demographics. You know, when he was talking about Theo Van Gogh’s murder? One thing we’re seeing in Philly, and I would guess in most other American cities, is that minorities don’t have as high ridership levels as Caucasians. Yet, most of the kids we serve at Neighborhood Bike Works are African Americans, so it’s exciting to me that we’re actively engaging groups of people that are not traditional cyclists. I was at the big bike race in Philly yesterday, and didn’t see one African American cyclist competing. Out of 180! There may have been one or two I didn’t see, but it still bummed me out.

NC: Do the Philadelphia kids you work with ever talk about those sorts of class tensions? About not wanting to be seen riding?

DeCou: I’ve never heard them talking about it. Actually, I see the opposite pretty frequently. We run a Race Team program for our youth graduates. They’re so proud of being cyclists that they often spend all afternoon, and ride home to their neighborhoods, in full kits (that is, biker spandex).

But I think it takes awhile to get to that point. We create a whole community around cycling at Neighborhood Bike Works and then they find the pride in cycling. And it’s great because then they take that pride home with them and can help persuade others to become cyclists.

Bicycles are just so simple. I think bicycle advocacy is important, but in the end I think it’s equally important that we keep living our lifestyles the way we want to, which for you and me will always include biking. And it’s enjoyable. We just have to keep that in mind and not get hung up on how far behind we are. I’m looking at the cover of In The City of Bikes, where there’s a picture of someone pulling out a bike that is covered with snow. Jordan’s book reminded me that bikes can do just about anything, so I am going to stick it out through rain and snow, as much as I can, from now on.