Mayor Ralph Becker on Completing the Streets of Salt Lake 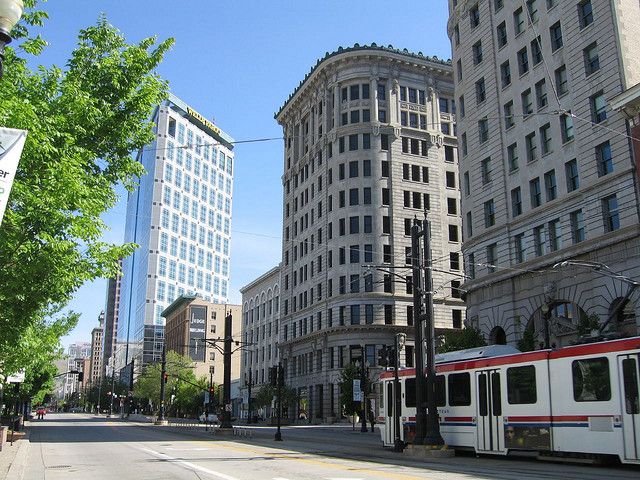 As we prepare for the 21st Congress for the New Urbanism conference later this spring, Next City will run interviews with a number of the event’s speakers.

Ralph Becker became mayor of Salt Lake City in 2009 and quickly established himself as a premier smart growth advocate in the Wasatch Front region. The bike-riding Hizzoner immediately set out on an agenda to grow and better connect the transit system in a city that sprawls between two mountain ranges. This year so far, Salt Lake City has seen the launch of a bike share program and the continued expansion of a new streetcar line serving the Sugar House neighborhood.

Becker took a few minutes to talk to Next City about a number of transportation developments, what happens when his policies meet local resistance, and completing damn near every street in Salt Lake City.

Next City: The Salt Lake City Council might vote on an extension of the existing Sugar House streetcar line in May, and I know that you already have light rail and commuter rail systems. How would you explain to an outsider what sort of transit connections are still needed in the city? 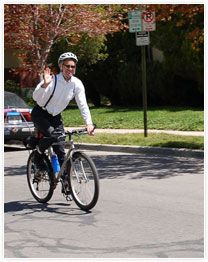 Becker on a bike.

Ralph Becker: We have now the beginnings of a very strong commuter rail network. Salt Lake City is the hub for this whole region. We’ve got commuter rail coming into Downtown, five light rail lines coming into Downtown, and they have all been completed ahead of schedule and under budget, as our Utah Transit Authority likes to say. So we’re in really good shape for what a lot of us would call the backbone of a rail system.

The area that suffers is the vessel system for our transportation. That’s buses and streetcars. We’ve got one streetcar line in Sugar House. It will be completed in December. How that line gets extended will being to build what we expect will be a network of streetcars, which are neighborhood circulators and neighborhood-to-neighborhood connections. And then as well — hopefully, soon — developing a much more robust bus system. We have buses here. In some respects they’ve taken a bit of a hit with the development of our rail systems, just because of major reductions in revenue for our transit agency and the commitment and need to complete the rail.

We’re now looking at fully fleshing out our transit system. We have a Downtown streetcar line that is just going into the alternatives analysis phase under the federal system, and we really hope we can move forward with completing the selection of corridors and begin development of that in the next few years. We have a streetcar line from Downtown to south Davis County, which is the suburban area just north of Salt Lake City, that is in the study and decision-making phase as well.

NC: In recent years, almost every major development project that’s made urbanists swoon has involved some degree of public-private cooperation. Can you give a brief primer on Salt Lake City’s approach to engaging the private sector in various transit-oriented development projects?

Becker: Every project we do we look at it being a partnership — with local other government entities, with the state, with the federal government and with the private sector. We opened just two weeks ago our bike share program in Downtown Salt Lake, called GREENbike. It is funded 30 percent government, 70 percent private. Our development of the improvements along the airport light rail line that we just opened two weeks ago Saturday was a partnership between Salt Lake City and the Utah Transit Authority, but we also relied on a special assessment to help make improvements along the line and the redevelopment of a whole roadway corridor into a wonderful complete street, as an arterial road.

So the private partnership is key, as are all of our public partnerships.

NC: In addition to transit, you’ve pushed for a complete streets policy. Ideally, what sort of streetscape will Salt Lake City have by the end of your second term?

Becker: We have moved quickly — and will continue to move, hopefully even more quickly, now that we have our policies fully in place — toward having every one of our streets a true complete street, that accommodates all modes of travel well and allows us to move throughout our city through whatever preferred mode someone has. I don’t know that we’ll have that done on every street, but certainly in every part of the city with corridors available.

One of the challenges is that every time we make changes in our roadways, there is resistance along that roadway. Sometimes it’s fear of change and increased congestion. People’s sense of how they can get around in their vehicles is usually where it’s coming from. Sometimes businesses are concerned. And sometimes we will find the implementation of our streets held up. I have taken a very firm stand that we will not do a roadway improvement without it being a complete street.

For example, we have one street, called Sunnyside Avenue, where we held up repaving the street because the neighborhood, and the city council representative of that neighborhood, had sort of an uproar over us implementing complete streets. And I said, well, until we get it worked out we just won’t make improvements on that roadway. Hopefully we’ll work through that pretty quickly and get that worked on this year, because the roadway does need to get rebuilt. But it’s a very firm commitment by me and by this administration that we fully implement complete streets. Sometimes it’s a little painful, but I think the end result is positive all the way around for the city.

NC: In a talk last year at the Presidio Graduate School, you stressed that you are aiming to achieve “the kind of community that is descending upon us whether we accept it or know it or not.” What would you say to local city governments that haven’t taken the same steps Salt Lake City has?

Becker: I don’t like to suggest that I know the answers for any place outside of Salt Lake City, and sometimes I don’t know them all for Salt Lake City, that’s for sure. But it’s critically important for us who are in community leadership positions, and particularly if you’re a mayor, that we establish a clear vision that is reflective of our communities, and to be continually reminding people to accomplish what we want as a city: There are things we have to do to change our current practices and facilities. And then we have to be strong enough to make sure we carry that out.

NC: What was the state of sustainability in Salt Lake City when you first got into local politics? Was there a significant smart growth or pro-transit movement?

Becker: I would say there was a strong desire within the community for sustainability measures and goals, and I think that was reflected in discussion and in advocacy by my predecessor, Mayor [Rocky] Anderson. What I did not see was a consistent and active carrying out of those measures and goals. I’ve taken it upon myself, and have brought people around me that have the capability, to make sure that we aggressively pursue those measures as the highest priority for this city. It’s enabled us to get things done, we’ve got a lot more to do, and I’m looking forward to continuing to work on it.