How to Bring More Artists Into City Planning – Next City

How to Bring More Artists Into City Planning 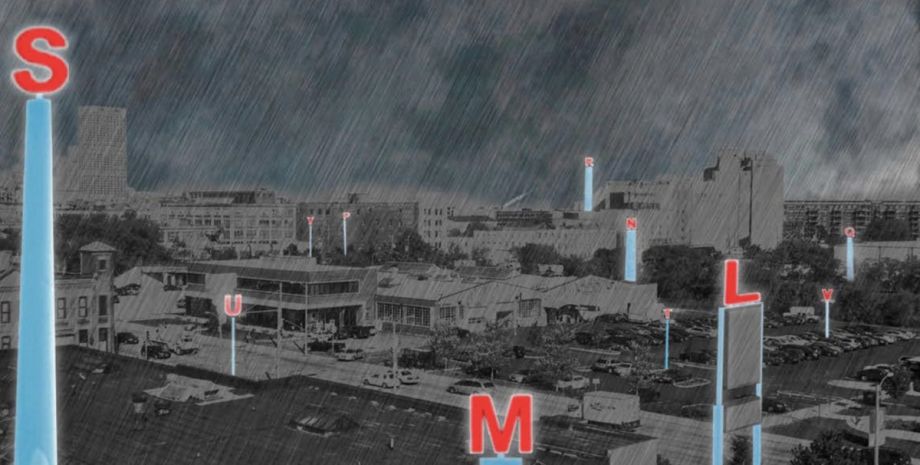 Lettered pole markers are part of a mapping of the water system in Milwaukee for a City as Living Laboratory project.

Mary Miss has worked at the intersection of sculpture, public installation and landscape design for decades, and she believes that artists are a resource city agencies aren’t tapping effectively.

Artists can speak to issues of sustainability and equity, she says. They can call attention to often invisible infrastructure and get communities to care. But, she says, “I realized that I couldn’t just go into the city planning office and say, ‘Here’s this great way you can start thinking about artists.’ I needed some examples.”

Now, with evidence under her belt, she’s serving as the first artist-in-residence at New York City’s Department of Design and Construction (DDC). Having visualized historic flooding patterns in Boulder, highlighted the streams of Indianapolis, called attention to the architectural guts of New York’s Union Square subway station and more, Miss is currently developing a framework for other artists to work with and within this city agency.

She’s also working to document and codify the approach her nonprofit, City as Living Laboratory (CALL), has taken to encourage and facilitate socially minded projects for the past six years. The key, she says, is to integrate artists early — and get cities to value them.

“I’ve been doing public art all of my career, and really since the ’70s, I’ve felt artists should have a more central role in our cities and addressing issues. ‘Percent for art’ is fine,” she says, referring to popular programs that set aside 1 percent of capital project budgets for public art, “but usually you come in after the fact and late in the game.” In the past 30 years, just 337 percent-for-art projects have been installed in the city, while thousands of construction and infrastructure projects have been undertaken in that same time.

At DDC, Miss is studying how artists might initiate their own projects within the agency’s area of concern. Her mandate is no less than to change the culture of an agency known for its sometimes difficult relationships with architects. Miss has met with DDC staff to hear their ideas on artist-initiated projects, and arranged public events. On Earth Day in April, despite a chilly rain, she facilitated a series of one-hour talks among artists and DDC engineers, landscape architects, and others.

At an NYC DDC tent set up during an open streets summer program, a city engineer and Mary Miss talked with passersby about New York's infrastructure.

The idea, she says, is to get DDC staff to understand what an asset artists can be. Miss points to a recent New York Times article about how the city’s new bioswales, installed en masse to capture stormwater runoff, are collecting trash and weeds, and annoying residents. “Nobody really thought about how you could make what those are doing apparent to people,” she says. Without seeing how these sites are connected to the larger project of managing stormwater and preventing flooding, she can understand why residents wouldn’t feel compelled to care for them.

By contrast, for an ongoing project in Milwaukee — a city that is aggressively trying to address stormwater and sewage overflows — Miss is trying to make residents aware of their role in the water ecosystem. The focal point of her project is to light the water treatment plant’s stack so that it glows blue most of the time, but turns red the night before it’s forecasted to rain. Through education, residents will understand this as encouragement not to run their dishwashers or washing machines or take baths until the storm has passed.

“You as an individual can become part of the green infrastructure,” says Miss.

A policy inspired by this approach might bring on artists whenever a new public building is under construction, or when a street is being torn up to install a new water main. These projects can be disruptive for locals, but also educational. “How could they come to appreciate what that infrastructure is doing for them?” Miss asks.

When it comes to integrating artists at DDC, Miss offers three potential pathways: Artists could be hired as liaisons between a construction project and local residents, before, during and after construction; they could be brought on as a member of the design team; or they could apply to DDC as fellows. DDC might announce its upcoming projects and invite artists to submit proposals. Or they could work with local community organizations to let them pick appropriate artists and projects. 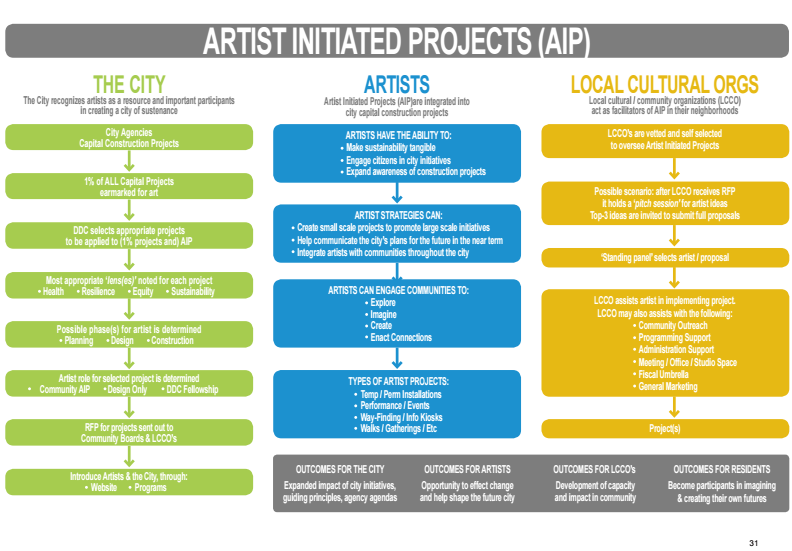 Money is always a barrier to hiring artists, but Miss says these suggestions could take advantage of existing positions. Many projects already hire community liaisons, for example. The artist-in-residence program could be split into fellowships for three to five people a year.

She just wants to be sure their work is realized. In the ’60s and ’70s, she says, there was an earlier wave of interest in integrating artists into city design teams. Miss herself sat on a charette about redesigning the plaza in front of New Orleans City Hall. “And I became very disillusioned, I have to say,” she recalls. “You come up with these great ideas, and nothing happened.”

Now, Los Angeles’ DOT has its first artist-in-residence. The Canadian city of Calgary has taken an artist-integrated approach to its water system. Miss says these programs provide a level of access that would otherwise be unthinkable for artists. But they usually pay modestly. It’s the classic artist’s dilemma — low pay, but unparalleled experience and exposure.

“We defeat ourselves in a way by agreeing to do that, but on the other hand we’re trying to make it seem possible,” says Miss. And that’s her main goal with CALL: to create examples of what is possible when creative thinkers are asked to take on the city’s problems, from an emergency preparedness kiosk in a Harlem housing project, to turning Broadway into New York’s green corridor.

Next week, City as Living Laboratory will host a workshop in Washington, D.C., about pairing art with sustainable development.