Inglewood Housing Justice Group Mulls Its Next Steps – Next City 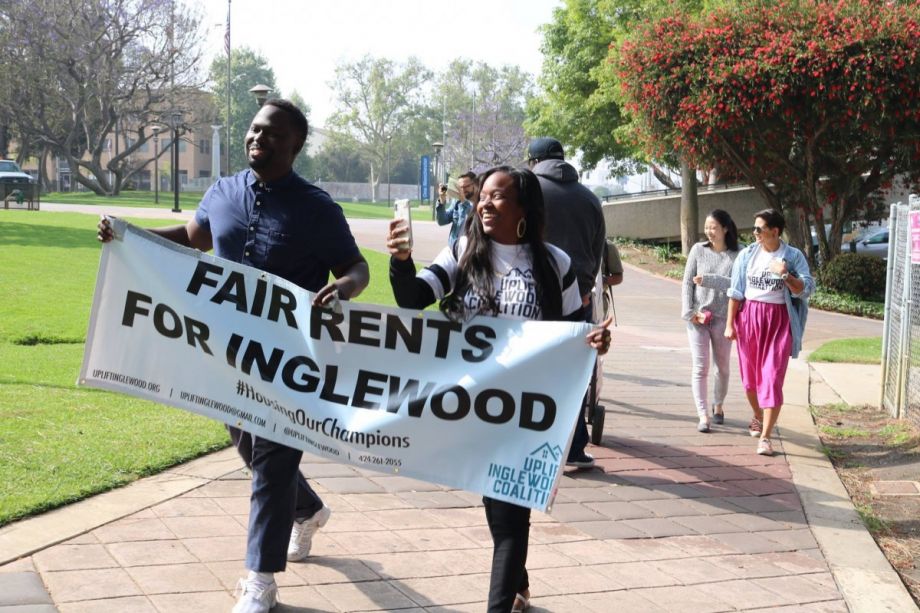 After a historic rent control win, residents and activists in the largely black and Latino city of Inglewood are not just celebrating their hard-fought renter protections, but they’re also envisioning how the increasingly booming city could further benefit its working-class residents.

“Rent control is only one piece of the puzzle,” says Jelani Hendrix, a member of the housing justice coalition Uplift Inglewood. “Now we’re trying to figure out what are other things we can advocate for to make sure that the development that happens in this city is community centered and is community driven.”

Inglewood, which has historically suffered years of disinvestment, is going through a development boom. Construction is moving forward for the 2020 opening of the NFL stadium — a $2.6-billion project that many residents see as the reason why their rents are increasing. The city is also getting access to a new rail line and thousands of market-rate apartments. An arena for the Clippers is also in the works.

Activists in Inglewood — a city where 60 percent of its residents are renters — are thinking outside of the box. Instead of market-based approaches, they’re talking about investment in cooperative economies and community land trusts. Uplift organizers say their group isn’t against development as long as it allows residents to reap those benefits.

When his rent increased around 2015, Curry helped organize a group of neighbors whose rents were also going up. He realized rent hikes were happening across the city, so he reached out to a range of community groups in the area that then banded together as the Uplift Inglewood coalition. The group is made up of local clergy, business owners, educators and longtime residents. It includes groups like faith-based LA Voice, the Youth Justice Coalition, and the Social Justice Learning Institute.

At that time, the city of Richmond in Northern California had just passed a rent control ordinance and “that really helped to inspire the work we set out to do as a coalition,” Curry says.

The group says it pressured city elected leaders to take a stance on rent control and hosted town halls at churches with candidates during election season. Members held housing legal clinics at community centers. They produced social media videos documenting residents who were struggling to remain in the city and featured local landlords who opposed unjust rent hikes. Uplift also sued to block the Clippers arena as part of its Homes before Arenas campaign.

Uplift Inglewood is one of many housing justice movements happening across Los Angeles County. A number of actions have been led by the L.A Tenants Union, which has helped renters across the city form associations to demand better living conditions and to protest rent hikes. The group has organized rent strikes in communities like Highland Park and Boyle Heights.

Pastor Victor Cyrus-Franklin with Inglewood First United Methodist Church said it was a “natural alignment” for his congregation to be involved in issues surrounding housing justice and rent control.

“We emphasize that one of the lessons of Jesus was to love your neighbors,” Cyrus-Franklin says. “One way to love our neighbors is to advocate and fight for each other to stay neighbors.”

“Pressures coming from external forces and corporate forces … to push us out rips away the social fabric of our community,” Cyrus-Franklin adds.

Cyrus-Franklin and others from the congregation canvassed neighborhoods as they sought signatures to help Uplift Inglewood get rent control on the ballot in the city. Uplift submitted about 14,000 signatures, 4,000 more than needed, but more than half were found to be invalid.

But months later, rent control gained momentum when a photo of what appears to be a rent increase notice spread across social media. It showed a landlord notifying an anonymous tenant that their monthly rent would increase from $1,200 to $2,725. The post was retweeted nearly 2,000 times on Twitter.

“People from all over the country were able to see what was going on,” Hendrix says. “There was a lot of people saying that people were not going to be displaced … but when that post went viral, the proof was in the pudding.”

Activists rode this wave of momentum for months.

For Hendrix, it’s important not to lose sight of their rent control victory.

“This is a historic win not only for Inglewood, but for every community throughout the state of California that’s facing a housing crisis,” he says. “We hope the work that we’ve done over the last few years inspires others to do the same in their city and makes sure that some of the most vulnerable residents in the city are able to stay and reap the benefits of the development once it’s here.”