INFOGRAPHIC: Nobody Votes for Mayor Anymore – Next City

INFOGRAPHIC: Nobody Votes for Mayor Anymore 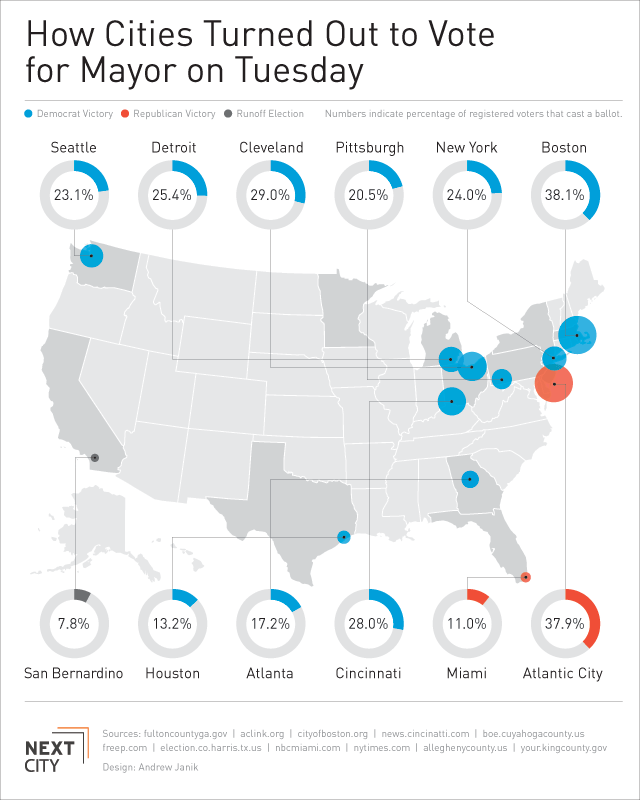 From Atlanta to Detroit to San Bernardino to New York, many U.S. cities elected a new mayor on Tuesday — and apathy continues to reign supreme. Nobody votes anymore.

Last November, 57.5 percent of registered voters cast a ballot for president. Just one year later, with cities facing issues from ballooning pension debt to casino approval, there were short lines, if any, at the polls. This, despite the fact that these elections will influence your day-to-day life and tax bill more drastically then a presidential election. Cities are ground zero for reform, not Washington.

Whether it’s housing policy, minimum wage or a focus on local sourcing for public projects, municipal elections — and specifically, who winds up in City Hall — will have a much greater direct impact on your life than President Obama ever will, Obamacare notwithstanding.

We compiled unofficial turnout data for what we felt were the most important mayoral races that went down yesterday. The numbers are unofficial, which means they are subject to change. But there won’t be a swing of 40 percent. If you have any stories about low voter turnout at your polling station, please share them in the comments below.