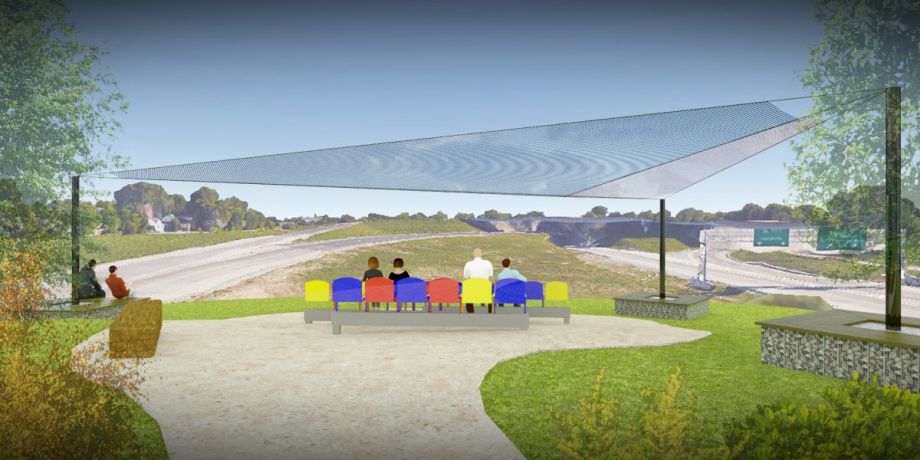 Rendering of the view from the Idle (Credit: Kurt Nettleton with Big Car Collaborative)

Indianapolis will soon have an oasis in the unlikeliest of places: a grassy hill between two interstates. The brainchild of local restaurant owner (and Jimmy Buffett’s stage manager) Tom Battista, “The Idle,” as the project has been dubbed, will be a simple, low-cost viewing stand where idlers can watch the traffic pass them by. Battista also hopes it strengthens the connections among four neighborhoods: Fletcher Place, Holy Rosary, Bates-Hendricks, and Fountain Square, which were severed when the interstates were built.

“After the ’60s and ’70s, not only did the interstates wreck our town and go right through the middle of it, the banks all redlined the [surrounding] districts,” says Battista. The areas where roads dead-ended into the highway fared poorly. In recent years, the completion of Indianapolis’ 8-mile Cultural Trail has linked some of these neighborhoods back together, but Battista, who owns a restaurant in Fletcher Place, felt the grassy median between them still represented a missed opportunity.

He first noticed the green space while crossing the interstates on Virginia Avenue to get from his restaurant to the bank in Fountain Square. Though the Cultural Trail runs along Virginia Avenue, “you’re walking across and it’s like a half-mile of concrete bridges, and entries, and cut-throughs, it’s horrible,” says Battista. “It’s a total dividing line between the two neighborhoods.”

But just off to the south was a grassy hill sloping down to the highway, which is below street grade. Battista climbed a guardrail to look around. Nonprofit Keep Indianapolis Beautiful had planted trees on the 1-acre plot, and he was surprised to find the space oddly peaceful. The noise of the traffic wasn’t too loud; the skyline was visible in the northwest. He admits it doesn’t sound like a beautiful spot, but swears once he takes people to check it out, they see the appeal. 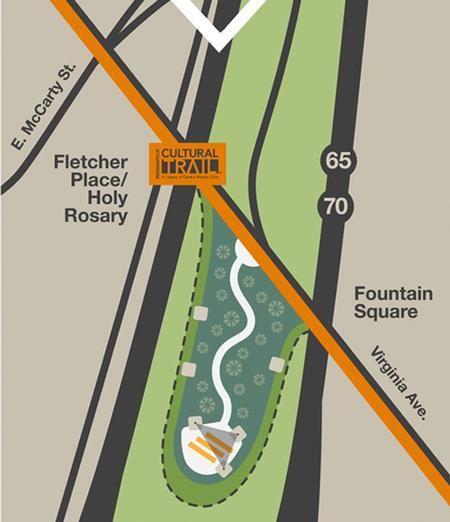 “You’re sitting there, and you’re present right there. All the people that are in their cars, the river of cars down below, they’re trying to get somewhere. And they’re trying to get somewhere fast. And when it gets to be rush hour and everything slows to a crawl, you can just feel their anxiety,” he says. “And you’re sitting there saying, god, where are all of these people going. So your blood pressure is going down and theirs is going up.”

Battista says he wasn’t inspired by the large window on the High Line that lets visitors watch cars speed by on 10th Avenue on New York City, but “it did reinforce the idea that people would sit and watch traffic,” he says.

For The Idle, Battista envisioned something a little more secluded: a snaking path leading down from Virginia Avenue to a viewing stand, with repurposed stadium chairs and a fabric awning reclaimed by local group People for Urban Progress. A new entrance to the hill would be cut from the guardrail, right off the Cultural Trail.

“Although everybody said it’s a great idea, the people from INDOT said well, we’ve never done anything like that,” says Battista. They needed approval from the Federal Highway Administration, which owns the land, and couldn’t get it. After four and a half years of agitating for his vision, Battista got a meeting with FHA officials. They asked for more detailed plans and drawings — they were supplied by landscape architect Jeff Brown and civil engineer Jennifer Roberts — but also tried to put a damper on his hopes.

Then a new INDOT director added support for the project. The city agreed to be the responsible party. They came together with FHA to make a deal: The Idle could be on the space for 10 years, and FHA would retain the right to take it back if and when they want to expand the highway.

Now, the only barrier is funding. The Idle is currently trying to raise $41,000, which will be matched by the Indiana Housing and Community Development Authority if met. With 23 days left, the campaign is over halfway there.

The first step of implementation will be to surround the whole site with fencing to keep people off the highways. Benches made from ash, a tree that has fallen victim to disease in Indianapolis lately, will also be positioned at the entrance from the Cultural Trail. So will a cheeky art installation, a nod to the appeal of The Idle as a semisecret spot: A sign at the entrance will read, “Danger! Enter at Your Own Risk!” Another sign, closer to the stadium seating will read, “Even more danger!”