In the Wake of Crisis, Talking About the Future of Affordable Housing – Next City

In the Wake of Crisis, Talking About the Future of Affordable Housing 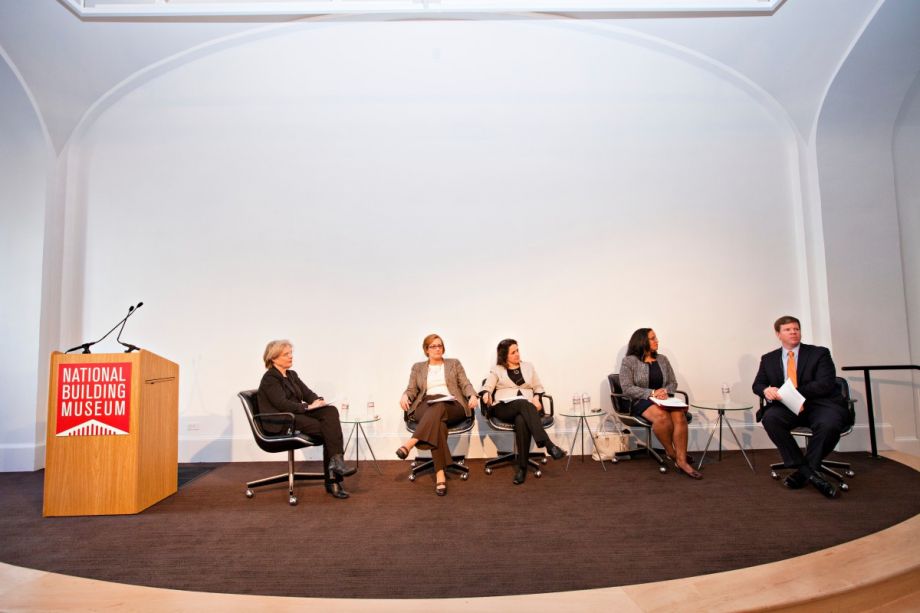 On Monday, just days after the U.S. Senate Banking Committee held the second in its series of hearings addressing the need for reform of the Federal Housing Administration (FHA), Next City convened key leaders in housing, lending, real estate and government to discuss the future of affordable housing policy. Hosted at the National Building Museum in Washington, D.C., the midmorning panel discussion drew a crowd of nearly 200 people –– from government workers to academics, ranging in age from young college students to retirees. Stream an audio recording of the program or download an MP3 file.

In the wake of the foreclosure crisis, the FHA is under increased pressure and scrutiny, yet their role in ensuring underserved borrowers have access to credit, particularly in times of crisis, is indispensable. Moderated by Susan Wachter, Co-director of Penn Institute for Urban Research, the panel included Carol Galante, FHA Commissioner and Assistant Secretary for Housing; Lisa Hodges, Senior Advisor, Oystertree Consulting Mike Malloy, Mortgage Policy and Counterparty Relations Executive for Legacy Asset Servicing and Consumer Banking, Bank of America; and Sarah Rosen Wartell, President, The Urban Institute. The panel discussion was sponsored by Bank of America and held in partnership with Penn Institute for Urban Research, The Urban Institute and National Building Museum.

Over the course of nearly two hours of discussion, the panel came to consensus that the Federal Housing Administration has been critical to balancing the housing market during the Great Recession. Wartell spoke about FHA’s “counter-cyclical role” where in it continues to insure mortgages when the private market has deemed lending too risky. As a result, the FHA’s balance sheet could look better. An actuarial report released late last year revealed that FHA’s Mutual Mortgage Insurance Fund has a negative value of more than $16 billion. Wartell suggested that FHA needs to be more nimble in attacking problems when they arise — that won’t be easy to solve since Congress legislates many of FHA’s activities. She also called for better analytics that would allow FHA to understand how the housing market is evolving and how to adjust itself.

But the conversation didn’t just focus on the past. Galante noted that FHA’s incoming portfolio of insured loans is profitable and healthy, setting the stage for a more robust FHA. Hodges presented several interesting ideas about how FHA could do a better job in the future. She focused on the need for better counseling for homeowners, as well as better partnership at the regional and local level with housing authorities that have a better sense of conditions on the ground. She also proposed an innovative solution to the perpetual problem of saving money for a down payment — a kind of mortgage savings account that would better prepare people for the monthly mortgage payments. (It’s an idea Next City will write more about next week.) Malloy also spoke to the critical need for homeownership counseling, but noted it was important to help build people’s financial literacy overall.

Still unanswered was the question of how big a role FHA should have in lending, and whether FHA is crowding out the private market in cities (FHA insures about 75 percent of all first homebuyers’ mortgages and accounts for two-thirds of loans to African Americans). What was clearer from the discussion is that FHA performed its role as a backstop during the financial crisis and is continuing to refine how it can better serve the public.

Gallery: The Future of the FHA