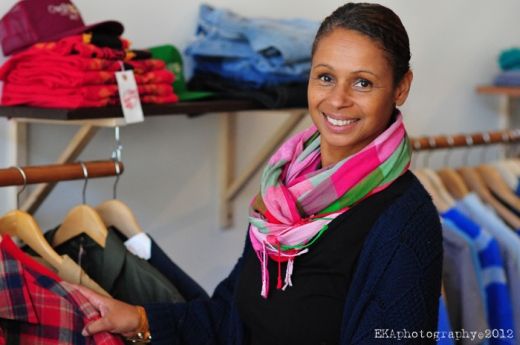 Just a few years ago, downtown Oakland was like the Doldrums from the children’s book “The Phantom Tollbooth” – a boring zone littered with too many vacant storefronts and not enough vibrancy.

That all changed with the emergence of pop-up retail shops – temporary storefronts showcasing small business owners who brought verve, flair and creativity to the district. The pop-ups resuscitated a moribund area and were instrumental in creating what is fast becoming a thriving retail corridor, with a mix of cafes, restaurants, retail shops and nightclubs.

Oakollective and the Betti Ono Gallery, two key players in what’s being called the Oakland renaissance, are pop-ups no longer. Oakollective’s co-owners, Penelope Adibe and Rachel Konte, have each moved on to open their own brick-and-motor stores, which they hope will become permanent fixtures. In July, Adibe opened Nneka at the former Oakollective site, 1427 Broadway. A month later, Konte followed suit with Owl ‘n’ Wood at 45 Grand. Both are hip lifestyle boutiques which mix fashion-forward style with small runs and limited-edition products, much of it from local designers.

While the pop-up trend may have seemed spontaneous to some, in actuality, it was the result of careful planning. Adibe, a London native who’s been an Oakland resident for about a decade, recalled being “perplexed as to why downtown Oakland was empty.” Coming from bustling European cities, she wondered, “why wasn’t this happening here”?

That same thought occurred to Konte, who’s originally from Copenhagen, Denmark. She remembers looking at all the empty storefronts and thinking, “There was a void in Oakland.”

The two both took classes at nonprofit center the Women’s Initiative, which helped them develop business plans; “My dream got stronger,” Konte said. They worked with the city’s redevelopment agency, which helped negotiate a lease at the Broadway location, an enormous 3,000-square foot space. They overcame a hurdle by convincing the landlord to buy in to the concept of micro-stores, i.e. two or more businesses within one space.

Because the space was so big, it wasn’t feasible for just one small business owner to manage on their own, Adibe and Konte said. It made more sense for them to mix their respective lines, Nneka and Afro-Buddha, with Guerilla (a line co-owned by Konte and her husband Keba, a mixed media artist and proprietor of Berkeley’s Guerilla Café). The store also featured local lines, as well as a selection of vintage clothing – a passion of both Adibe and Konte.

As Adibe points out, Oakollective predated the arrival of Oaklandish and Awaken Café, two of the block’s other anchor tenants, who have similarly been major proponents of localism. As Konte noted, Oakollective wasn’t just a retail shop, it was also a destination, hosting events from dance parties to fashion events, to after-hours community meetings.

Betti Ono, meanwhile, is the brainchild of arts maven Anyka Barber. The gallery evolved out of a pilot program, Smashbox Live – a weekly art night at the Somar bar. Like Adibe and Konte, Barber took a course at the Women’s Initiative to develop a business plan. Not long after completing the program, she found out about a vacant space in the Marquee Lofts building, which she then turned into an art gallery and performance space.

Barber proudly related how, by presenting programming for a multicultural audience, Betti Ono attracted “a community of people who hadn’t really participated in [First Fridays] and were now a part of that space.”

Over the past year, the gallery has hosted everything from Youth Speaks spoken word events, to exhibitions on hip-hop and India, to solo shows by Gavin Grant, Favianna Rodriguez and Joshua Mays. It’s also been somewhat of a cultural incubator, helping to create a synergistic energy around First Fridays, in conjunction with Badd Boyz hair salon, which started hosting fashion-oriented events on the same block, as well as the Grow Sessions, a monthly live performance series featuring music, art, dance and video and sound installation, which set up on the sidewalk outside the gallery.

Reflecting on the past year, Barber said the journey from pop-up to brick-and-mortar “was really about seeing how far we could go.” Her vision was of a space, which could inspire “limitless creativity,” which she’s been able to sustain long enough to find a permanent home. In Betti Ono’s new location, she said, the plan is to have “art, music, film and conversations.” The gallery also is available for rent, for outside functions.

Nneka also showcases an eclectic worldview, carrying its own womenswear line, as well as graphic T-shirts by local lines Estilo, Dreamers Rule and Suru, handbags by Renata Martin and notebooks from By Lee.

During an afternoon visit, a selection of classic hip-hop, dancehall reggae and clubby electronica played, as a Nefertiti-esque portrait of a regal woman’s head (painted by Black Diamonds Shining/Dreamers Rule artist Safety 1st) looked on in approval. Adibe called the products she carries “great conversation pieces,” while noting that intimate boutiques with unique items appeal to today’s educated consumer who’s tired of chain stores and mall-hopping.

All three women are aware that their collective efforts have factored prominently in the city’s downtown resurgence, or as Konte puts it, “Oakland getting on the map.” Artists, Barber said, are “pulling a lot of this vibe together.”

“We’re helping to bridge the gap between retail and restaurants,” Adibe added.