In Seattle, School Is Out, But Lunch Is Still In – Next City

In Seattle, School Is Out, But Lunch Is Still In 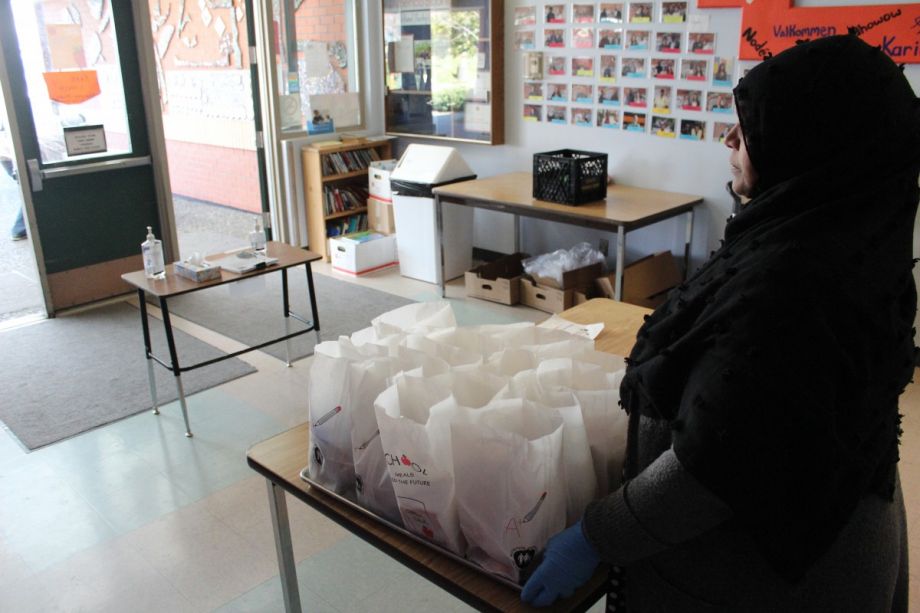 When Washington Governor Jay Inslee closed schools statewide on Friday, March 13 until at least the end of April, he assured state residents that school lunches would remain available not only to families with school-aged children but to anyone in need of a meal during the emergency circumstances generated by the COVID-19 pandemic.

On Monday at 11 a.m., a team of four cafeteria workers at Bailey Gatzert Elementary School in Seattle’s Central District was prepared with several hundred bag lunches in the school lobby, with hand sanitizer at the ready. 73 percent of Bailey Gatzert’s students receive free or reduced lunch and many live in neighboring Yesler Terrace, the city’s largest public housing complex.

While the vast majority of patrons helping themselves to bagged meals with bagels, hummus, turkey and swiss sandwiches, and apples were parents with school-aged children, cafeteria worker Cynthia, who declined to give her last name, was adamant that the makeshift lunchroom was open to all.

“The governor said don’t turn anyone away,” she told Next City.

With local food banks still in operation and Seattle residents stocking up their pantries last week before widespread layoffs sparked by the sudden closure of every bar, dine-in restaurant, theatre, nightclub, gym, yoga studio, music venue, and non-essential retail store statewide, continuity for students already on free and reduced meals has been the main goal in the pandemic’s immediate aftermath.

“We’re all about feeding kids,” Cynthia said, as she directed families to dry goods like tuna fish, mac ’n’ cheese and breakfast cereal that could help supplement household pantries. Nearby, school librarian Kevin McNew, who normally works at a nearby elementary school, manned a folding table with overstocked children’s books that are being given away for free at a time when public libraries are also closed. He told Next City school librarians citywide have voluntarily started offering the free books alongside the school lunch distribution, one example of how an official city service during the pandemic crisis may become a hub of additional, organic social and civic activity.

While the city’s response to the likely months-long pandemic is evolving day by day, school parent Ella, who declined to give her last name, was concerned that those spontaneous acts of generosity can also perpetuate inequities. “Our school is getting milk and apples while in the North End, they have huge tables of fruits and veggies,” she told Next City, showing Facebook photos on her phone — that could not be confirmed — of full grocery bags at Broadview Elementary School. At Bailey Gatzert, a limited supply of fresh produce is usually snapped up early in the two-hour lunch shift.

As the COVID-19 outbreak grew in Seattle, especially following the region’s first confirmed death on February 29, the school district’s food-services director Aaron Smith had already begun formulating a plan in case one school closed down due to an infection. Less than two weeks later, he was faced with a district-wide closure.

“We took that plan, picked out as many sites as possible that could be distribution points, and then just scaled it up,” Smith told Next City. “It was just a shift in purchasing. Instead of chicken tenders and stuff you are going to heat up and cook, we let our distributors know that you need to bring in a lot of lunch meat and 10 times more bread than we normally order, then change our central kitchen production to start producing sandwiches and salads instead of hot meals.”

The end result has been a case of better safe than sorry. With students at home, many families have been cooking meals rather than availing themselves of the free lunches. Bailey Gatzert had 39 takers that day, followed by 76 on Tuesday and 136 on Wednesday as word spread about the school lunch program. On Friday, backpacks with a weekend’s worth of food will be available. But as demand grows in the weeks and months of quarantines and economic hardship to come, Smith said, “We are prepared to ramp up to the same number we serve during the school day.” Food supplies remain uninterrupted and the district’s inventory is ample thus far, Smith said, with restaurants already offering to donate surplus ingredients.

“You’re going to see these systems mature a lot in the next week or two,” said Chris Reykdal, Washington State school superintendent.

A district spokesperson said that the school district is working with the state’s Office of the Superintendent of Public Instruction to manage the accounting for the lunches, which are paid for with federal funds.

Thus far, the district has not had staffing issues for its 100 cafeteria workers spread across 26 schools. They are hourly employees now eligible for shared leave under emergency legislation signed this week by Governor Inslee.

As school district closures fell like dominoes nationwide in the last week, cafeterias have pivoted almost overnight to provide takeout rather than dine-in, mirroring the simultaneous switch taking place in the restaurant industry. Smith has already fielded calls from his colleagues in St. Louis, Missouri, as well as Marysville and Spokane, both in Washington.

“The school nutrition world is a close community,” he said. “It’s not like the restaurants, we’re not in competition with each other. We’ve all got the same mission of feeding kids.”