In Remembering a Long-Abandoned Project, Nostalgia for Grand Plans – Next City

In Remembering a Long-Abandoned Project, Nostalgia for Grand Plans 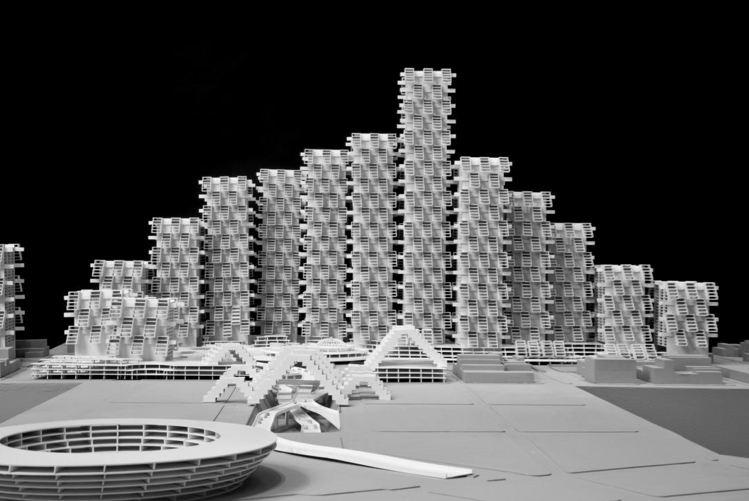 Towers hover over Lower Manhattan in a model depicting the LoMEX project. The Drawing Center

There would be, according to the LoMEX plan, a lengthy Y-shaped super-highway running the width of Lower Manhattan, from the Holland Tunnel to the Manhattan and Williamsburg Bridges. Thousands of cars would stream through the city on these new viaducts of commerce designed to connect Brooklyn and New Jersey. Above the roadway, huge new structures would be built to cover much of the trenched part of the road and reconnect the city where it had been torn up to make way for the road. Giant towers would line the approaches to both bridges as if they were gateways welcoming arrivals into the city.

It was a romantic vision for the city of the future, albeit one that would have been too expensive to build and too damaging to the existing neighborhoods to ever consider seriously. It would have encouraged car commuting in America’s most transit friendly metropolis.

And yet — as well illustrated in the recently-closed exhibit on the subject at the Cooper Union — it was a grand plan of the sort few can even dream of nowadays. Moreover, it promoted serious thinking about how to incorporate urban development into transportation development, something that is rarely seen in modern cities, whose political leadership is frequently too timid to think on the grand scale.

The LoMEX, developed by New York master planner Robert Moses and in planning for several decades, would have destroyed a huge swath of what are now some of the city’s most prestigious neighborhoods. Concerted opposition led by Jane Jacobs and others, however, put the plan to rest by the late 1960s, when Mayor John Lindsay announced that popular disapproval of the project was simply too great to be ignored.

Architect Paul Rudolph was hired by a foundation to conduct studies on how the road could be integrated into the communities through which it would run. His ideas, on full display at the Cooper Union and enshrined in a new book, evoke an intervention on a massive scale. The three-pronged freeway would be set in a ditch and new buildings would be constructed on the air rights above. On the approaches to the Brooklyn and Manhattan Bridges, towers reaching up dozens of stories high would create a veritable canyon for automobilists heading off the island. Underneath, a pod-based people mover network would transport people without cars along the axis. Buildings would be made up of pre-fabricated concrete units so the whole system could be put together quickly and cheaply.

It’s an outrageous, ridiculous proposal that should not and perhaps could not have been built; for New York’s future, it is a lucky thing that it was stopped before clearance began. The motivations behind Rudolph’s LoMEX plans were poorly suited to the needs of the New York for which it was designed: It was too automobile-oriented and it failed to recognize the importance of preserving the existing building stock to which people are so attached. Its willingness to dream, however, should inspire us to think bigger about the way we change the forms and conditions of our cities to adapt to new challenges and circumstances. But it portrayed a vision for a city stepping fully into the future, planning for new thinking about transportation and readying itself for a different way of working. Are we doing anything similar now? Or have cities like New York decided to content themselves with existing conditions?

For instance, climate change is a problem that must inform every decision we make as a society over the next few decades, and yet we are designing our cities as if nothing has changed. Where is the serious thinking about how to wall off our coastal cities from mounting sea levels, or how to let them slowly fade into the ocean? Where is the development of entirely carbon-neutral cities that ensure that their occupants are good global citizens? Where are the huge new developments being built around major new electric transit lines? Not in today’s America, where defeatism and fear increasingly appear to be the only motivators for concrete political and economic action.

When I take a look back and consider Rudolph’s LoMEX designs, thus, I’m not so much struck by what would have been its terrible effects but rather by the sheer ambition of it all, its willingness to advocate an alternative to the present. We don’t have to repeat its mistaken thinking to advance into the future — but we need to advance something.